Fact-checking Trump's speech on the US environment 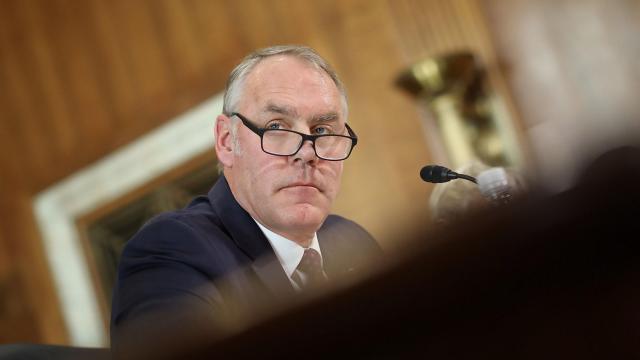 CNN — President Donald Trump sought to highlight his administration's record on environmental issues during a speech from the White House on Monday. Here's a rolling list of claims Trump made during his remarks:

Trump said "While we're focused on practical solutions, more than 100 Democrats in Congress support the so-called Green New Deal. Their plan is estimated to cost our economy nearly $100 trillion, a number unthinkable, a number not affordable even in the best of times."

Facts First: This figure is based on a $93 trillion estimate from a conservative organization, which used several questionable assumptions. The Green New Deal is so vague at this point that it is impossible to come up with an accurate figure.

At present, the Green New Deal only exists in the form of a congressional resolution that lays out broad goals but not how to achieve them. For example, it calls for "providing resources, training, and high-quality education, including higher education, to all people of the United States, with a focus on frontline and vulnerable communities," but does not say what kind of higher education, how many resources, or what the timeline for any programs would be.

The $93 trillion figure comes from the American Action Forum, a conservative group, which acknowledged that the proposal's "breadth makes it daunting to apply the standard tools of policy analysis." President Douglas Holtz-Eakin, a co-author of the analysis, told FactCheck.org that the $93 trillion figure is "not wrong, but it's incomplete," saying it would be better for people to use a range of $50 trillion to $90 trillion.

FactCheck.org noted that the analysis uses a number of assumptions that may not reflect what actually happens in the future. For example, it assumes that the universal health care system implemented as part of a Green New Deal package would be similar to Sen. Bernie Sanders' proposal for a single-payer government-run system, which it says would cost $36 trillion. That cost estimate is disputed, and it is very possible that a hypothetical Democratic president would pursue a different kind of plan to achieve universal health care.

Trump said the US is ranked "number one" in the world in "access to clean drinking water."

Facts First: This is correct. The US is tied for first with nine other countries, according to the 2018 version of the Environmental Performance Index developed by Yale University, Columbia University and the World Economic Forum.

The other countries are Canada, Finland, Iceland, Ireland, the United Kingdom, Greece, Italy, Malta and Spain.

Trump touted drops in carbon emissions at the event. "Since 2000, our nation's energy-related carbon emissions have declined more than any other country on earth -- think of that. Emissions are projected to drop in 2019 and 2020."

Facts First: This is true but requires context. According to the International Energy Agency, the United States has seen the largest absolute decline in CO2 emissions since 2000 of any country. But America is still the second largest global producer of carbon emissions and last year saw its largest increase since 2010.

According to the IEA, the US has seen the largest absolute decline in carbon dioxide emissions since 2000 -- but they note"the emission reductions seen in 2017 were reversed, with an increase of 3.1% in CO2 emissions in 2018."

Even with the increase, US emissions are hovering around 1990 levels and below their 2000 peak. The US still produces more of these emissions than any other country except for China.

The second part of Trump's statement jives with US government projections. The US Energy Information Administration estimates emissions will drop in 2019 and 2020, with lower energy consumption from what it predicts will be milder weather than 2018.

One contributor to the long-term drop in carbon emissions in the US has been less coal use -- a fossil fuel Trump has often touted and an industry he's pledged to protect. Last month, the Environmental Protection Agency said states can set their own carbon emissions standards for coal-fired power plants -- a move that the agency projected could result in 1,400 more premature deaths by 2030 than the Obama-era plan it will replace.

During the speech, Secretary of Energy Rick Perry claimed that "we're seeing, on (Trump's) watch, America become the number one producer of oil and gas in the world."

In an event designed to tout his administration's efforts on the environment, Trump and other officials discussed fossil fuel exploration, making the case that increased exploration of oil and gas in the United States is a net positive for the environment. But while those are cleaner fuels, compared to coal for instance, they still add CO2 to the environment and contribute to a looming climate crisis.

Facts First: This is true, but context is needed.

CNN's Lydia DePillis looked into this same claim when Trump made it during his State of the Union address earlier this year. Here's what she found:

The US became the world's largest crude oil producer in August 2018, when it surpassed Russia for the first time since 1999 in terms of total daily crude production, according to the US Energy Information Administration. Earlier in the year, the US surpassed Saudi Arabia's crude oil production for the first time since 1973. It has been the largest producer of natural gas since 2011.

The rise in US oil and gas production is due in large part to advances in fracking technology that allowed drillers to access reserves socked away in shale formations buried deep underground. Production dipped in 2015 and 2016 as a result of overproduction and a collapse in oil prices, but recovered quickly once supply stabilized and prices increased, just as Trump was coming into office.

The Trump administration often touts its moves to relax Obama-era rules on oil and gas production, such as one restricting the flaring of methane from fracking sites. He has also opened public lands to more drilling. It's unclear though, given the decade of increased energy production in the US, how much of an impact any of those moves have had.

Trump claimed that people in California who once scoffed at his criticism of the state's forest management policies later acknowledged that he was correct.

"You don't have to have any forest fires," Trump said. "It's interesting. I spoke to certain countries, and they said, 'Sir, we're a forest nation.' I never thought of a country -- well-known countries; 'we're a forest nation.' I never heard of the term 'forest nation.' They live in forests. And they don't have problems...Remember, management. It's called forest management. So it's a very important term. When I went to California, they sort of scoffed at me for the first two weeks and maybe three weeks and not so much four weeks, and after about five weeks they said, 'You know he's right. He's right.'"

Facts First: California's leaders did not admit that Trump was "right" in his comments on wildfires in the state.

It was not clear who Trump was talking about here. There were certainly some people in California who said he was correct when he repeatedly blasted the state's forest management policies late last year and early this year.

But the state leaders who criticized his remarks, including former Gov. Jerry Brown and current Gov. Gavin Newsom, did not ever concede that Trump was correct.

The primary subject of the dispute was not the idea that good forest management can play a role in combating wildfires. It was Trump's suggestion, rejected by scientists, that climate change is not a significant cause of the fires.

"There is no reason for these massive, deadly and costly forest fires in California except that forest management is so poor," Trump tweeted in November 2018.

Responding to the tweet, then-Gov. Brown said that "scientists and the engineers and the firefighters all tell us forest management is one element." But he emphasized the role of climate change, which Trump did not mention.

"Managing all the forests everywhere we can does not stop climate change — and those that deny that are definitely contributing to the tragedy,'' Brown said, according to Politico.

Trump also received criticism for casting sole blame on the state's own forest management practices, since the federal government manages more than half of California's forest land. Scientists and California politicians noted that forest management could not have prevented the major Woolsey Fire last year, which did not start in a forest.

And Trump was widely mocked for his false claim that the president of Finland told him the country spends a lot of time "raking and cleaning" the floors of its forests.

California's leaders never said he was right about any of these subjects.