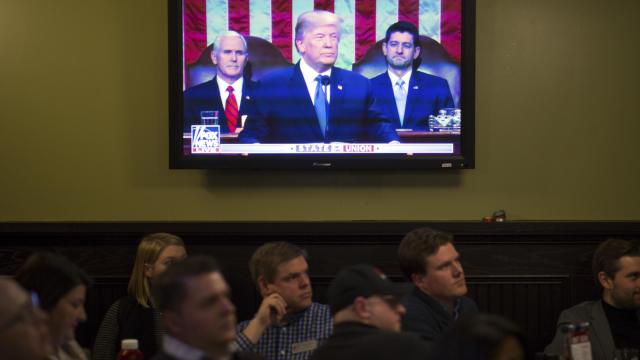 Washington — Reporters from The New York Times fact-checked President Donald Trump’s first State of the Union address. Here’s an assessment of Trump’s claims about the economy, infrastructure, the fight against the Islamic State and his achievements over the past year.

“Since the election, we have created 2.4 million new jobs, including 200,000 new jobs in manufacturing alone.”

The math is correct, but context matters. The economy has added about 169,000 jobs a month since the 2016 election, but that is somewhat slower than the 185,000 jobs per month that the economy added over the previous seven years.

“African-American unemployment stands at the lowest rate ever recorded.”

It’s accurate that black unemployment was the lowest recorded, 6.8 percent in December. But it was also the culmination of a longer-term trend. Moreover, it’s an open question how much credit a president, especially in his first year, can take for the economy.

“We enacted the biggest tax cuts and reform in American history.”

“Apple has just announced its plans to invest a total of $350 billion in America and hire another 20,000 workers.”

This needs context. Tech giant Apple did, indeed, say after the tax cut passed that it would “invest” $350 billion domestically over the next five years. But at least $275 billion of that was simply continuing the company’s past spending trends. The amount of new investment appears to be roughly $37 billion.

While it is accurate that Trump has ordered the Environmental Protection Agency to roll back regulations on the burning of coal, it has done almost nothing to revive the industry, which, economists note, was already in decline due to competition from cheaper natural gas.

“Many car companies are now building and expanding plants in the United States — something we have not seen for decades.”

This is an exaggeration. Yes, some car companies have announced new or expanded plants under Trump, but that’s hardly new or unseen “for decades.” Toyota, for example, opened a plant in Mississippi in 2011. There has been no surge in automotive employment under his tenure — it’s actually down from a year ago.

“One of my greatest priorities is to reduce the price of prescription drugs. In many other countries, these drugs cost far less than what we pay in the United States, and it’s very, very unfair.”

True. Prices for brand-name prescription drugs are typically higher in the United States than in other developed countries, which regulate prices or set them through negotiations with drug manufacturers. Drugmakers have strenuously opposed regulation of prices in this country. Cancer drugs and other new medicines sometimes enter the U.S. market with prices exceeding $50,000 a year. And a handful of companies have driven up the prices of some decades-old drugs whose patents expired years ago.

“America has also finally turned the page on decades of unfair trade deals that sacrificed our prosperity and shipped away our companies, our jobs and our nation’s wealth.”

This needs context. Economists believe the loss of manufacturing jobs has more to do with automation and globalization than specific trade deals.

Research suggests that the North American Free Trade Agreement has had a negligible effect on U.S. jobs. And China’s entry to the World Trade Organization in 2001 seems to have had a more pronounced impact on factory jobs. While Trump has abandoned the Trans Pacific Partnership, negotiations to revamp NAFTA are ongoing.

“We built the Empire State Building in just one year — isn’t it a disgrace that it can now take 10 years just to get a permit approved for a simple road?”

Trump is also overstating the process for building roads. While some bigger projects can take around 10 years to receive permits, small projects, like repaving a road, can take little to no time at all. Average wait times have ranged from three to six years over the past two decades, according to the Federal Highway Administration.

“The third pillar ends the visa lottery — a program that randomly hands out green cards without any regard for skill, merit or the safety of our people.”

False. The visa lottery program provides 50,000 immigrant visas to people from countries with low rates of immigration to the United States. An 18-page State Department guide says applicants must have a high school education or two years of work experience in the past five years that requires “two years of training or experience.”

Applicants must undergo a medical exam, cannot have a criminal record and must demonstrate they would not become “public charges.” Visa winners are then subjected to background checks that can last for months.

“The coalition to defeat ISIS has liberated almost 100 percent of the territory once held by these killers in Iraq and Syria.”

True but needs context. Trump is correct that the Islamic State has been forced from most of its previously held territory — 98 percent — in Iraq and Syria. But he is reaping the advantage of a strategy begun in the Obama administration.

U.S.-led forces had already wrested more than 13,000 square miles of territory from the group by the time Trump was elected in November 2016. Things accelerated after he gave U.S. commanders more authority to order airstrikes and make battlefield decisions. But the defeat of the caliphate does not mean the end of the Islamic State, or ISIS, as a movement or ideology.