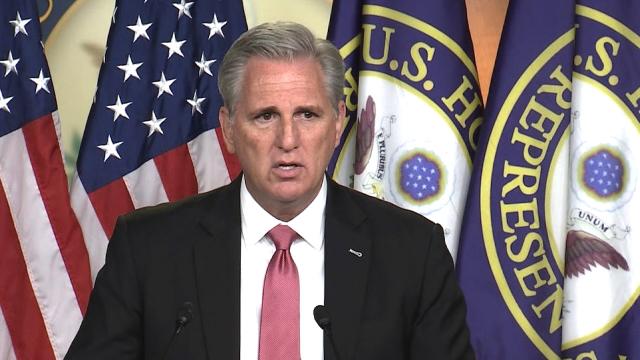 CNN — The day after President Joe Biden's inauguration, a large number of National Guard troops protecting the US Capitol moved to a nearby parking garage to rest. Outrage quickly grew among lawmakers over the situation.

As CNN reported Friday, miscommunication and confusion surrounded the incident and it remains unclear how, exactly, the decision to move the Guard members came about.

Republican and Democratic lawmakers have called for investigations into who was responsible for the initial decision.

Thursday evening, House Minority Leader Kevin McCarthy tweeted out an image of the Guard members in the garage and asked Senate Majority Leader Chuck Schumer and House Speaker Nancy Pelosi, "Why are American troops who are tasked with keeping security at the Capitol being forced to sleep in a parking lot?"

After criticizing Pelosi's opposition to the use of federal forces during last summer's riots and protests, McCarthy claimed that "after the inaugural, when these National Guard -- these men and women defending us sitting in the Capitol, she was kicking them out into the winter."

Facts First: While the exact decision-making chain of events remains unclear, CNN has seen no evidence that Pelosi was involved in removing the Guard members from the US Capitol building.

According to CNN's reporting, multiple groups including the Capitol Police, National Guard, and the Senate Rules Committee have denied blame for the event, showing a significant breakdown of communication. But none of the different accusations from these groups place blame of making the decision on Pelosi. You can read CNN's reporting here.

Pelosi's deputy chief of staff, Drew Hammill, told CNN on Tuesday, "The Speaker's Office had no role in or knowledge of this matter until news reports emerged," adding that McCarthy's staff "were briefed at the same time as our office was."

On Thursday evening, when McCarthy first tweeted asking Pelosi and Schumer why the Guard members were quartered in the garage, his spokesperson Michele Exner told CNN that "both Nancy Pelosi and Chuck Schumer oversee and ultimately are responsible for the Capitol's administrative matters."

McCarthy's office did not return CNN's request for comment on the minority leader's new claim that Pelosi personally kicked the National Guard out of the Capitol.