In the midst of Amy Coney Barrett’s Supreme Court confirmation hearings, users on social media began sharing a supposed quote from the judge, claiming she once said that "calling a Black employee the N-word does not make for a hostile work environment."

Posts sharing the alleged quote were flagged as part of Facebook’s efforts to combat false news and misinformation on its News Feed. 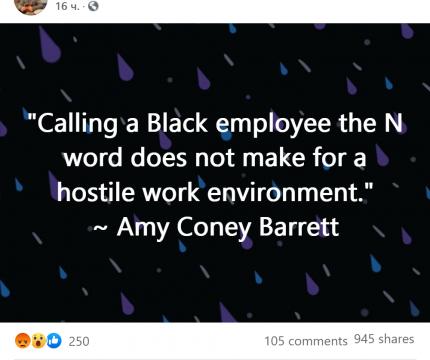 In 2019, while sitting on the U.S. Court of Appeals for the Seventh Circuit, Barrett wrote for a unanimous three-judge panel that upheld a district court’s dismissal of a workplace discrimination lawsuit by a Black employee, who claimed he was called a racial slur by a supervisor.

In the Smith vs. Illinois Department of Transportation case, Terry Smith, a Black Illinois transportation employee, sued the department under Title VII of the Civil Rights Act of 1964 after he was fired, arguing that he had been subjected to a hostile work environment and was fired in retaliation for his complaints about racial discrimination. He lost his case in district court and appealed to the circuit court.

In affirming the lower court’s decision, the Seventh Circuit opinion stated, "Given the extensive evidence that Smith was not meeting his employer’s legitimate expectations, a reasonable jury could not find that the Department fired him because of his protected activity rather than for his poor performance nor could a reasonable jury have resolved the hostile work environment claim in Smith’s favor."

In her opinion, Barrett called the comment an "egregious racial epithet" but dismissed Smith’s claim, saying that his relationship with supervisors at the department had long been problematic and that this single incident in which Colbert referred to Smith by using the racial slur wasn’t enough to constitute a hostile work environment in the context of the other issues:

"Smith can’t win simply by proving that the word was uttered. He must also demonstrate that Colbert’s use of this word altered the conditions of his employment and created a hostile or abusive working environment. ... He introduced no evidence that Colbert’s use of the N-word changed his subjective experience of the workplace. To be sure, Smith testified that his time at the Department caused him psychological distress. But that was for reasons that predated his run-in with Colbert and had nothing to do with his race. His tenure at the Department was rocky from the outset because of his poor track record. He clashed with his supervisors over pay, and they confronted him with foul language. As early as August — the first month of his employment — he sent memoranda to the Department complaining of a ‘hostile work environment.’ On Smith’s own account, his supervisors made him miserable throughout his employment at the Department. But as we have already discussed, he has no evidence that his supervisors were lashing out at him because he was Black."

Posts online claim Amy Coney Barrett once said that "calling a Black employee the N-word does not make for a hostile work environment."

According to the opinion she wrote for a unanimous three-judge panel, Barrett said that a plaintiff being called that racial slur by a former supervisor didn’t in and of itself establish a hostile work environment for several reasons. She wrote that Smith failed to show how it changed his workplace experience, which was already fraught.

Barrett did not write that being called the racial slur doesn’t ever constitute a hostile work environment. The context of the panel’s opinion was limited to that specific case.

This claim is partially accurate, but it leaves out important details and requires context. We rate if Half True.