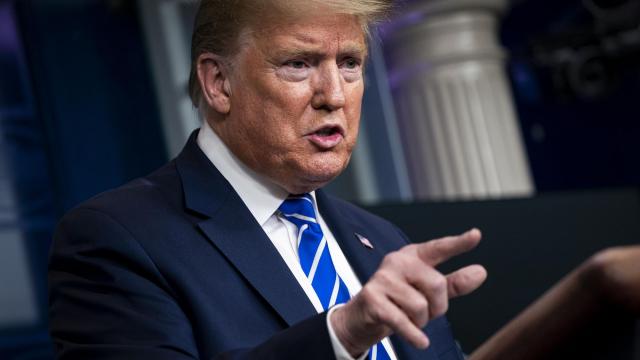 CNN — On Thursday, President Donald Trump added to his list of dubious or inaccurate coronavirus-related medical claims, dangerously suggesting at a White House briefing that ingesting disinfectant could possibly be used to treat people who have the virus.

Trump also suggested sunlight might be a treatment alternative and issued a false denial when asked why he has stopped promoting the anti-malaria drug hydroxychloroquine as a potential treatment, incorrectly saying, "I haven't at all." He referred to how "we started with a broken test" without explaining that the faulty initial test was created during his presidency, this year.

And Trump said that presumptive Democratic presidential nominee Joe Biden does not want to debate because of the coronavirus, though Biden has consistently expressed an eagerness to debate Trump even if it cannot be in person.

Sunlight and injecting disinfectants as treatments

After Bill Bryan, the acting undersecretary of science and technology for the Department of Homeland Security, explained during the briefing that new experiments show the coronavirus does not fare well under sunlight or heat, the President suggested that Americans who have the virus could treat it by going out into the sunlight on a hot day.

"There's been a rumor that -- you know, a very nice rumor -- that you go outside in the sun or you have heat and it does have an effect on other viruses," Trump said, before asking coronavirus task force coordinator Dr. Deborah Birx "to speak to the medical doctors to see if there's any way that you can apply light and heat to cure, you know, if you could."

Trump then asked Birx if she "ever heard of the heat and the light" having an impact on viruses. She responded, "Not as a treatment," before Trump asked her again to look into it.

Later, Trump again directed Birx to look into the potential for sunlight to be a cure.

"I would like you to speak to the medical doctors to see if there's any way that you can apply light and heat to cure, you know, if you could. And maybe you can, maybe you can't."

After Bryan talked about experiments in which, he said, disinfectants like bleach and isopropyl alcohol quickly killed the virus, Trump mused about whether disinfectants could be used to treat the virus in humans -- asking whether there is "a way we can do something like that, by injection inside or almost a cleaning."

Facts First: As Birx told Trump directly, and as medical experts said after the briefing, sunlight isn't a potential treatment for coronavirus. Neither are disinfectants that are used to clean non-human surfaces; Food and Drug Administration chief Dr. Stephen Hahn told CNN's Anderson Cooper later Thursday, "I certainly wouldn't recommend the internal ingestion of a disinfectant."

This bizarre exchange is the latest example of Trump grasping for a quick fix for the pandemic, after he previously suggested it might "go away" in warm weather and that anti-malaria pills could be a "game-changer."

The Reckitt Benckiser Group, which produces Lysol, flatly said on its website that "under no circumstance" should disinfectant be administered into the human body. Washington state's emergency management agency warned against eating Tide pods or injecting disinfectant, tweeting, "don't make a bad situation worse."

Immediately after the briefing, two doctors told CNN's Erin Burnett that Trump's comments did not make medical sense and warned against taking his suggestions seriously.

"Very little of what the President said as it pertains to disinfection or phototherapy makes any sense," said Dr. Jonathan Reiner, a cardiologist at The George Washington University Hospital who advised the White House during President George W. Bush's tenure. "Look, everyone wants a quick fix. And the President clearly wants a quick fix; we all do. But there are no quick fixes. We have to do this the right way; we have to do this with science."

Dr. Megan Ranney, an emergency physician who works at Rhode Island Hospital/Brown University, also batted down the President's suggestion and warned that trying it could cause sunburn, skin cancer or other dangerous consequences.

"Going out in the sun or exposing yourself to these high-intensity UV lamps is not going to protect you from Covid-19," she said on CNN. "I don't want people to think that this is another miracle cure."

Trump's statement echoes myths and rumors that got so rampant on the internet and in social media that the World Health Organization posted a myth busters pages to debunk them.

"Exposing yourself to the sun or to temperatures higher than 25C degrees DOES NOT prevent the coronavirus disease," WHO says on its website. "You can catch COVID-19, no matter how sunny or hot the weather is. Countries with hot weather have reported cases of COVID-19," it adds.

At Thursday's briefing, Trump issued a false denial when asked why he has stopped his promotion of hydroxychloroquine, an anti-malaria drug that he embraces as a potential cure for coronavirus.

"I haven't at all," the President said, before asking the reporter, "Why do you say I have?"

Facts First: Trump has significantly tamped down his rhetoric about the drug in the past week, compared with his comments in March, according to a CNN analysis.

In March and early April, the President name-dropped hydroxychloroquine almost daily, and he mentioned it dozens of times at White House briefings, according to the CNN tally. He incorrectly implied it was safe to treat Covid-19, encouraged Americans to "try it" and said it might be the biggest breakthrough in modern medicine.

"What do you have to lose?" he asked during a briefing in April.

But he hasn't mentioned the drug by name -- or touted its effectiveness -- in more than a week.

Trump stopped promoting hydroxychloroquine around the time that a series of studies came back with negative results. New research from Brazil, France and veterans' hospitals in the US indicate that the drug might not help patients with the coronavirus, and might even have deadly side effects.

For the second day in a row, the President also said he didn't see the study of US veterans' hospitals, even though he was asked about it both days and it has been covered heavily in the mainstream media.

About the research into the drug, Trump said, "We had a lot of very good results and we had some results that perhaps aren't so good." It's true that there were some studies earlier this year with promising results for Covid-19. But public health experts said that much of that research was anecdotal, and the publisher of a study that Trump repeatedly cited now says there were serious flaws with the trial.

Trump claimed that presumptive Democratic nominee Joe Biden is "a guy who doesn't want to do debates because of Covid."

Facts First: This is misleading. In late March, two weeks before Sen. Bernie Sanders dropped out of the Democratic primary, Biden said he was focused on the pandemic crisis and did not think there should be another debate against Sanders, over whom he had an overwhelming delegate lead. But Biden has never said he does not want to debate Trump in particular, because of the virus or for any other reason. Rather, Biden has consistently expressed eagerness to debate Trump even if it is not in person -- saying at a fundraiser earlier on Thursday that "I can hardly wait to debate Donald Trump. Are you kidding?"

According to a pool report from Washington Post reporter Annie Linskey, Biden then added: "Look, I'm ready to debate him. Zoom or Skype or Slack or Hangouts or in person, anytime, anywhere he wants."

Biden made a similar comment in an interview on March 31, Bloomberg News reported: "I'm ready to debate President Trump on Zoom or Skype anytime he wants."

"I can hardly wait to get him on a debate stage," Biden said on ABC's "The View" in February.

"Come on, Mr. President. I can hardly wait," he told CNN's Anderson Cooper in early March.

This story has been updated with the notion of disinfectants as a treatment and with information from the World Health Organization refuting the idea of using sunlight.