President Donald Trump defended his performance in fighting the coronavirus during an interview with Fox News’ Chris Wallace, insisting that the mortality rate from COVID-19 in the United States is among the world’s lowest.

In the interview that aired July 19, Wallace and Trump were in the middle of a discussion about the coronavirus’ impact. Wallace said that "we have the seventh-highest mortality rate in the world. Our mortality rate is higher than Brazil, it's higher than Russia and the European Union has us on a travel ban."

Neither the White House nor the Trump campaign responded to an inquiry for this article.

Scientists define "mortality rate" as a measure of how frequently death occurs within a defined population. Data on this question is imperfect because of reporting inconsistencies between and even within countries. We turned to widely cited coronavirus data compiled by Johns Hopkins University to analyze Trump’s assertion.

Specifically, we looked at the university’s calculations of COVID-19 deaths per 100,000 in population, which is a standard measurement of mortality rate. 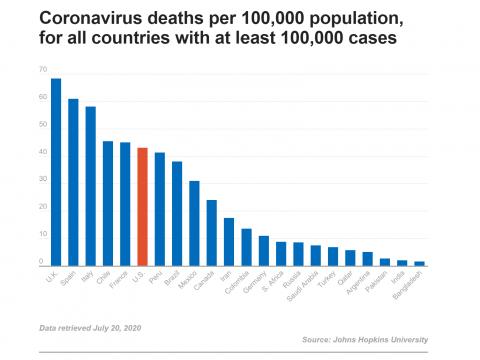 The United States has the sixth-highest mortality rate using this metric, behind the United Kingdom, Spain, Italy, Chile and France.

We also looked at how the United States compared with its peers among advanced industrialized nations.

In that comparison, six countries had higher mortality rates than the United States: Belgium, the United Kingdom, Spain, Italy, Sweden, and France.

By neither comparison is Trump close to correct.

Mortality rate is strongly related to the age distribution in a country, said Brooke Nichols, a health economist and infectious disease mathematical modeler at the Boston University School of Public Health.

"The countries with the lowest mortality rates will probably end up being the ones with the younger population age structures," she said.

Trump’s point about the U.S. is not more accurate when looking at the case-fatality rate compared with other countries. 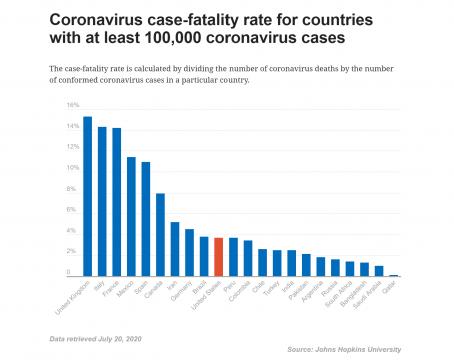 Nichols said that the younger populations of many developing countries helps explain why their case-fatality rates are lower than that of the United States. (Infected patients who are younger and, often, healthier tend to die at lower rates from the coronavirus.)

And when you compare the United States with its industrialized peers, seven countries have a lower case-fatality rate: Austria, Portugal, Norway, South Korea, Luxembourg, New Zealand and Australia.

Nichols said that the U.S ranks relatively low on this measure because, despite its problems rolling out testing, it still handles more tests per capita than most other comparable countries.

Trump said, "We have one of the lowest mortality rates in the world" from coronavirus.

The United States doesn’t have one of the world’s lowest mortality rates from the coronavirus: No fewer than 15 advanced, industrialized nations currently have a lower mortality rate, as do a host of other countries, including Brazil, Mexico, South Africa, Russia, Turkey, Argentina, and India.

Another measurement called the case-fatality rate, which Trump incorrectly referred to as the "mortality rate," doesn’t place the United States at or near the bottom internationally.

We rate the statement False.