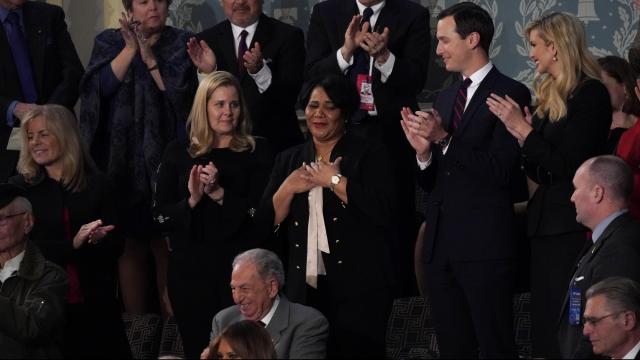 During one of his two multi-million dollar ads during the Super Bowl, President Donald Trump focused on his role in commuting the sentence of a nonviolent drug offender.

The 30-second black-and-white ad features clips of Alice Marie Johnson, a 64-year-old woman who was released from prison in June 2018. Kim Kardashian West and criminal justice activists pressured the White House to commute her life sentence.

"Alice Johnson was sentenced to serve life in prison for a nonviolent drug offence," the ad says. "Thanks to President Trump, people like Alice are getting a second chance."

The ad claims that "thousands of families are being reunited" as a result of Trump’s efforts. Like Trump’s other Super Bowl ad, which made two claims touting the economy’s success, the video ends with an image of the president holding what appears to be an executive order.

To contextualize Trump’s campaign ad, PolitiFact did some research on Johnson, Trump’s criminal justice record and the ad’s claim that "thousands" have been affected by his efforts.

In June 2018, Trump commuted Johnson’s prison sentence a week after Kim Kardashian West advocated for it at the White House.

Johnson had served 21 years of a life sentence for a first-time, nonviolent drug offence. She was convicted in 1996 on eight criminal counts related to Memphis, Tenn., cocaine distribution and money laundering scheme. She was sentenced to life in prison in 1997.

In a 2013 Mic story, Johnson said she became involved in the drug trade after losing her job at FedEx due to a gambling addiction.

"Having hit rock bottom, Johnson began to associate with people who were involved with drug dealing," the story reads. "She became wrapped up in a lucrative operation that transported cocaine to Memphis, Tennessee for distribution. In 1993, she was arrested and accused, along with 15 others, on various drug and money laundering charges."

Johnson’s case became an example for activists working to overhaul drug sentencing. It was championed by the American Civil Liberties Union and Mic. Kardashian West learned about Johnson in a video the news site published in May 2018.

The reality TV star advocated for Johnson’s release during a May 2018 meeting with Trump about prison reform. The meeting came after back-channel talks between Kardashian West and Jared Kushner, Trump’s son-in-law. Other celebrities, professors and organizations also pressured the White House to commute Johnson’s sentence.

After being released from prison, Johnson became a criminal justice activist. She was Trump’s guest at the 2019 State of the Union and published a memoir in May 2019.

In December 2018, Trump signed the First Step Act of 2018, which the Washington Post described as "the most far-reaching overhaul of the criminal justice system in a generation."

The bill passed with overwhelming support from both parties, clearing the Senate by an 87-12 margin and the House by a vote of 358-36, with the only votes against the measure in both chambers coming from Republicans.

The law trimmed down mandatory minimum sentences for certain drug offenses, retroactively reduced the sentencing disparity for crack and powder cocaine, and expanded on "good time credits" for inmates seeking to shorten their sentences by demonstrating good behavior.

Among other reforms, it also ordered the Department of Justice to create a risk and needs assessment system aimed at identifying and reducing each prisoner’s chance of recidivism.

As we’ve noted, the changes ushered in by the First Step Act built on actions former President Barack Obama had taken during his time in office.

The ad’s claim that "thousands" have been released thanks to Trump’s criminal justice reforms checks out. In July 2019, the Justice Department announced that more than 3,100 inmates had been released as a result of the First Step Act’s changes.

Was Johnson’s release tied to the First Step Act?

The ad gives the impression that Johnson was among those prisoners released because of the First Step Act’s reforms. In reality, Trump commuted Johnson's sentence in June 2018, more than six months before he signed the First Step Act into law.

A commutation is a form of executive clemency that the president has the power to grant convicted criminals. While Trump’s commutation allowed Johnson to go free, the move was short of a full pardon.

According to the Justice Department, a commutation reduces a sentence, but it does not "change the fact of conviction, imply innocence, or remove civil disabilities that apply to the convicted person as a result of the criminal conviction." Commutations also may include the remission of fees or restitution charges associated with the conviction.

In contrast, a pardon does remove civil disabilities, such as voting restrictions and the right to hold elected office. It also may make it easier to obtain licenses or employment.

The Trump administration has granted 18 pardons and six commutations, according to the Justice Department. It has received thousands of clemency petitions.