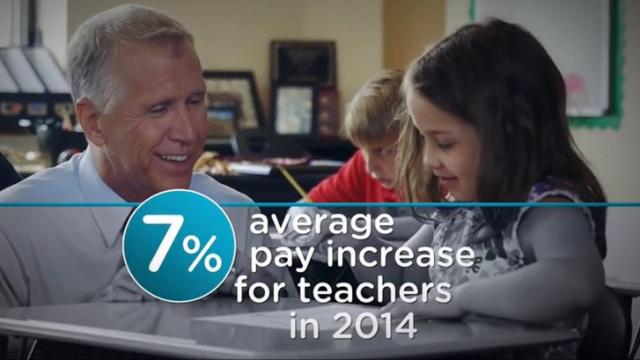 Raleigh, N.C. — Teacher pay may be a state budget issue, but it is already featuring prominently in North Carolina's U.S. Senate race, and one of the biggest claims sent us scrambling for our calculators.

While it may be simple math, the language is actually a bit tricky. In fact, without an on-screen disclaimer, Tillis would have been in contention for a red light on our fact-check scale.

"This year Gov. (Pat) McCrory and Speaker Thom Tillis fought for and won one of the largest teacher pay raises in state history," says the narrator in an ad by Carolina Rising that aired in August. The math on that claim is a little murkier, but some slick phrasing saves it from a red light.

Not so with some bolder claims that date to when Tillis and Republican legislators first unveiled the budget.

They touted what was called "the largest teacher pay raise in state history," a claim that has since been repeated by other campaigns despite being numerically dubious.

THE RAISE: Months before the 2014 legislative session began, lawmakers and McCrory pledged they would work toward a significant teacher pay raise in 2014 after going five years without a meaningful pay increase for public school employees.

Teacher pay became one of a handful of sticking points that held up a budget deal and prolonged a testy legislative session.

When lawmakers finally settled on a deal, it included a plan that both provided for raises and restructured the state's salary schedule. Two facets of that restructuring contributed to confusion over what the plan would mean for individual teachers and made boiling them down to a snappy tagline fit for a campaign commercial somewhat dicey.

Through the 2013-14 school year, teachers with at least 10 years of experience would get an annual longevity payment at on their hiring anniversary that would boost their overall compensation. The new teacher salary schedule folded that longevity pay into the overall salary.

There's something of a debate about what the impact of including the longevity money, which the state had already promised senior teachers, would be. According to both the North Carolina Association of Educators and McCrory, that 7 percent average pay raise touted by Tillis and his fellow Republican leaders becomes a 5.5 percent average raise. Some teachers got a letter stressing this 5.5 percent number the week before Labor Day.

** However, Brenda Berg, CEO of the non-partisan BEST NC, points to numbers that show it's only the cost of the pay raises that is only a 5.5 percent increase. The average teacher does get a 7 percent increase, and the average raise could be seen as closer to 9 percent if longevity wasn't backed out.

More importantly, not every teacher gets the same raise. In their proposals earlier this year, Republican leaders placed a great deal of emphasis on early-career teachers, saying that low starting salaries had become a recruitment problem.

While the new teacher pay schedule means big bumps for some teachers earlier in their career – teachers entering their fifth and sixth years get 18.51 percent raises under the new plan – late-career teachers don't do as well. Once what had been longevity pay is factored in, a teacher entering his or her 30th year of teaching will see only a 0.29 percent pay raise, far short of 7 percent.

How longevity pay affects overall raises has been a point of contention between top Republicans and the NCAE.

But it's clear when Tillis says in his commercial that lawmakers passed "a 7 percent pay raise," that's not true for all teachers. On-screen text adds an important disclaimer to the ad, clarifying that it is "an average pay increase." While the average teacher will see a 7 percent pay increase, most teachers will be above or below that mark.

The chart outlining these changes deal with teachers who have bachelors degrees, although those with certain masters degrees and national board certifications benefit as well. The NCAE breaks out how the new budget deals with those individuals. And this does not count funding by local school districts, some of which supplement the base pay provided by the state.

RAISE HISTORY: As they rolled out this plan, Republicans declared it to be the "largest teacher pay raise in state history," a claim that a salary history compiled by the General Assembly's non-partisan fiscal staff calls into question.

On at least three occasions – 1974, 1981 and 2006 – lawmakers granted teachers an average salary increase of 7.5 percent or more. The claim is on shakier ground when longevity pay is pulled out of the raise total. While a 5.5 percent raise would still be good compared with years such as 2010, 2011 and 2012, when there were no teacher raises, it's decidedly middle-of-the-pack compared with the raises given throughout the 1970s, 1980s and 1990s.

RAW DOLLARS: Since the raise is not the "largest in state history" in percentage terms, and even the "one of the largest" claim looks rickety, we asked those making the assertion how they backed it up.

"The largest previous appropriation we have record of for teacher pay raises prior to this budget was in 2006-07," wrote Amy Auth, a spokeswoman for Senate President Pro Tem Phil Berger. "The amount that year was around $242 million, and our salary increase of $282 million exceeds that amount."

Putting aside the oddity of framing a raise in terms of the money needed to fund it rather than what it means to the people on the receiving end, this argument uses nominal dollars – figures that don't adjust for inflation – and is the same approach used by Carolina Rising to justify its ad. It is problematic for two big reasons.

First, the number of teachers and the state's education budget tends to grow over time. The numbers bounce around because the number of students changes and tough budget times have forced school districts to keep a tight rein on personnel costs. But as an example, according to state Department of Public Instruction figures, the number of full-time teachers in North Carolina has grown from a 10-year-low in the 2004-05 school year to a high of 99,098 full-time teachers in 2008-09. In the 2013-14 school year, the latest for which data is available, DPI reported there were 95,116 teachers.

That means any raise will likely be spread over more people, whose salary costs also have been growing – albeit much more slowly than in normal economic times. As an aside, school districts have warned that the number of teachers has not kept pace with the number of students.

The use of nominal dollars presents an even bigger problem.

When comparing costs over time, particularly when you talk about salary data, economists say that using nominal dollars is mathematically unsound. That's because a dollar today is not worth what a dollar was worth even a few years ago.

"It just doesn't mean much for the teachers who are getting those raises," Sinclair said. "What teachers care about is what they'll actually be able to buy."

According to the Bureau of Labor Statistics inflation calculator, in order to have the same impact as the 2006 $242 million raise, lawmakers would have needed to spend $285 million in today's dollars. In fact, there are several raises over the past 20 years that, adjusted for inflation, are bigger that the $282 million offered by lawmakers this year.

Although it would be fodder for another article, Sinclair pointed out that because North Carolina teachers had only one small raise in the past four years, this year's raise mainly helped make up for economic ground teachers lost due to inflation over that period.

THE CALL – A 7 PERCENT RAISE: A claim like Tillis' that teachers got a 7 percent raise is correct, but only if you say that it is an average raise. Some teachers got more; many received less. This may sound like a technical point until you consider the person on the receiving end of a less-than-1 percent raise. Dropping the "average" is misleading, and Tillis' ad is saved from a red light only because it has an on-screen disclaimer. As it is, the claim could be confusing to viewers as presented, and we give it a yellow light on our fact-checking scale.

We're giving North Carolina Rising a separate yellow light for its ad. Since the group doesn't really define what it means by "one of the largest" teacher pay raises in state history, we won't put out the red light. Clearly, teachers on average are getting raises. But both the state's history of teacher pay raises and the fuzzy math that ignores inflation tells us to take this claim with a grain of salt.

THE CALL – LARGEST TEACHER RAISE: The news releases that said this budget had "the largest teacher pay raise in state history," and any political advertising that parrots this line, is stretching the numbers to the breaking point. Using raw dollars is an unusual and, according to economists, mathematically unsound way to measure the potency of a particular raise. This claim completely falls apart based on inflation-adjusted numbers. It gets a red light.

** This post was edited from the original to include Brenda Berg's input.