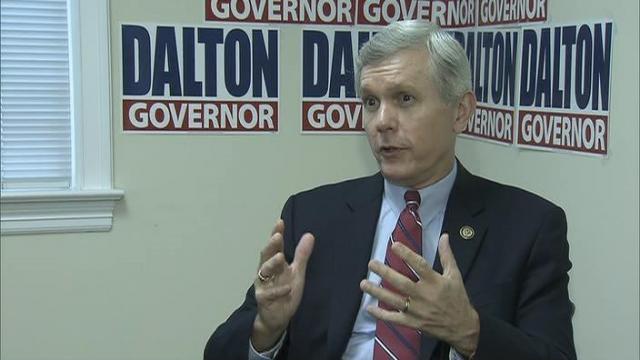 The Republican Governor's Association has launched a television ad attacking Lt. Gov. Walter Dalton's economic record. In the ad, the Republican group closely links Dalton, the Democratic candidate for governor, to Gov. Bev Perdue, an incumbent who decided not to seek re-election.

Political analysts expect spending by national groups such as the RGA to be an important factor in this year's gubernatorial election.

"We don’t detail the exact size and scope of our ad buys, but I can tell you it is a major, multi-week buy in three of the major media markets that are critical to the North Carolina governor’s race," RGA Spokesman Mike Schrimpf said in an email.

According to public records, the RGA spent $56,200 on 38 ads between May 15 and May 20 on WRAL-TV alone. Schrimpf confirmed estimates that the total size of the buy across the state is at least $850,000. That short-term ad buy would have used about a third of the total cash on hand Republican candidate Pat McCrory reported having on hand at the end for the first quarter.

Given that the state's seasonally adjusted unemployment rate was 9.7 percent in March, we saw four items to fact check here:

Gov. Bev Perdue has been promoting a three-quarter-cent sales tax increase and Dalton has endorsed that proposal. Perdue has specifically pushed for the extra revenue (about $760 million next year according to her budget proposal) to go toward education.

So in large part, this boils down to a numbers question: Does a three-quarter-cent sales tax increase amount to 15 percent?

The statewide sales tax rate is 4.75 percent. And yes, raising that rate by .75 percentage points(from 4.75 to 5.5 percent) would represent at 15.7 percent increase in sales tax.

But for items where the full sales tax rate applies (items like groceries are taxed differently), nobody pays just the state's 4.75 percent levy. That's because local governments also charge sales tax. In most of the state, consumers will pay 6.75 percent at the register. (That total is 7 percent in 23 counties and 7.25 in Mecklenburg County).

So a three-quarter-cent sales tax increase over the total rate you pay at the register is roughly 11 percent.

Is this claim true? Yes, as far as it goes, although those who look closely at their cash register receipts might have thought the percentage was off.

The on-screen citation for this claim reads the "UNC Center for Competitive Economies."

The center does research for the General Assembly on occasion and this claim is based on an April 2011 report on a variety of tax matters.

What's immediately obvious from reading the report is that the center was looking at allowing a 1-penny sales tax to expire on July 1, 2011. (That is in fact what happened.) The analysis predicted that 11,720 private sector jobs with an average salary of $34,200 per year would be created in various ways as a result of letting the 1 penny sales tax expire.

But there are caveats in the report. "No assumptions are made about the public sector impacts of having reduced tax revenues, which may limit the net effects of the benefits outlined here," the report says. So while the state may gain or keep private sector jobs, it doesn't address what job losses in the public sector – teachers or other government workers – might be or whether there would be other consequences.

Given those doubts, WRAL-TV asked the study's authors, Brent Lane and Jason Jolley, to take a look at the commercial and see if the claim it made was backed up by their research. Lane, the center's director, says their work is geared toward informing policy analysis rather than political back-and-forth.

"(The ad) would seem to imply we did a study about what would happen if you raise the sales tax. That would be inaccurate,” Lane said.

He added that if his center were asked about the affect of raising the sales tax this year, economists would look at different factors since conditions have changed since a year ago.

"It's a different economy now," he said.

So was the RGA's conclusion about the 8,000 jobs right or wrong?

"That is decent layman's logic. It would be very lazy economic analysis," Lane said. He added that he was not arguing the with the political points in the commercial.

Is this claim true? While it's not completely unfounded, data from UNC doesn't support the claims a squarely as the commercial suggests. As with a lot of political advertising, it ignores cautions, caveats and nuance found in academic studies.

How did the RGA arrive at the conclusion that "40,000 more North Carolinians are out of work" thanks to Dalton's policies?

Dalton and Perdue took office in January of 2009. At that time, seasonally adjusted unemployment figures said 410,784 people were out of work while there were 4,174,597 people in the workforce. Preliminary numbers for March show that there are now 451,657 people unemployed, which would be an increase of 40,873 additional people unemployed. But over the same time period, the number of employed people grew to 4,228,180, an increase of 53,583 people working.

So is the RGA right or wrong here? The answer, may turn out to be neither.

He looks at different measures of employment and unemployment than the numbers cited by the the RGA. Non-farm unemployment, he said, bottomed out in early 2010 and since then has been growing.

By the time Dalton and Perdue took office in 2008, the state had been in recession for at least a year, sparked in large part by problems in the housing market.

Walden points out that there is little that governors – or presidents – can do to influence short-term economic figures.

"What governors and legislators do have some influence over is the longer-term, structural trends in the economy," Walden said.

Walden didn't directly address the RGA's claim, but given his guidance it would be hard to give Dalton too much credit or blame for the fluctuations in the economy over the past four years. The RGA certainly does not draw the line between a specific policy move and a given number of job losses.

Is this claim true? The numbers are based on Bureau of Labor Statistics figures and are accurate as far as they go. However, as Walden points out, merely the fact Dalton was in office at the time does not mean he had a great deal of influence over the unemployment rate.

Certainly the offices of "governor" and "lieutenant governor" seem related. However, it's important to note that they are elected separately in North Carolina, unlike other states where the two may run as a team.

"On its face, it's not obviously plausible," said Mike Munger, who teaches in both the economics and political science departments at Duke University. He was also a Libertarian candidate for governor in 2008 when Perdue was elected.

Munger said the ad would clearly be off-base if the RGA had tried to call Dalton "President Obama's right-hand man," merely because the two were Democrats.

But Perdue and Dalton have something of a working relationship, given that the lieutenant governor receives "duties as the General Assembly or the Governor may assign to him." They both serve on the Council of State. And as their positions on sales tax policy show, they often agree on key issues.

"It's well within bounds for political rhetoric in an attack ad," Munger said.

The "right-hand man" claim aligns neatly with the North Carolina Republican Party's effort to label Dalton "Bev Perdue 2." Both approaches suggest that if you are unhappy with Perdue, you should be unhappy with Dalton.

In response to a request for comment on the RGA topic, Dalton's campaign issued a news release that didn't address the claim head-on and makes no mention of Perdue. Rather, it called the ad a "smear" and proceeded to attack Republican gubernatorial nominee Pat McCrory by linking him to the Republican policies in the General Assembly.

However, when asked about his connections with Perdue earlier in the year, Dalton has done his best to make clear he is his own person.

"I am Walter Dalton. I'm not Beverly Perdue. We were elected separately," Dalton said in an interview the day after winning the Democratic primary. "People can make comparisons one way or the other. I hope they will look at my record."

In the same interview Dalton said that his differences with Perdue would be more stylistic – he said his personal relationships would allow him to work more effectively with the General Assembly – than substantive.

Is this claim true? Perdue and Dalton haven't exactly been buddies, but they are in the same party and generally promote similar policies. The "right-hand man" claim is a bit of political hyperbole. Certainly Dalton hasn't been a lead operative for the governor. But in the context of a negative ad, the claim doesn't seem completely egregious.