Fact Check: Have 13 GOP-backed laws been struck down? 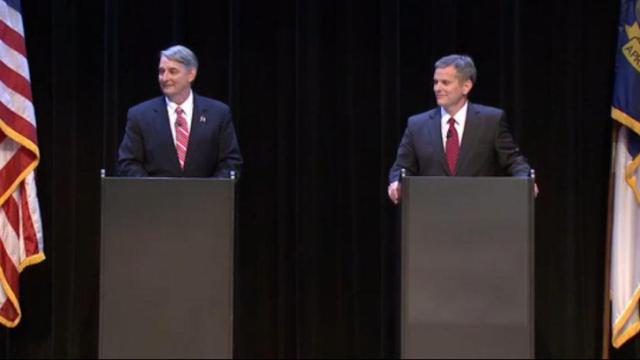 Raleigh, N.C. — Sen. Buck Newton, R-Wilson, and former Sen. Josh Stein, D-Wake, are competing to be North Carolina's next attorney general and met for a recent debate hosted by UNC-TV and and the Institute for Political Leadership.

Throughout the event, Stein and Newton debated the legacy of current Attorney General Roy Cooper, a Democrat who is challenging Republican Gov. Pat McCrory in the general election.

The two attorney general candidates highlighted their own experience and contrasted their records during the debate. Among the contrasts they drew had to do with how they voted during their service in the North Carolina state Senate.

Stein was elected four times to the state Senate before resigning this spring. Newton is finishing his third term. The pair frequently found themselves on the opposite sides of high-profile bills.

The entire debate is worth watching, but a couple of lines caught our attention here on the fact-checking desk.

One of the major flashpoints between Newton and Stein has been the defense of state laws. Cooper has, on occasion, declined to defend measures challenged in federal or state court. For example, after a federal appeals court struck down North Carolina's voter ID measure, Cooper declined to appeal the case further.

Newton has been critical of that stance, saying Cooper should do more to defend even politically controversial statutes.

"Quite simply, the vast majority of the time, there is no reason for the attorney general not to be actively involved in the defending of the laws of our state," Newton said. "For me, it's a simple question: Was the law passed in a constitutional manner?"

"Sen. Newton has voted for 13 separate bills that have been held to be unconstitutional by federal courts," he said.

THE QUESTION: Despite North Carolina finding itself in court an awful lot, 13 sounded like an overestimate based on the number of lawsuits we've been tracking. Did the legislature pass, and Newton vote for, 13 bills held to be unconstitutional by one court or another?

SUMMARY JUDGMENT: Republican lawmakers took control of the General Assembly in 2011 and have often faced a skeptical judiciary over the past six years. Because Stein is talking about the number of bills passed, not the number of suits filed, he is on target.

BEYOND THE NUMBERS: While Stein is correct on the number of court losses for the state, it bears pointing out that there is a qualitative, rather than just a quantitative, argument for voters to sift through. The question for those going to the polls may be less about whether the candidates can count wins and losses, but how they would approach the defense of North Carolina statutes.

Stein argued during the debate that lawmakers should take more advice from the attorney general on the front end of the legislative process. When there is a lawsuit, such as the battle over voter ID and other election laws, he said continuing the defense in the face of adverse rulings can become a waste of taxpayer money.

"The General Assembly represents the people of North Carolina," he said. "That's our constitutional system. Their voice, the people's voice, deserves to be represented and deserves to be defended all the way to the bitter end. It is not appropriate for the attorney general to wave the white flag in the middle of a case."

COUNTING UP THE CASES: Now for the numbers. Stein is pointing to 13 bills, all of which Newton backed and all of which have been invalidated by one court or another. While your fact-checker was skeptical the count would reach 13, it does. Here's the list:

THE CALL: Newton and Stein offer voters different visions for how to handle the office of attorney general and how to defend the state in court. Those differences aside, Stein is right about the number of state laws Newton has backed that have been voted down. If one was inclined to quibble, you could argue that Stein runs up the score by separating out each individual redistricting bill, but he's not wrong to do so. This gets a green light on our fact-checking scale.