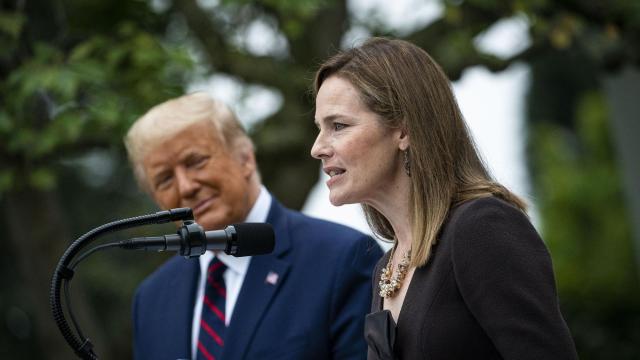 A few days before Judge Amy Coney Barrett met with President Trump at the White House, posts on Facebook mischaracterized her religious convictions and claimed she has made racist and homophobic statements.

Barrett, a Catholic conservative judge on the Seventh Circuit Court of Appeal in Chicago, is on the shortlist of names that Trump could nominate for the Supreme Court. The seat opened when Justice Ruth Bader Ginsburg died on Sept. 18.

Some claims on Facebook offered false takes on her record.

"Amy Barret said gays have a right to be discriminated against because they are against Gods wishes and won't be allowed. Heaven," one Facebook user wrote, misspelling her last name and omitting punctuation.

"Amy Barret says white people are Gods chosen ones. Minorities must submit to them and that's Gods plan. Obedience," reads another post from the same user.

To be clear: Barrett never said either of these things.

These Facebook posts were flagged as part of Facebook’s efforts to combat false news and misinformation on its News Feed.

A review of her judicial opinions, public statements and academic writing hasn’t produced any quotes along these lines. Barrett clerked for late Justice Antonin Scalia before joining the faculty of Notre Dame Law School, where she taught for 15 years. Trump nominated her to the appellate court in 2017.

Barrett has a limited judicial record compared with other Supreme Court nominees that Trump is reportedly considering. Timothy R. Johnson, a professor of political science and law at the University of Minnesota, told PolitiFact that Barrett’s relatively sparse paper trail makes it difficult to predict how she’ll rule if nominated and confirmed to the Supreme Court.

Barrett has described herself as a devout Catholic. A liberal group on Instagram warning against her potential nomination pointed out her involvement in a Christian group called People of Praise. The New York Times reported that the group supports gender roles where husbands have authority over their wives.

Democratic senators have pointed to an article she co-wrote early in her career as reason for concern that she would not work with impartiality. The article argued that Catholic judges should have the right to recuse themselves from cases that conflict with their personal beliefs, such as those involving the death penalty.

During her confirmation hearing for the appeals court, Barrett pushed back, saying that she "would never impose my own personal convictions upon the law."

Barrett’s supporters have said the controversy over her religious beliefs is a form of anti-Catholic bias, pointing out that other members of the court are Catholics.

Barrett never said that "gays have a right to be discriminated against."

But LGBTQ rights and abortion rights organizations have criticized her past appointment. In 2017, the Lambda Legal Defense and Education Fund, a civil rights organization that focuses on LGBTQ communities, penned an open letter to U.S. senators opposing Barrett’s appointment to the Seventh Circuit Court of Appeals.

Lambda Legal took issue with a letter that Barrett had signed that defined marriage as the "indissoluble commitment between a man and a woman," and a talk that she gave at the Alliance Defending Freedom, a legal organization that opposes LGBTQ rights.

Supporters of abortion rights are concerned about Barrett’s abortion views.

In a 2013 interview, Barrett said that she believes that life begins at conception. In an article, she wrote that the Catholic Church’s views on prohibiting abortion are "absolute" because they "take away innocent life." She has ruled against abortion rights in the two abortion cases that she has heard on the bench.

Finally, the post claims Barrett has white supremacist views. We found no evidence of that in a review of Barret’s record.

Facebook posts claim that Barrett said that "gays have a right to be discriminated against because they are against Gods wishes" and that "white people are Gods chosen ones."

Barrett has never said anything along these lines.

We rate these posts False. ​