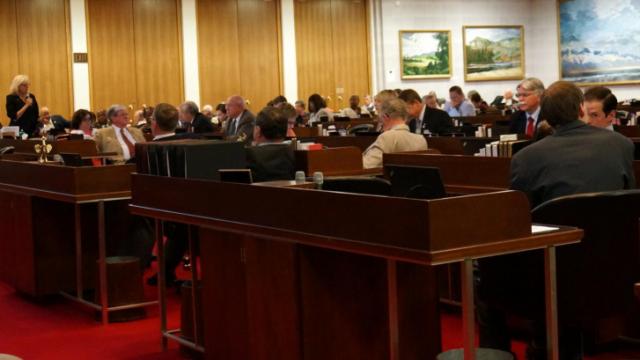 Raleigh, N.C. — During last week's debate over a bill that would modify the state's rules on "fracking" – on-shore natural gas exploration and drilling, if you prefer – opponents of the new proposal accused the bill's backers, mainly Republicans, of going back on a promise made in 2012.

In particular, they said that lawmakers had pledged in 2012 to lift the fracking moratorium only after rules for drilling were in place. The 2014 bill, which is on its way to the governor, essentially lifts the moratorium 60 days after the rules are made final, barring some legislative action. The measure is a departure from the normal rules-review process.

"This bill, as presented, breaks the promise that was made in 2012 to fully develop rules governing the practice of fracking," Sen. Mike Woodard, D-Durham, said during the Senate debate.

Rep. Becky Carney, D-Mecklenburg, made a statement, saying that the Republican-led majority was taking away an important safeguard.

"One thing about what we promised was that we would keep a moratorium in place until the mining commission went through and developed all of their rules and brought them back in October 2014 – and its only May of 2014 – and then, at that point, the legislature would look at those rules and vote on them," Carney said. "We are not honoring that commitment."

Both Carney and Woodard are referring to a piece of the 2012 law that would have required the General Assembly to affirmatively vote to allow fracking to go forward. In the 2014 version of the bill, lawmakers must vote if they want to stop some part of the fracking framework from going into place.

The Question: Does the 2014 fracking bill break a promise, or should Carney and Woodard get a pair of blinking red lights?

Into the Wayback Machine: All the way back in 2012, the measure at issue was Senate Bill 820, known by its short title as the "Clean Energy and Economic Security Act." Most legislation gets a much longer, less snappy title, for purposes of legislative debate. Among the lines in Senate Bill 820's 100-word title was the phrase, "AUTHORIZE HORIZONTAL DRILLING AND HYDRAULIC FRACTURING, BUT PROHIBIT THE ISSUANCE OF PERMITS FOR THESE ACTIVITIES PENDING SUBSEQUENT LEGISLATIVE ACTION."

During floor debates in both the House and Senate at that time, proponents of the bill played up the second half of that sentence.

"What this means is, there will be no permitting of any well drilling at all until the General Assembly has had a chance to review, completely, this comprehensive list of regulations and rules that will govern the safe administration of shale gas exploration and development," Sen. Bob Rucho, R-Mecklenburg, said during Senate floor debate in 2012.

In the state House, similar assurances were made.

The bill, Rep. Jamie Boles, R-Moore, said in 2012, would not permit drilling but rather provided for a study.

"We will have the last say and the final vote on this after the study is done," Boles said on the House floor.

Rep. Mike Stone, R-Lee, who was one of the most vocal proponents of the 2014 legislation last week, also gave assurances in 2012 that lawmakers would have the final say.

All three of those men referred to work being done by the state Mining and Energy Commission to put rules in place and study the issue of fracking. Those rules were originally due this October. The commission would be given until the end of this year to complete its work under the 2014 bill. In either case, under the language in the latest bill, those rules could go into place without further legislative action.

Back to the future: The bill now headed to McCrory would allow for the rules to return to the General Assembly, but it puts a much higher burden on drilling opponents.

Instead of the entire General Assembly being required to pass a law lifting the state's fracking moratorium, an opponent of the rules would have to file and push through a bill to block those rules from going into effect.

During a taping of "On the Record," Rep. Pricey Harrison, D-Guilford, who opposed lifting the moratorium, said the recent debate showed how hard it would be for lawmakers to get a vote on a bill to knock down the rules in 2015.

"I don't anticipate the legislature being able to stop this once the rules get put in place," Harrison said.

In essence, the final chance to vote on fracking that was foretold – even promised – in 2012, is far from guaranteed. No piece of legislation, especially one out of vogue with the legislative majority, is required to be heard.

During floor debate last week, Stone said that, if he had it to do over again, he would have pushed for language originally that lifted the moratorium at some date certain. That, he said, would have put pressure on drilling opponents to come up with constructive criticism rather than just efforts to block fracking.

"The rules we will have will be ongoing and changing for a decade," Stone said last week.

Asked if the legislature was breaking a promise, Rep. Paul "Skip" Stam, R-Wake, the speaker pro tem of the House, said he didn't think so.

"I wasn't going to move forward with it (fracking) until Jamie Boles and Mike Stone were satisfied," Stam said.

Boles and Stone are from the area of North Carolina that is the most likely location for drilling.

Stam said that, when those two lawmakers were satisfied, so was he.

"That's why we have representative democracy, and a majority of the House was ready to go," he said.

The call: To make a call here, we're not weighing in on the virtues of gas drilling, whether the bill is a good one or the state is pursuing a sound policy. The only thing we're weighing in on is whether the General Assembly promised to do one thing and then did another.

That appears to be the case. While you can make the case that lawmakers could bring up a rule disapproval bill in 2015, there's no guarantee that measure will be heard. That's a far cry from the requirement that lawmakers affirmatively act to lift the fracking ban.

Carney and Woodard are safe from our red light. Instead, we'll award a U-Turn on our fact checking scale to the entire legislature, or at least those who voted both for the 2012 and 2014 fracking bills. A U-turn rating does not dispute the veracity or soundness of a claim but rather that a statement or action "represents a change in position for the individual in question" – a "flip-flop" if you will.