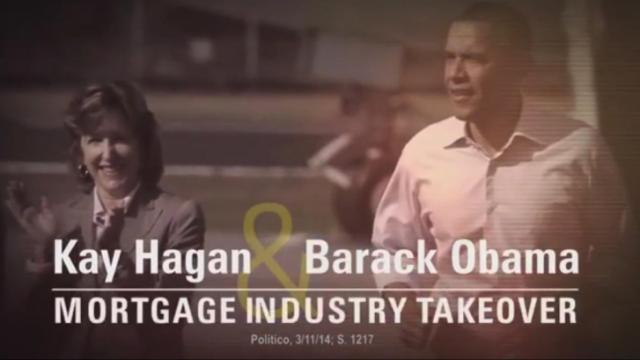 Raleigh, N.C. — A new television ad targeting U.S. Sen. Kay Hagan combines the go-to bogeyman for conservative causes this year – the Affordable Care Act – with a scary-seeming claim about retirement savings into a 30-second melange airing in Raleigh and throughout the state this month.

"First it was Obamacare," begins the female narrator for the 60 Plus Association's new ad. "Now, Kay Hagan is teaming up with Barack Obama to take over the mortgage industry."

The ad is critical of Hagan's support for a Senate-developed plan to wind down Fannie Mae and Freddie Mac, two federally backed mortgage giants taxpayers bailed out in 2008.

The Question: Should "average" investors who see this ad on television at home be worried that their 401(k) or pension fund investments will lose value as a result of the Hagan-backed bill or similar bills?

Who: The 60 Plus Association was founded in 1992 and bills itself as "a non-partisan seniors advocacy group with a free enterprise, less government, less taxes approach to seniors issues. 60 Plus has set ending the federal estate tax and saving Social Security for the young as its top priorities. 60 Plus is often viewed as the conservative alternative to the American Association of Retired Persons."

The group is a 501(c)(4), which means it does not have to reveal its donors. However, it has been tied to the conservative political spending network bankrolled by billionaires David and Charles Koch and their allies.

Worth noting: Hagan, a Democrat, faces re-election this year, and this ad certainly won't help her. However, unlike some other efforts by Koch-funded groups such as Americans for Prosperity, 60 Plus is airing similar ads against Republicans and Democrats, including Sen. Mike Crapo, the Idaho Republican who is a ranking member on the Senate Banking Committee.

60 Plus is spending $1.5 million to air this and similar radio and television spots targeting seven senators, according to a spokesman for the group, who added that a "substantial portion" of that spending would be in North Carolina, where it will air in all major media markets.

The Backup: "Millions of retirees and others will lose their savings from this broad government overreach built into the Johnson-Crapo legislation. We're asking these Senators to not bring Obamacare to the mortgage industry and to allow Fannie and Freddie shareholders to recoup the investments that are lawfully theirs," said Jim Martin, chairman of 60 Plus, in a news release announcing the ad campaign.

Hagan is not a co-sponsor of Johnson-Crapo, named for its sponsors, but has signed on to a similar bill.

A spokesman for 60 Plus provided links to news stories cited by the ad and talked on background about the spot's thesis. However, before digging into the backup, it would be helpful to know that Fannie Mae and Freddie Mac do not make mortgage loans themselves. Rather, they buy mortgages issued by banks and bundle them into securities that are then sold to investors. In late 2007, when thousands of homeowners defaulted on their mortgages, both companies ran into huge financial losses, and the federal government spent $188 billion bailing out the two institutions.

Both companies have since turned around and more than repaid what the government invested in the bailout. However, lawmakers on both sides of the aisle have been keen to revamp how the government is involved in the mortgage industry. At the same time, the government has continued to reap profits from the two companies rather than letting those funds pass on to shareholders.

Hagan generally supports an approach that would create a new system to replace Fannie Mae and Freddie Mac. The plan is backed by the White House, according to Politico.

"Private investors that still own 20 percent of Fannie and Freddie have filed a federal lawsuit opposing the current payment system," according to a a CNN report cited by the ad.

The fate of those investors would be left up to the courts, under the Senate Banking Committee's plans, according to Bloomberg News report.

But do those investors represent "ordinary investors?"

More Context: To help us sort through this ad, your fact checker turned to experts who write about and lecture on mortgage-backed securities for a living.

Anthony Sanders, a distinguished professor of real estate finance at George Mason University, said investors stand to lose under the wind-down bills. But it's important to know who those investors are.

Shares in Fannie Mae and Freddie Mac lost much of their value in late 2007 and 2008, Sanders said. In September 2008, the pair were put into a conservatorship. Essentially, they are being run under the supervision of the Federal Housing Finance Agency. By that point, shareholders had already lost much of the value that ware invested in the two companies.

"They bought the pain in the fourth quarter of 2007 along with the rest of us. That's when housing prices collapsed," he said.

After 2008, hedge funds and other speculators came onto the scene, Sanders said. Those players have scooped up both common stock in the two companies as well as "junior preferred stock," essentially placing a bet that the companies would rebound under federal protection.

"We don't have a lot of good information in terms of who holds the junior preferred stock," said Mark Calabria, director of financial regulation studies at the Libertarian Cato Institute.

Calabria is critical of the Senate bill because it puts taxpayers at risk, but he said it's a stretch to say that middle-income pensioners are placed at risk by the measure. While we can't say for sure who owns Fannie and Freddie stock, he said, the people who stand to lose the most are likely big investors who essentially bet that the foundering companies would recover with taxpayer assistance.

Experts writing on the wind-down bill point out that the federal government has more than been repaid for its investment, and there is an argument to be made that it's unfair to stiff private shareholders if the two companies – which are still in federal conservatorship – are profitable once again.

But this commercial doesn't raise the question of what's fair for big shareholders. It uses pictures of an elderly couple sitting at a table and blue-collar workers to raise the specter of retirement funds being raided and confiscated by the feds. The question is whether what happens to shareholders will materially impact the retirement account for "average investors."

The experts say that's not the case.

"I see three different classes of investors' interest being conflated in the ad," said Roberto Quercia, director of the University of North Carolina Center for Community Capital.

Small, rank-and-file investors lost most of their value in the company during the housing market crash. The ad, he said, is conflating those pre-2008 shareholders and the holders of mortgage-backed debt with people who invested after 2008, speculating that the companies might be worth something again.

It is possible that some pension funds and 401k plans have, in turn, make investments in hedge funds that bought Fannie and Freddie stock after 2008.

"But we're talking about tens of billions of dollars worth of par value which has been lost and written off," Calabria said. "We have a multi-trillion-dollar pension system."

The impact of potential losses to individual small investors who are likely to see these commercials at home, he said, is small.

"There is certainly some fear-mongering" in the commercial, he said.

Sanders agreed that average retirees who are invested in 401(k) plans and pensions have little to worry about from the Senate bill. Asked if saying "ordinary investors – teachers, police officers, firefighters – could lose retirement savings" was overstating the case, Sanders said, "absolutely."

The call: In prior fact checks, we've said it's nearly impossible to write a 30-second spot about the complex topic of health insurance reform that would get a green light on our fact-checking scale. That goes double for any ad that tries to merge health care with another hugely complex topic such as the mortgage industry inside of a half-minute spot.

More directly, this ad is clearly built to give viewers the impression that their retirement savings may be at risk as a result of this bill. Our experts say that assertion is at best an overstatement and at worst "fear mongering." This ad gets a a red light.