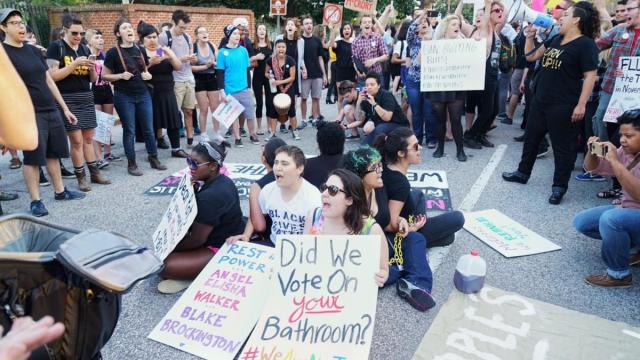 Raleigh, N.C. — The battle over North Carolina's recently passed House Bill 2 has sparked a number of claims and counter claims about the measure, which prescribes nondiscrimination guidelines for cities, counties and other government entities.

Critics of HB2 say that it threatens $4.5 billion in annual federal education funding that comes to North Carolina to support education programs at various levels.

Fact Check: McCrory's "Myths vs Facts" email on HB2
"The legislation also forces transgender students in public schools to use restrooms and other facilities inconsistent with their gender identity, putting $4.5 billion dollars in federal funding under Title IX at risk," a letter from business leaders presented to the governor Thursday reads. Other news releases from organizations such as the ACLU have repeated that claim, stating "The law also violates Title IX by discriminating against students and school employees on the basis of sex."

The claim found its way onto the floor of the state legislature, local news reports – including our own – and national news reports about the measure.

SUMMARY JUDGMENT: This claim is overstated. It is uncertain that courts will hold that Title IX applies to gender identity. Local school officials say they have not identified any immediate impact.

BACKGROUND: For those who haven't been following the issue, House Bill 2 is the measure passed earlier this month in reaction to Charlotte's transgender nondiscrimination ordinance. While there are many points of contention over what the law does and does not do, we are concerned with the provision that specifies, "public agencies shall require every multiple occupancy bathroom or changing facility to be designated for and only used by persons based on their biological sex." In North Carolina, public agencies include the state's university system, community college system and K-12 public schools. "Biological sex" is defined as how an individual is listed on their birth certificate.

The newly passed law prevents a student who, for example, was born a male but currently looks like, dresses like and acts like a girl or woman from using the girl's locker room or bathroom. However, the newly drafted state law does not prohibit school districts from offering separate changing and toilet facilities for transgender students.

Title IX is a federal law, passed by Congress in 1972, that prohibits educational institutions receiving federal funding for treating people differently based on sex. "Some key issue areas in which recipients have Title IX obligations are: recruitment, admissions, and counseling; financial assistance; athletics; sex-based harassment; treatment of pregnant and parenting students; discipline; single-sex education; and employment," according to the U.S. Department of Education. Many people are familiar with Title IX due to its requirement that universities offer the same number of competitive athletic opportunities for men and women.

The question of whether Title IX speaks to how schools should handle transgender students is the subject of a federal lawsuit in Virginia. That case, G.G. vs Gloucester County School Board, was recently heard in oral arguments by the Fourth Circuit Court of Appeals. It involves Gavin Grimm, a transgender teen who sued when his local school district passed a policy that prevented him from using the boys room.

As has been the case in North Carolina, that Virginia case pitted the interest of transgender individuals in being treated equitably versus the concerns of parents and public officials who worried that the policy could open the door to predators or be upsetting to other students.

In their defense of House Bill 2, McCrory and other backers have pointed out that the federal district court ruled in favor of the school district. It's worth pointing out, as our friends at Politifact did in their fact check of McCrory's statement, that the ACLU took issue with comments made by the octogenarian Reagan-era appointee, which indicated he may not have understood the science or social issues at hand.

The federal government has filed a brief in support of Grimm and the U.S. Department of Education has issued guidance that says Title IX does apply to gender identity. "Title IX’s sex discrimination prohibition extends to claims of discrimination based on gender identity or failure to conform to stereotypical notions of masculinity or femininity and OCR accepts such complaints for investigation. Similarly, the actual or perceived sexual orientation or gender identity of the parties does not change a school’s obligations," according to guidance from the department.

It is widely expected that the eventual outcome of G.G. vs Gloucester County will determine whether that interpretation can stand.

IN NORTH CAROLINA: Education officials in North Carolina are still assessing what, if any, impact HB 2 will have.

Vanessa Jeter, a spokeswoman for the Department of Public Instruction, said her agency isn't involved in a review of the policy and as of yet has not received notice from the federal government that any problems were imminent. Similarly, Wake County Public Schools officials say they are still reviewing what, if any, impact HB 2 will have on their system, including their ability to draw down federal funding.

"The Title IX issue is complicated and we’re reviewing it," said Bruce Mildwurf, a lobbyist with the N.C. School Boards Association, adding his group hasn't issued any guidance to school districts.

Higher education leaders are also stepping carefully with regards to the matter.

"This legislation has raised many questions for our campus community for which we’re seeking answers," UNC-Chapel Hill Chancellor Carol Folt wrote to faculty and staff this week.

ARGUMENTS: Perhaps the strongest evidence that school funding could be at risk are instances from other states such as Illinois and California, where the federal government threatened action based on Title IX and the treatment of transgender individuals. In both those cases the schools settled before the case went to court.

In South Dakota, Gov. Dennis Daugaard vetoed a bill that would have restricted the bathrooms transgender students could use, specifically citing the possible threat of losing funding as a result of Title IX enforcement.

That said, when Title IX was written in 1972, it did not specifically deal with transgender issues, so it's unclear if courts will ultimately hold it applies. The Virginia case will be the first major test in court.

"We are not sure at all because there has been no definitive court ruling on this," said Jane Wettach, a professor with Duke University Law School specializing in education issues. "The administration is charged with interpreting the law, and it's currently interpreting the law in this way. But the district court judge in the Virginia rejected the Justice Department's and Department of Education's view."

Opponents of House Bill 2 note that a single judge in Virginia does not set precedent for North Carolina.

Wettach pointed out that once President Barack Obama leaves office next year, a different administration could reverse the department's interpretation. That seems likely under a Republican president, given that the RNC has taken a position opposed the the Department of Education's interpretation, saying the administration has overstepped its authority.

"Neither the Department of Justice nor Department of Education really take away money very quickly or very often," Wettach said. "The money is certainly not immediately at risk."

However, she said, if the Fourth Circuit case is eventually decided in the student's favor, or a Democratic administration replaces Obama's, North Carolina could be facing pressure to change the policies set forth under House Bill 2. 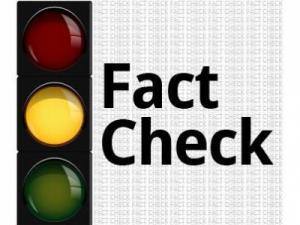 THE CALL: When we examined McCrory's claims in defense of the law, your fact checkers pointed out he was trying "to confer a degree of certainty about the law that doesn't appear to exist." We have the same problem here, although not to the same degree.

The idea that HB2 posses a certain or immediate threat to funding is specious. Any move to withdraw funding from the state would be part of what is typically a lengthy process and could be derailed by what the Fourth Circuit, or eventually the Supreme Court, says with regard to Title IX policy.

However, there is certainly room to make the argument that HB2 eventually could have an impact on federal funding. The Obama administration's actions with regard to Title IX and transgender policy in other states save the claims related to HB2 and Title IX from running a red, but they do get a yellow light on our fact checking scale.