Fact Check: Does Hagan vote with Obama 95 percent of time? 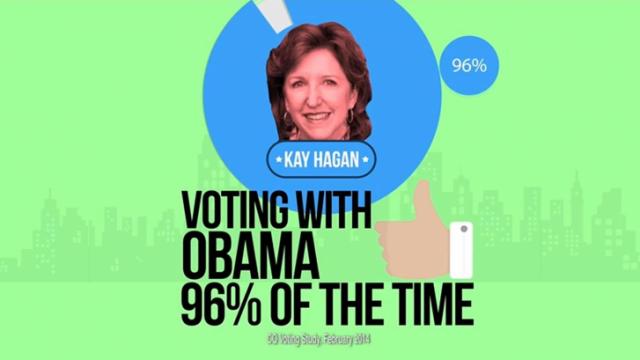 Raleigh, N.C. — Call it the Republicans' 95 percent solution for the U.S. Senate campaign.

"Kay Hagan has voted for President Obama’s failed partisan agenda 95 percent of the time during her tenure in Washington," reads a recent release from Thom Tillis' campaign.

Tillis, a Republican and the current state House speaker, is running to unseat the first-term Democrat.

A similar claim can be found in a variety of campaign commercials from other Republican groups and conservative independent expenditure organs.

"Voting with Obama 96 percent of the time, Hagan cast the deciding vote for Obamacare," says the anchor in a July Crossroads GPS commercial.

These lines are something of karmic payback for Hagan, who benefited from a similar claim leveled against then-Sen. Elizabeth Dole in 2008. As was the case back then, the numbers were presented without any sense of nuance or context. But as far as they go, they're not incorrect.

WHERE THEY COME FROM: The percentages in question come from rankings published by Congressional Quarterly, a magazine popular among political junkies. The raw data from the rankings are behind a paywall but have been referenced frequently by political journalists.

This isn't a measure of all votes cast in the Senate. Rather, CQ starts keeps track of any bill on which the president has taken a public position. According to CQ, Obama has taken a position on 37 percent of all Senate votes if you count nominations, about 17 percent if you include only legislation.

So why the conflict between Republicans on whether Hagan votes with Obama 95 percent as Tillis says or 96 percent as claimed by Crossroads?

CONTEXT: "Criticizing people's roll call votes in either party is a tricky business," said David Holian, an associate professor of political science at the University of North Carolina at Greensboro who studies Congress.

Congress and legislative bodies are more politically polarized than ever. Where there used to be overlap between the most conservative Democrats and the most liberal Republicans, there is a higher premium on party unity than there was two decades ago.

How the Senate functions of late also makes votes harder to parse, he said. Individual measures don't push through on their own but are tacked onto large omnibus measures that carry many different policies, meaning senators are often forced to take the good with the bad.

"It's hardly surprising under those circumstances that Democrats agree with Democrats at a pretty high rate," he said.

That doesn't stop political campaigns from using the figures to tie senators standing for re-election to unpopular presidents of their own party.

In 2008, the Democratic Senatorial Campaign Committee used the fact that Dole voted with then-President George W. Bush 92 percent of the time in the so-called "Rocking Chair ads" that featured two old men talking politics on the front porch. A similar claim was leveled against U.S. Sen. John McCain of Arizona during his 2008 presidential run and against other Democrats running for re-election this year.

Percentages by themselves, Holian warns, can be a bit misleading.

In 2009 and 2010, the last years that Tillis served as a rank-and-file member of the General Assembly, voting stats compiled by legislative staff show he voted with  the Democratic majority 87 percent of time. Taken out of context, it might seem that Tillis, a Republican, was somehow playing for the other team on a number of votes until you realize that 23 other Republicans voted even more closely with what was then a Democratic majority and that even the most quarrelsome Democrat that year, Rep. Pricey Harrison, D-Greensboro, voted with her party leaders 94 percent of the time.

In Hagan's case, Holian points out, she is "the fifth least supportive Democrat" when it comes to the president's agenda, as measured by CQ.

PUSH BACK: For her part, Hagan's campaign points to high-profile instances in which she broke with the president. Early in her tenure, Hagan voted against the FDA regulation of tobacco, for example. She has also voted against trade deals forged by the administration and voted against the budget put forward by Senate Democrats in 2013 due, she said, to defense cuts.

Hagan has also co-sponsored legislation with McCain to give multinational companies incentives to "repatriate" their overseas profits to the United State without paying a tax penalty, which Obama has opposed.

"Not only has Kay worked with her Republican colleagues to get measures like that passed, but she has spoken out when something isn't right for North Carolina. Speaker Tillis has shown he is unwilling to put North Carolina first," said Hagan spokeswoman Sadie Weiner.

OTHER MEASURES: Hagan touts the fact that National Journal ranks her as the "most moderate" senator in a new campaign ad. That ranking is based on a compilation of scores on different issues.

There are other measures of party loyalty as well. The Washington Post's data for 2013 shows that Hagan has voted with her party 92 percent of the time. That's the same score landed by North Carolina's other senator, Republican Richard Burr.

Holian said political scientists prefer a more comprehensive, and somewhat harder to understand, measure available on VoteView.com that ranks lawmakers from -1 for the most liberal to +1 for the most conservative, with 0 being dead center. Based on that measure, Hagan scores roughly -0.25, in the quartile of left-of-center lawmakers closest to exactly moderate.

Even with some data on her side, Holian said, Hagan and others in the same spot find the 95 percent claim devilishly hard to push back against.

"The response always sounds technical and like you're trying to have it both ways," he said. 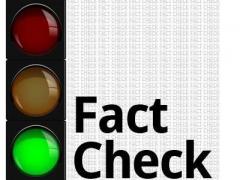 THE CALL: As far as it goes, the 95 percent claim gets a green light on our fact-checking scale. Of course, so does Hagan's claim to be ranked "the most moderate senator." Voters would be well served to gather some more context before deciding whether either of those measures are meaningful.