Fact Check: Did GOP raise taxes on 80 percent in NC? 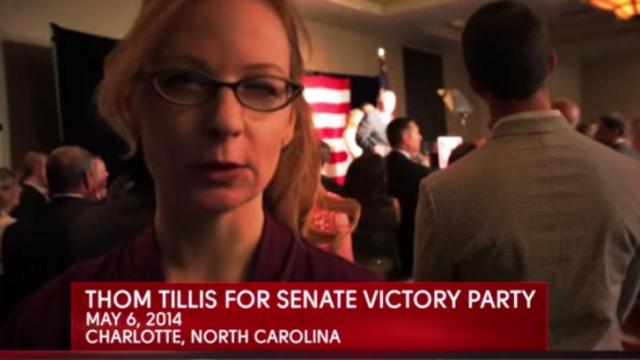 Raleigh, N.C. — In some ways, North Carolina's U.S. Senate race has been going on for months, at least in terms of television advertising. Conservative groups such as Americans for Prosperity have focused their advertising on incumbent Sen. Kay Hagan, a Democrat, while independent spenders such as Senate Majority PAC have focused on Thom Tillis, despite the presence of seven other Republicans in the primary.

Once Tillis, the current state House speaker, did take home the Senate nomination last week, Democrats lost little time in redoubling their efforts to paint him as someone who has the interests of the very wealthy, rather than ordinary workers, at heart.

The ad that got most people's attention was titled "Closer Look" by Senate Majority PAC and featured a woman standing at Tillis' victory rally on primary night.

"He's up there right now making big promises, but take a closer look," the woman says in a hushed tone as Tillis gives a stem-winder in the background.

The commercial then purports to run down Tillis' record: "Speaker Tillis gave tax cuts to the wealthy and big corporations, even kept breaks for private jets and yachts. He raised taxes on 80 percent of North Carolinians."

That last claim – "He raised taxes on 80 percent of North Carolinians" – was one that Senate Majority PAC made in a second commercial that began airing at the same time, and it seems like one of those lines custom made for politicos to hammer over and over again.

But just because we're probably going to hear it over and over again doesn't make the claim true.

NUTS AND BOLTS: Senate Majority PAC is an independent spending group linked to U.S. Senate Majority Leader Harry Reid that helps Democrats in Senate campaigns. Leaders of the group say it spent about $850,000 to air the ad over two weeks in North Carolina, starting May 9.

In supporting material for the ad, Senate Majority cites both an Associated Press story and a report by the left-leaning Budget and Tax Center, both of which were focused on a broad tax reform measure passed by the General Assembly in 2013.

"Accounting for the expiration of the state EITC, the bottom 80 percent of taxpayers, on average, will see their taxes increase under the tax plan compared to the current tax law," the Budget and Tax Center report said.

The EITC is the earned income tax credit, which has given a boost to low-income workers. The credit was "refundable," meaning that workers who qualified could get cash back even if they owed no income tax.

THE FINE PRINT: There are two important things to note immediately, both of which raise questions about the 80 percent claim.

Breaking down the 2013 tax package

First, the EITC had been set to expire at the end of 2013, a sunset first imposed by Democrats in 2007 when they controlled the General Assembly. Republican lawmakers, who now control both the House and Senate, rightly point out that they extended the credit for one year and say their 2013 tax bill did nothing to the EITC that wasn't already going to happen. Democrats rightly point out that the GOP certainly could have included another extension in their tax bill but chose not to.

Much more damning for the commercial are the words "on average" included in both the Budget and Tax Center analysis and the AP report.

"An analysis by the left-leaning N.C. Budget and Tax Center concluded that, on average, the lower 80 percent of North Carolinians will pay more in total state taxes in 2014 than under the 2013 system. Those paying substantially less are concentrated in the upper 20 percent of income earners," the AP wrote.

However, "on average" does not mean every person in that 80 percent of North Carolinians will pay more.

While it's certainly correct to say the tax bill kept sales tax caps for things like big private boats and did reduce the corporate income tax, to say the bill "raised taxes on 80 percent of North Carolinians" appears to be an over-simplification.

PUSH BACK: Asked for Tillis' response to the ad, campaign manager Jordan Shaw said the assertion was a "ridiculous claim."

"A study conducted by economists at Suffolk University found that North Carolina's tax reform results in tens of millions of dollars in tax cuts for every income category," Shaw said.

That study was commissioned by the conservative John Locke Foundation and concludes, "The average North Carolina household in every income category received a tax cut from the 2013 tax reform."

The study also says other tax reductions "more than compensate for any increases in tax payments that are the result of minor expansions of the sales tax base or the elimination of the state’s earned income tax credit (EITC) that were implemented under the law."

To some extent, this is a case of dueling economists, with a conservative analysis backing the tax passed by conservatives and a liberal analysis finding fault. But just as it is incorrect to say everyone in the 80 percent will see a tax increase, it would be a similarly egregious reading of the Suffolk study to say all North Carolinians get a tax break under the plan. There will be some people who pay more and some who pay less in virtually every tax bracket, depending on a number of factors.

EXPERTS: Since the Budget and Tax Center's work is at the heart of the argument here, we asked the center's director, Alexandra Forter Sirota, what she made of the 80 percent claim.

"It's just a very inaccurate use of the 80 percent number," Sirota said.

She said it is important to note that, when the report concluded that the 80 percent of taxpayers who earned the least – those families taking home less than $84,000 per year – would on average see tax increases, the center was speaking about what someone would pay across all taxes, including income and sales taxes.

It would be correct to say that at least 35 percent of families would pay more in income taxes, she said, accounting for the fact that the EITC expired. Another 16 percent would see their income taxes neither go up nor down.

Sirota added that, because the sales tax revisions mainly expanded the tax base – applied sales tax to more items – it would be reasonable to assume that some of those who saw no change in their tax burden or paid only a small amount less would actually end up paying more to the government overall once sales taxes are factored in.

"We feel confident that there is a majority who would experience a tax increase given the total tax package," she said.

It's impossible to put a firm number on that idea, however, because records don't exist that can match what someone pays in income tax with how much they end up paying in sales taxes during a given year.

All of that said, however, Sirota said it was a misrepresentation of the center's work to claim that 80 percent of taxpayers would end up paying more.

OTHER FACT CHECKS: Two other media organizations have fact-checked this claim. The Washington Post concluded, "On its face, it is pretty absurd to think that a tax reform bill that cut rates and eliminated tax loopholes ended up raising taxes on 80 percent of the people in the state. Broadly speaking, the wealthy do appear to gain more from the 2013 tax overhaul, but they also pay the lion’s share of income taxes."

THE CALL: There are times when our @NCCapitol team differs with our national colleagues on fact checks, but this is not one of them.

Senate Majority PAC is trying to make the point that the benefits of the 2013 tax reform bill accrued more to the wealthy. Republicans don't shy away from that claim and argue that, because corporations and wealthy individuals pay the most in taxes, they will, of course, see the greater share of any broad-based tax reform.

"North Carolina’s tax reform will make the state more economically competitive and attractive for job creation," says Tillis' camp, essentially making the case that lower taxes on corporations will benefit everyone. That statement is at the core of a fundamental difference between Republican and Democratic politicians these days, with Democrats pushing back that such "trickle down" schemes don't necessarily ensure benefits will reach those lower on the economic ladder. Republicans are insisting that lower taxes have led to lower unemployment in the state.

The voters will get to settle that economic dispute. But in its zeal to win the argument and the election, Senate Majority PAC is misinterpreting an analysis of the 2013 tax plan and making a statement that is unsupported by the facts. The director of the center whose report is the basis of the 80 percent claim says it is an inaccurate use of their analysis. At the end of the day, the 80 percent claim is simply not right.

We give this ad, and any other that repeats this claim, a red light.