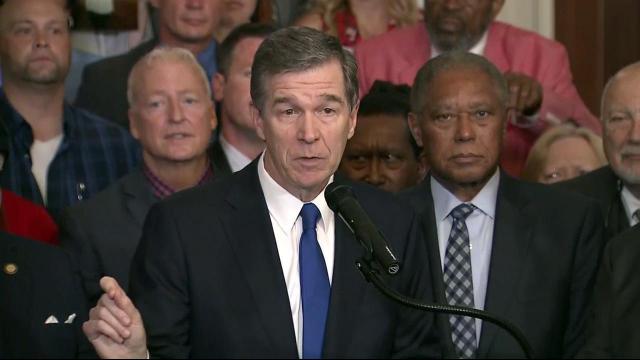 North Carolina’s Roy Cooper enters a re-election year as one of only three Democratic governors in the South.

Cooper also leads the only state where the governor and legislature didn’t agree on a full budget for fiscal year 2020.

The state House and Senate passed a budget in late June. But Cooper vetoed it just days later, saying it didn’t do enough for education and health care.

The state House voted to override Cooper’s veto on Sept. 11, but the Senate hasn’t been able to wrangle the votes.

“Radical (Gov. Cooper) has seen his approval rating plummet after refusing to give teachers their raises or increasing ed funding while holding the state hostage over expanding Obamacare,” the NC GOP tweeted on Feb. 25.

The tweet includes misleading information about the governor’s stance on education and why he vetoed the budget. But, since we’ve previously addressed a claim about the reasoning behind Cooper's veto, we’re going to focus on his approval ratings.

Is it true that they have plummeted?

PolitiFact and WRAL reviewed multiple polls conducted before and after Cooper vetoed the budget on June 28.

The word plummet means to “drop sharply and abruptly,” or “drop straight down at a high rate of speed.” Most polls show a slight dip, if any at all.

Experts who spoke with PolitiFact said use of the word “plummet” in this case exaggerates what poll numbers show about Cooper, who they say is generally in good shape for an incumbent facing re-election.

When we reached out to the NC GOP, its digital director Sasha Duncan pointed us to polling from Civitas Institute, a conservative think tank in North Carolina. Duncan pointed out that Cooper’s approval rating dropped from 58 percent in March 2019 to 51 percent between Oct. 15-17, when the poll was conducted.

The same survey showed Cooper’s disapproval rating rising by 6 percentage points, from 29 percent in March to 35 percent in October.

There are a couple reasons the Civitas poll doesn’t support the GOP’s tweet:

“I would say that, generally, movements of less than 10 percent would not be considered ‘significant,’” said David McLennan, director of the Meredith College Poll.

The Civitas polling results were unveiled and discussed at an event in October, according to the Carolina Journal newspaper. At the event, Institute President Donald Bryson said Cooper’s approval drop was “nothing for him to complain about.”

“That’s where an incumbent would want to be late in the year before an election year. But it’s still something to watch,” Bryson said.

The results of five different periodic polls show Gov. Roy Cooper's approval rating hovering around 50 percent. Each poll result here is depicted along with its margin of error, showing the range of equally likely values.

“There is certainly a downward trend in his overall approval rating, but it is slight,” Usry said.

As for the reason behind the drop? Usry and Jason Husser, the Elon Poll’s director, agreed that there’s little hard evidence to tie the ratings drop to the budget stalemate.

What do other polls show? Much smaller dips.

Meredith College polls show that Cooper’s approval rating fell 3.5 percentage points from 48.6 percent in October to 45.1 percent in February, McLennan said. Their margin of error was 3 points, he added.

Polls conducted by High Point University found Cooper’s approval rating to be 40 percent in February, 40 percent in November, and 41 percent approval in April.

PPP found Cooper’s approval rating to be 40 percent in June and 45 percent in October, he said.

“I would consider a 7 point drop to be pretty significant if it was showing up in polling across the board, but it’s not,” Jenson said in an email. “And even if you did drop from 58% approval to 51% approval, that’s something most politicians these days would take in a second!”

J. Miles Coleman, associate editor of Larry Sabato's Crystal Ball politics blog, agreed with Jensen’s assessment that Cooper is in a good position. He pointed to surveys conducted by MorningConsult at the beginning of 2019 and the end of the year.

The margin of error in the Morning Consult polls is only 1 percent.

“That type of double-digit negative movement would qualify as 'plummeting,’” Coleman said of Perdue’s numbers. The Crystal Ball blog currently considers the race to be “leaning” in Cooper’s favor, he added.

The NC GOP tweeted that Cooper’s approval rating has “plummeted” and, as evidence, they cited polls from a conservative think tank. But there are several reasons the GOP’s claim is inaccurate.

The GOP cited a poll showed a 7-point dip, which experts don’t consider significant. Other polls show Cooper’s approval rating as stable. And experts, including the president of a conservative think tank, believe Cooper is in good position.

The tweet exaggerated the reality of Cooper’s polling numbers. So we rate it Mostly False.