Fact Check: Political claims
WRAL News and others have fact-checked many of the statements Hagan and Tillis have made over the course of the first two debates, and many of the claims in the third debate were repeats.

But one statement jumped out as particularly newsworthy.

The candidates were asked about a recent action by the U.S. Supreme Court and other federal courts that could clear the way for same-sex marriages in North Carolina. Tillis, as speaker of the House, and Senate President Pro Tem Phil Berger are using a relatively new state law to claim standing in the case and battle to keep North Carolina's current ban on gay marriage in place.

In answer to the question, Tillis said, "28 months ago, 60 percent of the people of North Carolina decided that they wanted to define marriage as an institution between a man and a woman."

This is a relatively easy numbers question, and it's pretty clear that Tillis is overstating the case.

Results from the May 8, 2012, primary election show 1,317,178 voters backed the marriage amendment; 840,802 voters opposed it. While that means 61 percent of those who voted backed the amendment, it doesn't mean 61 percent of all North Carolinians did or do today.

North Carolina's current population is closing in on 10 million people. The 2010 Census fixed the state's population at 9.5 million, and in July 2012, just after the referendum, the best-guess estimate was 9.7 million.

Strictly speaking, roughly 1.3 million out of those 9.7 million people, or 13 percent of the state's population, cast ballots in favor of the amendment. Granted, those were the folks who showed up, so they had the largest voice in the matter.

However, it would be misleading to say that only 13 percent of the state backed marriage. Polls at the time predicted the ballot measure would win handily. Public Policy Polling, a Democratic pollster, for example, predicted 59 percent of voters would back the amendment.

Another caveat: There are 6.6 million registered voters in the state, which leaves the opinions of at least 3 million people unaccounted for in election-oriented surveys, although a lot of those are people under the age of 18.

The importance of registered voters versus general population comes into focus by looking at the Elon University Poll from April 2012, which drew its sample from all North Carolina residents. It found, "Six out of 10 people in North Carolina would oppose an amendment to the state constitution that prevents any same-sex marriages, domestic partnerships or civil unions, according to the latest Elon University Poll." Only 32 percent of state residents backed the amendment as described by the poll.

The differences between the PPP and Elon polls suggest there was a gap in the attitudes of North Carolinians generally, and those who showed up to vote. The two polls also suggest that 32 percent may be closer to the low-water mark for anti-gay marriage attitudes in the state, rather than 13 percent.

It's worth noting that Republicans had more hotly contested races during that 2012 primary, which turned up GOP turnout compared with Democrats. Since Republican voters are, in general, more socially conservative than Democrats, it's a fair bet that the electorate for that primary was somewhat more disposed toward the amendment than the general population.

Also, it appears that attitudes are shifting. A recent Elon University Poll found "More likely voters said they supported (45%) same-sex marriage than opposed (43%). These numbers changed only slightly when looking at registered voters or residents."

It's also worth noting that 61 percent of people in that survey who said they were backing Tillis also favored the ban on gay marriage. Of those supporting Hagan, 67 supported allowing for same-sex marriage. 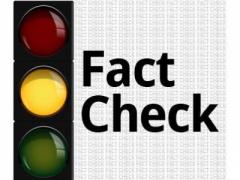 THE CALL: If Tillis had said 60 percent of "voters" or "those who voted" had decided to ban gay marriage, this claim would be getting a green light on our fact-checking scale. To say that 60 percent of all North Carolinians backed the amendment at the polls certainly overstates voter turnout and appears to overstate the overall support for the amendment. While Tillis was not making the 60 percent number up out of the clear blue sky, he did attach it to the wrong set of people during the heat of the debate. Earlier in the day, his office was careful to attribute the number to voters rather than the entire population. He gets a yellow light for the claim.