During remarks before a virtual meeting with Mexican President Andrés Manuel López Obrador, President Joe Biden highlighted the two nations’ historical ties by noting that many Americans have Mexican ancestry.

"As you know, the fastest-growing population in the United States is Hispanic," Biden said on March 1. "And 60% of the Hispanic population is Mexican American. They’re an integral part of our history."

But there’s a problem with the first part of his statement: Asian Americans are actually the fastest-growing racial or ethnic group in the United States.

According to Census Bureau data, the number of Asian Americans grew by 28.7% from 2010 to 2019, the most recent 10-year period of the census. The Hispanic population ranks second for growth, at 20%, narrowly surpassing Native Hawaiian-Pacific Islanders, at 19.6%.

It’s important to note that Hispanics can be of any racial category; the figures we’re citing here are for Hispanics of any race. The totals for other groups do not include any individuals who also have Hispanic ancestry 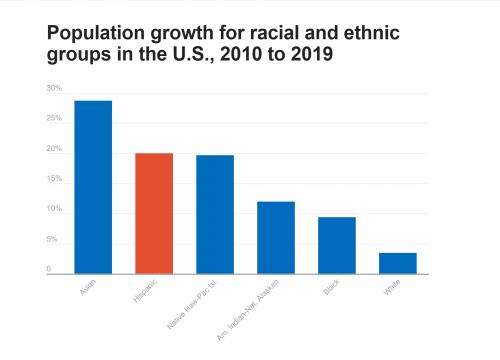 The White House told PolitiFact that Biden misspoke, and that he should have said that between 1995 and 2020, Hispanics went from 14% of public-school enrollment to 27%, according to the National Center for Education Statistics. By comparison, the Asian American percentage rose from 4% to 5%.

However, Biden’s comments were not made within the context of discussing education or schools.

Hispanics did register the largest numerical population increase of any group. 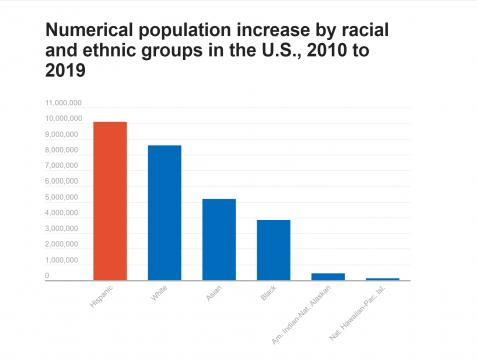 From 2010 to 2019, the number of Hispanics in the U.S. rose by more than 10 million, outpacing the increase in white Americans, which was a bit under 8.6 million. That’s striking, since there are many more whites overall than Hispanics. The white population is 250 million, compared with a bit more than 60 million for the Hispanic population. The increase in Asian Americans was just shy of 5.2 million, reaching a total of 19.5 million.

Still, Biden said "fastest-growing," which refers to the rate of growth, not the absolute number of additional people.

Biden said "the fastest-growing population in the United States is Hispanic."

That’s incorrect: The fastest-growing group is Asian Americans, with Hispanics ranking second. Hispanics did record the largest numerical increase in population of any group between 2010 and 2019, but that’s a different measure than "fastest growing."

The White House said Biden should have referred to the fastest-growing school populations, even though his remarks overall did not address education.

We rate the statement Mostly False.