Democratic presidential nominee Joe Biden tailored a portion of his remarks in Warren, Mich., to a key concern for voters in the heavily industrialized battleground state: international trade.

Is that correct? It depends on which measurement you use.

The trade deficit is essentially a comparison of a country’s imports and exports. If there are more imports than exports, the country will have a trade deficit. If there are more exports than imports, the country will have a trade surplus. The United States hasn’t had a trade surplus since the early 1970s, but the scale of deficits has varied widely.

There are two main measurements for trade deficits. One looks only at goods, which are tangible products. Another looks at both goods and services, which can be anything from legal and accounting services to payments for intellectual property.

Here’s a chart, with the president’s party noted by color, red for Republicans and blue for Democrats: 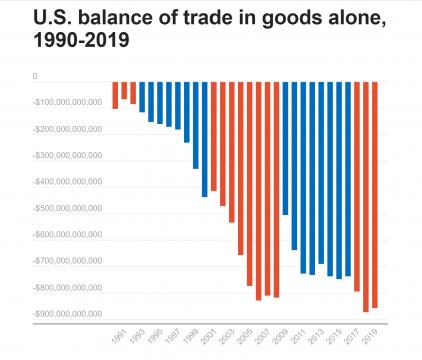 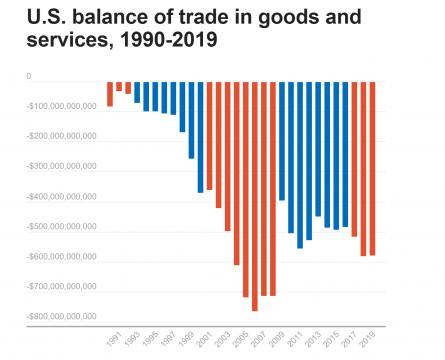 At the same time, the goods-and-services deficit is higher now than it was during any year of Barack Obama’s administration, in which Biden served as vice president.

The Biden campaign told PolitiFact that while it wasn’t an all-time high, the overall trade deficit did hit a 12 year high.

It’s worth noting that Biden isn’t the only political figure to cherry-pick trade deficit statistics that suit his talking points. Trump himself has focused on the goods deficit and ignored the goods-and-services deficit in a way that exaggerates the trade deficit figures he inherited.

Biden said the "U.S. trade deficit is at an all-time high under Trump in the last three years."

The trade deficit in goods was indeed higher under Trump in 2018 and 2019 than in any previous year, though that was not the case in 2017.

However, this ignores a substantial surplus in services. When services are factored in, the overall trade deficit was larger in five separate years during George W. Bush’s administration.

We rate the statement Half True.