Joe Biden told voters that President Donald Trump doesn’t have his facts straight when it comes to public safety, despite Trump’s attempts to cast himself as a law-and-order candidate and Biden as the symbol of chaos.

"If Donald Trump wants to ask the question: Who will keep you safer as president? Let’s answer that question. First, some simple facts," Biden said in Pittsburgh on Aug. 31.

PolitiFact decided to fact-check Biden’s "simple facts." We found that his claim is partly accurate and needs context.

Biden’s claim of a 15% decrease is supported by the change in the rate of violent crime; the decline in the total number of crimes was less than 15%.

Based on data collected by the FBI, the fact-checking organization found that the number of violent crimes per 100,000 people in Obama’s last full year in office, 2016, was nearly 16% lower than the rate in 2008, the year before Obama took office. Likewise, the total number of violent crimes in 2016 was about 10% lower than the total number in 2008.

‘Murder rate now is up 26% across the nation’

In discussing what Biden says has happened to the murder rate under Trump, Biden’s campaign cited an analysis by crime analyst Jeff Asher that pointed out a 26% increase in the number of murders.

The analysis was not adjusted for population and did not specify the rate change. (For instance, the FBI calculates the murder rate as being per 100,000 people.) But Asher and two other criminologists not involved in the analysis told PolitiFact that since the population changes very little from one year to the other, the murder rate increase would also be around 26%.

While Asher’s analysis focused on select cities, not nationwide data, he said it can be useful for estimating the national trend. Usually, the FBI in late September releases a final report on nationwide crime statistics from the previous year.

What Biden’s remarks left out

Biden touted a decrease in violent crime during his vice presidency and denounced a 2020 spike in murders under Trump. But he highlighted different metrics and different time sets for each administration. By doing so, Biden presented an incomplete and skewed picture of the crime data.

A more accurate examination of crime would focus on the same set of data and comparable time periods, said Jay Corzine, a criminologist at the University of Central Florida.

The FBI figures on violent crime include the offenses of murder, rape, robbery, and aggravated assault. Biden focused on this broader number for the claim about his vice presidency, and flagged only murder data for the claim on Trump’s record. 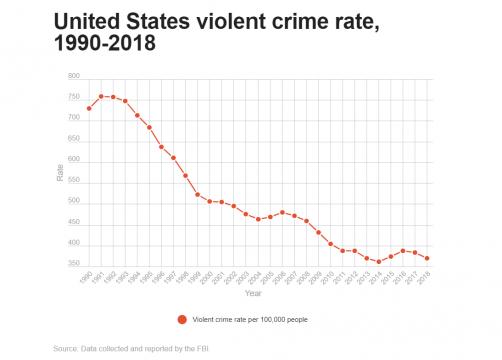 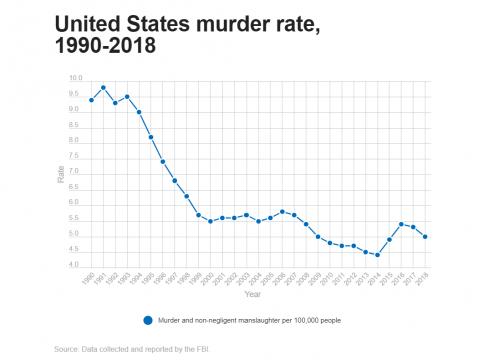 How much does a president or vice president impact crime statistics?

Most of the influence any presidential administration has on crime statistics is indirect, based on their support for anti-crime measures and funding assistance, criminologists told PolitiFact.

"Most crime is local and what really impacts crime rates are local policing, state laws — what states and cities do," said James Alan Fox, a criminologist at Northeastern University.

Homicide numbers are also volatile, there’s wide fluctuation from year to year that has nothing to do with laws or policies, Fox said. Built into the homicide figures are a lot of chance factors, such as where a bullet hits and whether the person is taken to a hospital on time, he said.

Murders in some cities have spiked this year amid the coronavirus pandemic, yet violent crime across the board (including property crime) hasn’t similarly increased, Corzine noted.

It’s unclear exactly why murders are up in some places. However, "bad things can happen in the course of idle time," Fox said, noting that the pandemic caused many people to be out of work and out of school with no summer activities.

Biden said, "When I was vice president, violent crime fell 15% in this country. ... The murder rate now is up 26% across the nation this year under Donald Trump."

The violent crime rate fell nearly 16% from 2008, before Biden’s vice presidency, to 2016, his last full year as vice president. A crime analyst found that in some cities, the total number of murders has gone up at least 26% in 2020 compared to the same timeframe in 2019 (experts said the crime rate likely would also be up about 26%).

But Biden’s comparison is based on snapshots of different crime data and at different time intervals during each presidency.

There’s data to support Biden’s claim, but his statement leaves out important details or takes things out of context.

We rate it Half True.