Fact check: CNN breaks down the 7 kinds of dishonesty to expect in a late-campaign Trump rally 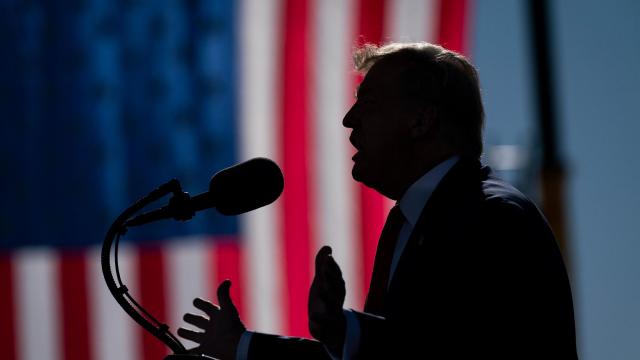 CNN — President Donald Trump is closing his campaign with a torrent of lies. His October rally speeches have been notably dishonest even by Trump standards.

Trump is known for meandering off script, and he hasn't stopped ad-libbing as Tuesday approaches. But as he dashes from state to state -- the President has 14 rallies scheduled from Saturday through Monday -- his dishonesty has tended to follow a rough pattern.

We can break his rally false claims into seven broad categories.

Trump uses his rally speeches to try to convince voters that the worsening coronavirus crisis is actually improving.

Even as confirmed new cases, hospitalizations and the test positivity rate all increase, Trump keeps falsely claiming that "we're rounding the turn." And he keeps falsely saying that the spike in cases is merely the result of the US doing more testing, though this assertion has been publicly rejected by top federal officials.

Touting his handling of a pandemic that has killed at least 229,000 Americans, according to Johns Hopkins University data, Trump continues to declare that the death toll was "supposed to be" 2.2 million. That 2.2 million figure was most likely an extreme-worst-case estimate for what would happen if US authorities took no action at all to fight the pandemic.

Trump has wrongly asserted that anyone who gets the virus will just "get better" -- citing the unrepresentative example of his own case, for which he received extraordinary medical care. And he has promoted a fictional conspiracy theory, which you can read about here, about media coverage on the question of Covid-19 immunity for people who get the virus and survive.

The Joe Biden of Trump rally speeches is much different than the actual Joe Biden.

Trump often devotes a chunk of his rally speeches to his serially dishonest effort to undermine confidence in the election in general and mail-in voting in particular.

Trump keeps baselessly suggesting that mail-in voting is rife with "cheating." Though he has consistently trailed in national public polls, he keeps baselessly claiming that the only way he can lose is if his opponents commit "massive fraud." And he has continued to cite either inflated or imaginary supposed examples of nefarious election behavior. He has claimed, for example, that 50,000 ballots were found in a river; that has not occurred.

Trump's rally accounts of what happened in the past are reliably incorrect.

Trump likes to tell a story about how Biden refused to say the words "law and order" at their first debate. In fact, Biden did say those words.

Trump has become fond of saying that he got impeached merely for calling the president of Ukraine to say congratulations. In fact, Trump got in trouble because he said a whole lot more than congratulations on the call -- such as asking Ukraine's president to investigate Biden.

Trump has continually cherry-picked economic numbers to make the national situation sound better than it is.

Through September, the country was still down more than 10 million jobs from before the pandemic. But Trump keeps telling his rally crowds that he is setting records for job creation, with 11.4 million jobs added in the last five months. That's a real figure, but he doesn't mention that it was preceded by an even bigger record loss of 22.2 million jobs over the previous two months.

Trump has also started touting the record economic growth in the third quarter, a 33.1% annualized and seasonally adjusted rate. He does not mention that, because of the record decline that preceded this gain, the economy is still smaller than it was prior to the pandemic.

Sometimes Trump ignores the pandemic period entirely. He says at rallies that he created 700,000 manufacturing jobs, even though, through September, it was actually a net loss of 164,000 manufacturing jobs since he took office. How does he get to plus-700,000? By stopping the clock in February -- when it was a net gain of 483,000 during his presidency -- and then doing his usual exaggerating.

Trump factually touts some of the things he has done in office: create a Space Force, move the US embassy to Jerusalem, withdraw from the Trans-Pacific Partnership. But he also generates rally applause by citing nonexistent achievements.

He says Mexico is paying for his border wall, though the wall has been funded solely by American public money. He says he got the Veterans Choice program passed, though President Barack Obama signed the Choice bill in 2014. (Trump signed a 2018 law to modify and expand the program.) And he says he is the first president ever to get China to pay even "10 cents" in tariff money, though it is Americans paying for his tariffs and though the Obama-era government took in billions in revenue from tariffs on China.

We've shown you that Trump's rally speeches are filled with lies about important subjects. But they are also dotted with trivial lies.

After he insults CNN, he regularly claims that he just saw CNN turn off the red light on its camera. CNN photojournalists do not turn off their cameras when he attacks the network -- and they do not even use any red light that would be visible to Trump. In other words, Trump is just making this up.

Perhaps Trump's weirdest rally lie is something he has almost invariably said when he speaks in Michigan, where he plans to hold his final Monday rally. He explains that he was once named "Man of the Year" in the state.

Trump has never lived in Michigan, and this did not happen.