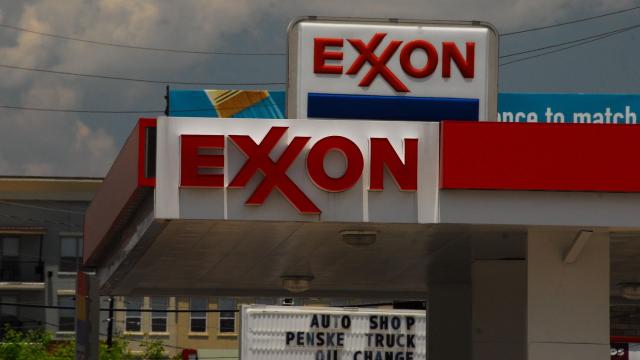 NEW YORK (CNNMoney) — ExxonMobil is trying to turn the tables on its climate change opponents.

The oil company said it's the victim of a vast "conspiracy," brought on by multiple cities and counties in California.

San Francisco, Oakland and other municipalities have sued Exxon, demanding the oil giant and its rivals pay billions to cover damage from looming sea level rise due to climate change.

In a court filing in Texas on Monday, Exxon argued that these California cities and counties have contradicted themselves by admitting in bond sales that climate change risks are unpredictable. Exxon threatened a counter-lawsuit over alleged "abuse of government power."

Exxon said that while these cities and towns warned that "imminent sea level rise presented a substantial threat to its jurisdiction...none of the municipalities disclosed to investors such risks."

Federal law requires companies and governments to reveal risks to investors before selling securities like stock or in this case muni bonds.

Exxon essentially accused the municipalities of fraud, arguing that this "stark and irreconcilable conflict" suggests the allegations local governments made against the oil industry "are not honestly held and were not made in good faith."

In the court filing, Exxon requested permission to investigate potential "abuse of process" and "civil conspiracy" by deposing 16 individuals, including city officials from Oakland and San Francisco who are leading the lawsuit against the company.

A spokesman for San Francisco's city attorney called the Exxon move "outrageous" and an "attempted end-run around the California courts." He added, "it's exactly what you would expect from a company like Exxon."

Representatives from Oakland did not respond to a request by CNNMoney for comment.

"It wouldn't be farfetched to see this as an attempt to harass the officials in the lawsuit as a way to scare them off of it," Burger said.

Jane Montgomery, an environmental law partner at law firm Schiff Hardin, said Exxon's strategy is designed to make it more difficult for the California cities and counties to pursue their lawsuit.

"They are just turning the tables...I don't know that it kills" the California lawsuits, said Montgomery, who has represented energy companies.

The Exxon claims mark the latest flashpoint between Big Oil and opponents of the fossil fuel industry.

The long-running battle accelerated last year when San Francisco and Oakland became the first major U.S. cities to attempt to shift the costs of climate change from the public to oil companies themselves. The Bay Area cities demanded Exxon, Chevron, BP, ConocoPhillips and Royal Dutch Shell pay for the costs of sea walls and other protections against rising sea levels.

In the petition filed on Monday, Exxon paints itself as a victim of "abusive law enforcement tactics and litigation" by those trying to achieve "political objectives."

"ExxonMobil finds itself directly in that conspiracy's crosshairs," the filing said, adding that Exxon has reason to believe local municipal officials could "conceal and potentially even destroy evidence."

To make its case, Exxon pointed to various examples of alleged hypocrisy by the California cities it's being sued by.

For instance, last year Oakland told investors in a bond offering that "the City is unable to predict when" events such as "sea rise or other impacts of climate change...could occur, when they may occur" or their impact on the local economy.

Yet in Oakland's lawsuit against Exxon and other oil companies it spelled out specific consequences of climate change. Oakland said that by 2100 the city is likely to have up to "66 inches of sea level rise" that along with flooding will threaten its sewer system and property at a cost of up to $38 billion.

Exxon has faced renewed pressure over climate change following the release of a recent Harvard study that concluded the company "misled the public." The study found that for nearly 40 years Exxon publicly raised doubt over the dangers of climate change even as scientists within the company acknowledged the growing threat.