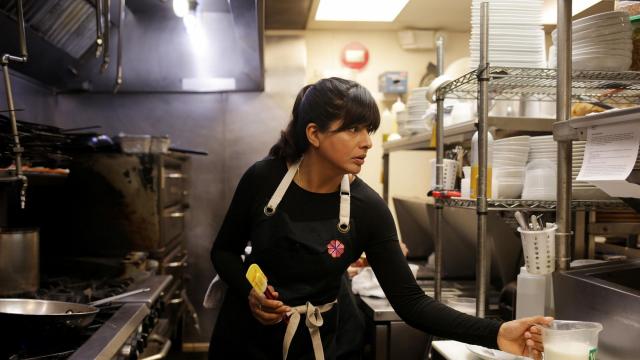 RALEIGH, N.C. — As a child growing up in Chandigarh, India, chef Cheetie Kumar knew that Diwali, the Hindu festival of lights, was approaching by the aromas emanating from the kitchen. She remembers catching the scent of whole milk simmered with freshly cracked cardamom and carrots in the air as she ran outside to play.

At Garland, the restaurant in downtown Raleigh she opened with her husband, Paul Siler, in 2013, Kumar makes Indian and pan-Asian food with a vibrant North Carolina slant. A self-taught cook, she thrives by uniting global flavors and erasing the geographic boundaries of ingredients and techniques.

Her food is nuanced and edgy, and so is she: Kumar moonlights as the lead guitarist for a rock band, Birds of Avalon. “It’s a creative outlet as well as a source of creativity,” she said.

Her path to professional kitchens wasn’t a linear one. In the early 1980s, when she was 8, she and her family immigrated to New York and lived on Gun Hill Road in the Bronx. There, her relationship with cooking developed more from duty than delight. Her parents — each has a Ph.D. in biochemistry — worked full time in immunology research. Despite the demanding schedule, Kumar’s mother prepared Punjab-style homemade meals virtually every weeknight.

“We went out for dinner maybe four times a year,” Kumar said. Her mother’s dinners always had at least one vegetable, like the fragrant cauliflower-and-potato dish aloo gobi, and some kind of dal finished with tomato tarka alongside basmati rice, chapati, yogurt and mango pickle.

“Helping my mom make dinner was the chore I loved to hate,” Kumar said.

Over time she grew fond of preparing family meals, but it was a worn cookbook anthology from the 1960s that guided her toward cooking professionally.

“I bought that giant, dusty cookbook for a nickel at a Bronx library book sale,” she said. When she realized she could make some of the dishes, like Madhur Jaffrey’s mango chicken, inspiration struck: “I devoured those recipes. I was both intimidated and challenged. I wanted more.”

The menu at Garland connects the dishes she makes from childhood memory with ingredients that speak of the South. Her shrimp and okra borrows a spice blend from her mother, made with cumin, coriander, mango powder, black salt and turmeric. Paired with flash-fried large shrimp from eastern North Carolina, the dish straddles her past and present.

“As a family we always did things differently,” Kumar said. “I was taught at an early age that everything is up for interpretation, even how we celebrate Diwali.”

The holiday, which is celebrated on Nov. 7 in the United States this year and commemorates the triumph of light over darkness, is both a sacred ritual observed at home and an animated communal celebration with neighbors and friends. There is plenty of food, especially sweets.

Gajak, a sesame seed-and-peanut brittle, and gajar halwa, the pudding infused with carrot and cardamom that she recalled from her childhood, are Kumar’s favorites. There is a mystery in the making of gajak that still has her rapt, decades later: The flavors don’t truly shine until the brittle has been allowed to set for about 20 or 30 minutes.

“There’s something magical that occurs that accounts for the transformation,” she said.

And the bright carrots of the gajar halwa “scream celebration,” she said; the dessert gets more lush as it slowly simmers in the spice-infused milk.

Kumar harnesses these nostalgic Indian dishes and reimagines them to fit her locale. For a recent dinner at the James Beard House in New York, Kumar served a riff on gajar halwa with yogurt custard and carrot sherbet.

“It wasn’t uniquely Indian,” Kumar said, “but it was authentic to me.”

8 to 10 large peeled and shredded carrots (about 4 cups/455 grams), prepared with a food processor into long strands or grated on the large holes on a box grater

1. In a wide, heavy-bottomed skillet (don’t use nonstick) over medium heat, melt ghee, then add carrots. Stir until carrots are well coated with ghee. Reduce heat to medium-low and cook until carrots are somewhat dry and caramelized, about 20 to 25 minutes, stirring often so they don’t scorch.

2. Once the carrots are nice and dried out, stir in the milk and cardamom and simmer, stirring every few minutes, until the milk has reduced and is almost fully absorbed, about 20 to 25 minutes.

3. Sprinkle in the sugar, mix well to combine, and cook 5 to 8 more minutes until the mixture is almost dry and jammy. Serve warm or cold with toasted nuts sprinkled over the top.

1 teaspoon ghee, plus more for greasing the pan and rolling pin

1. Grease the back of a sheet pan and a rolling pin with ghee and set aside.

2. Heat a wide, heavy-bottomed skillet over medium-low heat for 1 to 2 minutes. Add the ghee, jaggery and 1 tablespoon water and stir well to combine. Cook, stirring occasionally, until the caramel starts to brown and reaches 300 degrees on an instant-read or candy thermometer, about 8 to 10 minutes; you’re looking for the “hard crack” stage or the point where a drop of the caramel in cold water hardens into a crunchy toffee. Don’t rush this by turning the heat up too high: The caramel will burn in an instant.

3. As soon as you reach 300 degrees, remove pan from the heat and quickly fold in the peanuts (and any fine powder from chopping), both types of sesame seeds, the salt and cardamom, if using, and stir until well combined. Immediately turn the mass out onto the back of the sheet pan and roll to an even 1/4-inch thickness, keeping the sides as straight as possible.

4. Let set until cool enough to handle but still pliable, about 3 to 4 minutes, and slide onto a cutting board. Cut into 2-by-2-inch pieces. (Alternatively, when fully cool, the brittle can be broken into uneven, rustic chunks.) Let set completely until hard before serving. The flavors start to come together after it’s been setting for 30 minutes, but it’s best after 45 minutes, or even 1 hour.

Note: Jaggery adds savory undertones that you can’t get from other sugars. Find it online, at Indian grocery stores or some larger Asian supermarkets (look for blocks or balls, rather than granulated jaggery).