Extra security at Apex High after threat written on wall 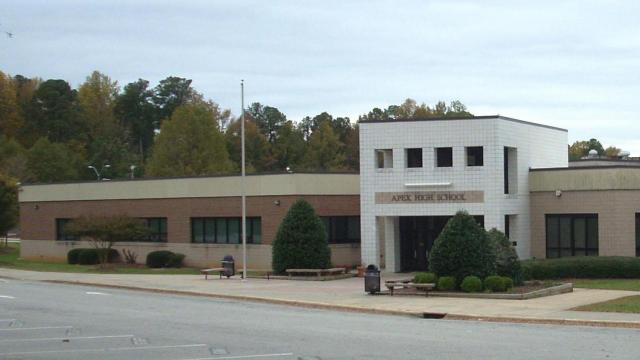 Cary, N.C. — The Wake County Public School System stepped up security Wednesday morning at Apex High School after a threat was written on a bathroom wall last week that mentioned the number 13.

Cary officials said the threat was received 10 days ago when someone wrote in pencil on a bathroom wall “Don’t Come To School.” A police investigation found the threat to be unsubstantiated, they said.

However, the school delivered an automated phone call to parents around 6:30 a.m. Wednesday about the threat. Classes start at 7:10 a.m.

School district spokeswoman Lisa Luten said someone asked about the threat on a police social media page on Tuesday night. To stop rumors, school officials decided to send the robocall.

"To prevent the spread of rumors, we notified parents after a citizen inquired about the hoax on a social media account operated by law enforcement," Luten said.

According to several Facebook posts, some parents questioned administrators’ decisions to call after many students had already left to catch school buses that would carry them to the school.

“Was not expecting to hear about a threat minutes before my daughters plan to leave for school!” one mother posted to a Facebook group for Apex High parents.

“My son was on the school bus when I heard the message, It was found out last week. Why it was not handled till this morning?” another mother asked.

“I think they could’ve informed parents last night so that we could discuss with our kids and make an informed decision,” a third parent added.

Luten said officials decided to send the robocall at 6:30 a.m. because they wanted to reach parents at a time when they weren’t sleeping and when students were getting ready.

Last week, Leesville Road High School had increased security after a social media post showed a threat written on a bathroom wall there.

Since that threat, Luten said, there have been at least five copycat threats: two more at Leesville Road, one at an elementary school and one at a middle school.