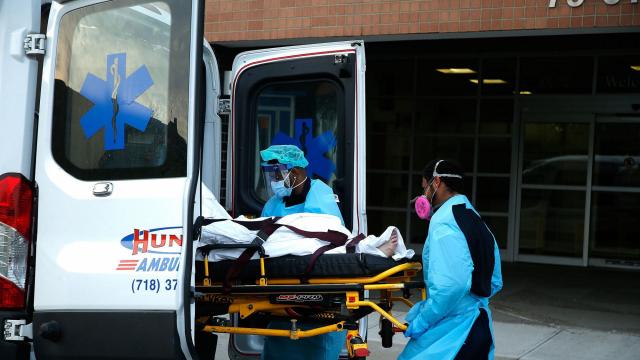 CNN — As some researchers say deaths could rise significantly in coming weeks, the number of confirmed coronavirus cases in the United States has topped 1 million and the deaths toll has surpassed the total of US troop fatalities during the Vietnam War.

As of Tuesday afternoon, there are more than 1,010,000 people in the United States who have or have had the virus, according to a tally from health officials by Johns Hopkins University. At least 58,365 people have died.

A total of 58,220 Americans died during the war in Vietnam, where fighting lasted more than 10 years.

The first known US coronavirus-related fatality was February 6, less than three months ago.

The milestones come at a time when seven models anticipate a rise in coronavirus cases that will depend on how much "contact reduction" Americans practice, the Centers for Disease Control and Prevention said.

One model cited by the White House coronavirus task force has upped its predicted death toll, projecting 74,000 people in the country will lose their lives to the virus by August. That is almost 7,000 more deaths than a model last week.

The projection was adjusted because of longer peaks in some states and signs that people are becoming more active again, according to Dr. Chris Murray, director of the University of Washington's Institute for Health Metrics and Evaluation.

"It's a safer strategy to get the number of infections in the community down to a really low level, and then testing and contact tracing and isolation can work," Murray said.

Gov. Brian Kemp said Georgia is "moving forward with data and information and decisions from the local public health officials, meeting and working within the guidelines of the great plan that the President has laid out."

Independent researcher Youyang Gu, who developed one of the models shared by the CDC, projects the number of daily Covid-19 deaths in Georgia will nearly double by early August.

The model assumes social distancing will relax slightly as the state continues to reopen. The number of Covid-19 deaths per day in Georgia will jump from 32 fatalities on May 1 to a projected 63 people dying each day by August 4, the model forecasts.

Atlanta Mayor Keisha Lance Bottoms has been vocal about her opposition to Kemp's decision to reopen some businesses. She told CNN's Chris Cuomo on Monday: "Nobody wants to be at odds with the governor."

"We can't sit by while people die," she said of herself and other Southern mayors. "We're frustrated and all we have is our voices to continue to push and hammer home to people to please stay home."

Other city leaders believe governors are acting too early.

In Houston, Mayor Sylvester Turner said there's little he can do about Texas Gov. Greg Abbott's decision to let phase one of the state reopening begin Friday.

"We cannot put forth any orders that would be more restrictive than what the governor has imposed. And I agree. He sets the ceiling," he told CNN's Wolf Blitzer. "That doesn't mean we can't put forth recommendations."

He said the governor's order was "more than I would have done." The mayor said he had concerns about restaurants, theaters and retail stores being allowed to open.

The virus likely will be here in winter, Fauci says

Dr. Anthony Fauci, director of the National Institute of Allergy and Infectious Diseases, said he's almost certain Covid-19 will be here in the winter.

"I'm almost certain it will come back, because the virus is so transmissible and it's globally spread," Fauci said during an Economic Club of Washington webinar.

Fauci said the virus will not disappear from the planet because new cases will appear in the Southern Hemisphere during its winter.

If the United States has the ability to identify, isolate and contact trace in a "highly effective and efficient way by its winter, the number of cases and deaths may not climb as high when coronavirus returns.

"When it does, how we handle it will determine our fate," he said. "If we are unsuccessful, or prematurely try to open up and we have additional outbreaks that are out of control, it could be much more than that; it could be a rebound to get us right back in the same boat that we were a few weeks ago."

Some cities and states will start testing residents who don't have symptoms to better understand how many people have been infected.

"These are folks that are on the frontlines, helping us get to where we need to go, helping us have food delivered to our homes," he said.

In Boston, 1,000 asymptomatic residents will undergo diagnostic and antibody testing by Friday to evaluate exposure to the virus in the city, Mayor Martin Walsh said.

In New York, about 15% of the 7,500 people who have been tested in the state's antibody study have tested positive, Gov. Andrew Cuomo said.

Those tests are "not ready for prime time," a former acting director of the CDC told Stat, a health news website.

"As we learn whether that means you are protected in the future, there could be value in that," Dr. Richard Besser told Stat, but "the science isn't there yet to be able to say what those tests mean."

"I worry that people will get a false sense of security and they can change their behavior based on the results of that test, or have a false sense of concern if it's a test that isn't detecting protections that they may actually have."

Though it's unclear when New York City's schools will reopen (a decision is expected by week's end), the city is adopting a special grading system to accommodate home learning and will stage a special citywide virtual graduation, Mayor Bill de Blasio said.

"You may not have the traditional ceremony that you were looking forward to, we're going to give you something you're going to remember for the rest of your life and you will cherish," he said.

States gear up to reopen in coming weeks

Meanwhile, some governors are moving forward with reopening their economies.

Missouri will start next week, with some statewide restrictions set to be lifted Monday, Gov. Mike Parson said.

"Our plan is working, the health care system is not overwhelmed, and we are winning the battle," the governor said.

Under the governor's plan, any business can reopen as long as 6 feet of social distancing can be maintained, and indoor retail businesses will have to limit their number of customers to no more than a quarter of their normal capacity.

In Kentucky, after the state started loosening restrictions for some health care services, the governor said the next phases of reopening will be announced week by week -- with more restrictions loosened weekly, starting May 11.