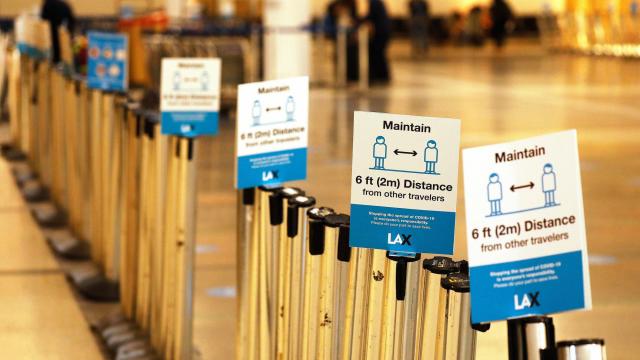 CNN — States are issuing a new wave of mask mandates and social restrictions as record numbers of Covid-19 hospitalizations and daily cases strain US medical systems.

More than a dozen states have announced a variety of new rules in recent days -- some requiring face covering, and others limiting gatherings and business occupancies or even generally asking people to stay home.

These new rules come as Covid-19 cases, hospitalizations are rising and are expected to worsen before any vaccine -- though promising candidates are appearing on the horizon -- can turn the tide.

In West Virginia, Gov. Jim Justice pushed back this week against opposition to his recent mandate that masks be worn in all public indoor spaces, with some exemptions.

"How do I feel about masks? Well, I don't like them. I don't want to wear them. ... But more than anything, I want us to get more control, more control over this terrible virus that is just eating us alive. I want us to absolutely wear a mask," Justice said Monday.

The US average for daily cases across a week hit a record for the pandemic Monday, at over 155,000. Monday's one-day total was over 166,000 -- the country's third-highest one-day total, Johns Hopkins University data show.

On the same day, another pandemic record for the US: More than 73,000 Covid-19 patients were in hospitals, according to data from the COVID Tracking Project.

The daily average number of Covid-19 deaths reported across a week was at 1,145 on Monday -- the country's highest since May 24.

Across the nation, hospitals are filling up.

"When you look at Utah or Montana or the Dakotas, they just have such a fewer number of ICU beds and specialists that when they get at capacity, it's going to be a breaking point for them in a way it wasn't for us in the coastal cities and states," Dr. Dara Kass, an emergency medicine physician at Columbia University Medical Center, said Monday at an online event hosted by Stat.

In St. Louis, officials announced modeling data suggesting ICU capacity could run out around the first week of December if current rates continue.

As some state governments respond with new rules, some medical experts say it's almost inconceivable that all states aren't on the same page with at least one strategy.

"We need every single state in this country to have a mask mandate," Dr. Carlos del Rio, executive associate dean of Georgia's Emory University School of Medicine, told CNN Tuesday. "For thousands of people dying every day ... we cannot wait for a vaccine."

Recent vaccine developments should encourage people to "hang in there a bit longer and double down on the public health measures without necessarily shutting down the country," Dr. Anthony Fauci, director of the National Institute of Allergy and Infectious Diseases, told CNN Tuesday.

That should include uniform mask wearing; avoiding crowds, especially indoors; washing hands, and doing as many things as possible outdoors instead of indoors, he said.

"I just can't understand why there's pushback against that. They're not difficult to do, and they save lives," Fauci said.

States' new rules are piling up

States issuing new coronavirus mandates or restrictions this month include:

California: Gov. Gavin Newsom on Monday said 41 of the state's 58 counties, representing 94% of the population, will now fall under the most restrictive of the state's four-tier reopening system. In this tier, where infections are considered widespread, guests are welcomed only outdoors at restaurants, gyms and places of worship.

The state's face covering mandate is being strengthened to require residents to wear a mask whenever they are outside of their homes, with few exceptions.

Iowa: The governor issued a basket of new orders running from Tuesday through December 10, including a requirement that people in indoor public spaces must wear masks if they're unable to socially distance for 15 minutes or longer. Also, "restaurants, bars, bowling alleys, arcades, pool halls, bingo halls, and indoor playgrounds are required to close at 10 p.m. and cannot host private gatherings of more than 15 people," the governor's office said.

Massachusetts: The governor announced a stay-at-home advisory this month, lasting from 10 p.m. to 5 a.m.

Michigan: The governor on Sunday announced a "three-week pause targeting indoor social gatherings and other group activities." During these three weeks, casinos, movie theaters and group exercise classes will be closed, and high schools and colleges must stop in-person classes. Bars and restaurants will be open only for outdoor dining, carry-out and delivery.

New Mexico: A statewide order closing in-person services for all nonessential activities is in effect from Monday through November 30, the governor's office said. "New Mexicans are instructed to stay at home except for only those trips that are essential to health, safety and welfare -- such as for food and water, emergency medical care, to obtain a flu shot or to obtain a test for Covid-19," the governor's office said. Restaurants are allowed to offer curbside pickup and delivery services.

Ohio: Gov. Mike DeWine on Monday announced new limits on social gatherings, weddings and funerals. The revised order prohibits dancing or socializing in open, congregate areas. Guests must be seated, and food should be served to them at their seats. No more than 10 people can sit at a table, and those people must be from the same household.

Oklahoma: Starting Thursday, all bars and restaurants must close by 11 p.m. -- though drive-through windows and curbside pickup are allowed after that -- and restaurant tables must be 6 feet apart, the governor's office said Monday.

And starting Tuesday, all 33,000 state employees under the executive branch will be required to wear a mask in common areas or when they're around other people.

Rhode Island: Several new measures went into effect this month, including a stay-at-home advisory in effect from 10 p.m. to 5 a.m. on weeknights and 10:30 p.m. on Friday and Saturday.

Washington state: From Monday through December 14, restaurant and bar service will be limited to outdoors, with capacity limits, and to-go service, the governor said.

Indoor social gatherings with people from outside the home are also prohibited, unless participants quarantine for 14 days prior, or quarantine for seven days before the gathering and receive a negative Covid-19 test result no more than 48 hours prior.

West Virginia: The governor on Friday issued a mask mandate for all public indoor spaces, with some exemptions.

Also, the Navajo Nation -- located in parts of New Mexico, Arizona and Utah -- began a three-week "stay-at-home lockdown" period Monday. Residents are allowed to leave their homes only for emergencies and "essential activities," such as shopping for groceries or working at an essential business. Those businesses must close each day at 3 p.m.

Preparing for a vaccine

While the high efficacy rates coming out of the Moderna and the Pfizer/BioNTech vaccine trials are a good first step, a vaccine has yet to be approved and experts will also have to decide which groups should get vaccinated first.

An advisory committee to the US Centers for Disease Control and Prevention is scheduled to meet next week to decided who will get the vaccine first, a longtime member of the committee said.

Among the first to be vaccinated will likely be health care workers and essential workers, as well as people over age 65 and people with existing health conditions. The question is what order those groups should come in, Schaffner said.

"Health care workers are baked in -- that's the first thing to happen, no doubt about that," he said. But after that, committee members will need to define what underlying conditions would merit getting a vaccine early on and what defines "essential workers" -- a group that could include everyone from police officers to supermarket clerks.

And even once a vaccine is approved and more doses become available, it will be months before the US returns to anything resembling normalcy.

"There's not going to be one day when, you know, the light switch is going to go on and everybody is going be immune," McClellan said. "But we should do a gradually better and better job of containing spread, of avoiding hospitalizations and moving beyond the pandemic in the months to come."

"But we have got a couple of tough months to get through first," he added.