Coronavirus hospitalizations in US reach an all-time high with more than 60,000 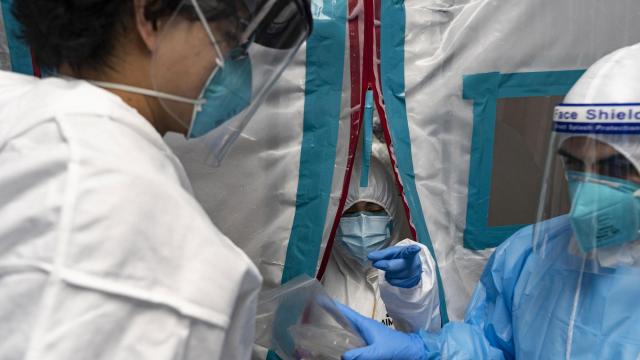 CNN — With the number of coronavirus cases in the United States skyrocketing, many health experts warned the total number of people hospitalized in a given day would rise too.

On Tuesday, the number of people with Covid-19 at US hospitals for the first time topped 60,000.

The COVID Tracking Project, a volunteer organization that compiles data on coronavirus cases, said the number as of Tuesday was 61,694. That's 2,024 more people than were hospitalized on April 15, the previous record.

The numbers are troublesome because rises in hospitalizations are usually followed by rises in the US death toll. Last week saw five days in a row with more than 1,000 Covid-19 deaths -- the first time that's happened since August.

More than 239,000 people in the US have died since the start of the pandemic, according to Johns Hopkins University. Another 110,000 or more deaths are projected in the next two months, according to the University of Washington's Institute for Health Metrics and Evaluation.

Hospitals at 'brink' of hitting capacity

As of Tuesday, 44 states accumulated at least 10% more Covid-19 cases in the last week than the week before that, according to Johns Hopkins data.

The rising numbers have begun taking their toll on American communities.

In Texas, the hard-hit county of El Paso has six mobile morgues and has asked for four more trailers, County Judge Ricardo Samaniego said Monday. That comes as the state nears 1 million infections since the pandemic's start.

Most regions in Illinois are seeing "far higher rates" of Covid-19 hospitalizations than they did during the spring, Gov. J.B. Pritzker said Tuesday.

Outside of Chicago and suburban Cook County, "much of Illinois' communities are experiencing the worst that they've seen yet" when it comes to hospitalizations for coronavirus, the governor said.

"The numbers of cases tend to translate into numbers of hospitalizations, two to four weeks later," she said. "And if we're going to be seeing deaths from those cases, that will come later yet."

In Ohio, all parts of the state are affected by an "unprecedented spike" in hospitalized patients, said Dr. Bruce Vanderhoff, the incoming chief medical officer for the state's health department.

"Every county in the state is feeling the brunt of rising Covid-19 hospitalizations," Vanderhoff said. "If we don't control the spread of the virus and our case numbers, we won't be able to continue caring for the acutely ill without postponing important, but less urgent care."

And among the issues that are concerning officials -- not just in Ohio, but across the nation -- are the strained and exhausted staff that are taking care of the surging number of patients.

"We're exhausting the available supply of trained personnel," Vanderhoff said. "They can't escape the rising numbers of Covid-19 numbers in their communities."

Utah Gov. Gary Herbert said the state's hospital capacity is shrinking and went on to declare a state of emergency and a statewide mask mandate Monday.

"They are really at the brink of not being able to take any more people ... particularly in our intensive care units," the governor said Monday, speaking on the state's shrinking hospital capacity.

Fauci advises Americans to 'hang in there' with health measures

Dr. Anthony Fauci knows people across the country are weary from the daily bad news about the pandemic, but he has some advice for Americans.

"Hang in there a bit longer," he told CNN's Jake Tapper on Tuesday. "Do the things you need to do and we'll be OK."

Fauci said that with almost all states seeing rising numbers of cases, and some reporting records in new reported positive tests and hospitalizations, the situation could get much worse.

"That's the reason why we really are pleading with the American public to really take (it) seriously," he said.

Help is coming soon through vaccines, which could be dispensed as early as December, said Fauci, who has been the director of the National Institute of Allergy and Infectious Diseases for 36 years.

Until a vaccine is approved, Fauci urged Americans to continue practicing public health measures that health officials have recommended: avoid crowds, social distance when outside your home, wear a mask and wash hands frequently and thoroughly.

Drugmaker Pfizer announced Monday that its Covid-19 vaccine is more than 90% effective, according to preliminary data. Fauci said having a highly effective vaccine may get more people to overcome any doubts about getting vaccinated.

"When you hear something is 90 to 95% effective, it makes it much more likely that someone would want to get vaccinated," he said.

Fauci said he thinks the majority of Americans will be able by the end of April get the two shots required for vaccination.

An alarming rise in infections

After reporting 100,000 new coronavirus infections seven days in a row, the US has now surpassed a total of more than 10 million cases since the start of the pandemic -- far more than any other country.

And that number will likely keep rapidly climbing, one expert told CNN.

"We are watching cases increase substantially in this country far beyond, I think, what most people ever thought could happen," Michael Osterholm, director of the Center for Infectious Disease Research and Policy at the University of Minnesota, told CNN's Anderson Cooper on Monday. "It will not surprise me if in the next weeks we see over 200,000 new cases a day."

The country's seven-day average of new daily cases was 119,238 on Monday -- more than three times higher than it was around mid-September, when it was at a post-summer-surge low.

Newark has a hot spot curfew

Newark, New Jersey, where the test positivity rate is 19%, is enacting a curfew in hot spots in the city. The 9 p.m. (10 p.m. on weekend) curfew affects three zip codes.

The order issued Tuesday by Mayor Ras Baraka says only people who traveling for work or an emergency can be out on the streets.

"I know we are all tired, but the virus is not, therefore we must remain vigilant and do what is necessary to get this under control and save lives," Baraka said.

Other measures include the cancellation of sports for two weeks, limiting gatherings to 10 people (except for religious services), and no one can visit long-term health care facilities for the two weeks.

Other areas where curfews have recently been enacted include Denver and Rhode Island, which called its mandate a stay-at-home order. El Paso County in Texas recently put a 10 p.m. to 5 a.m. curfew into effect but it ends on Wednesday.

Azar: Vaccine will be available for vulnerable people by end of December

Azar's comments came a day after drugmaker Pfizer announced its Covid-19 vaccine appears to be more than 90% effective, based on early data.

"The timeline is Pfizer will be producing and delivering to us approximately 20 million doses of vaccine each month, starting at the end of this month in November," Azar said, adding that a different company, Moderna, is already producing its vaccine candidate.

"We have anticipated that we will have enough vaccine by the end of December to have vaccinated our most vulnerable citizens and nursing homes and otherwise; and by the end of January enough for all health care workers and first responders; and enough for all Americans by the end of March to early April to have general vaccination programs," Azar said.

The distribution of the company's two-dose vaccine will be a "logistical challenge," said Dr. John Burkhardt, Pfizer's vice president of Global Drug Safety Research and Development, on Monday. That's because the shot needs to be stored in extremely low temperatures, far below the capacity of standard freezers.

"There's a whole suite of very experienced and talented people at Pfizer who are solely working on this," he said.

US to start distributing new antibody treatment this week

The US Food and Drug Administration on Monday said it had issued an emergency use authorization for Eli Lilly and Co.'s monoclonal antibody therapy to treat mild to moderate coronavirus infections in adults and children.

The single antibody treatment, called bamlanivimab, will be provided free of charge, Azar said at a news conference.

Monoclonal antibodies are laboratory-made proteins that mimic the immune system's ability to fight off harmful antigens like viruses. This is the first monoclonal antibody to be authorized for use in treating coronavirus.

Bamlanivimab is specifically directed against the virus's spike protein, designed to block attachment and entry into human cells, the FDA said.

"Getting new therapeutics like this to patients has the potential to save thousands of lives and significantly reduce the disease's burden on our health care system," Azar said.

This treatment must be delivered by an infusion, so the government will require it to be administered in hospitals, outpatients clinics or settings where the infusion can be properly monitored, officials have said.

About 80,000 doses are available for distribution, though the US government has a contract for more, Azar said.

States with a larger share of the country's confirmed Covid-19 patients, and regions with larger totals of hospitalized patients, will be given priority, officials said. The Department of Health and Human Services has posted online where the first shipments are going.

FDA authorization was based on a study published in the New England Journal of Medicine in October. It found the treatment seemed to lower the risk of hospitalization and ease some symptoms in a small number of patients with mild to moderate cases of Covid-19.