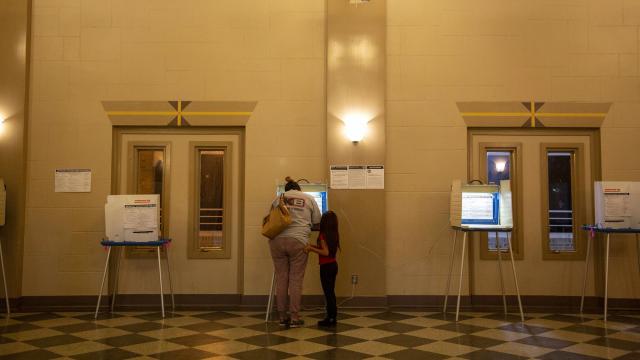 As the country faces a dual national crisis — a monthslong pandemic and economic devastation — voters were deeply divided on what mattered more: containing the coronavirus or hustling to rebuild the economy, according early exit polls and voter surveys..

Their opinion of which was more important fell along starkly partisan lines, with those who viewed the pandemic as the most pressing issue favoring Joe Biden for president, while those who named the economy and jobs broke overwhelmingly toward reelecting President Donald Trump.

Reflecting a pervasive pessimism, nearly two-thirds of voters said they believed that the country was heading in the wrong direction, according to an Associated Press canvass of those who had cast ballots — and those voters overwhelmingly picked Biden. And while Trump had attempted to focus the campaign on anything other than the pandemic, it remained a defining issue: More than 4 in 10 voters said it was the most important problem facing the country, far more than any other issue.

A separate survey — the traditional exit poll, conducted by Edison Research — asked the question differently; it found that, as important as it was to them, only about 1 in 5 voters considered the virus the top issue affecting their vote. More said the economy was, and a similar share said racial inequality decided their ballots.

The overwhelming majority of Trump supporters called the economy excellent or good while an equal share of Biden supporters said it was doing poorly.

Views of the virus also cleaved to politics: Roughly 4 in 5 Trump supporters called it at least somewhat under control, while as many Biden voters said it was “not at all under control.”

Those who reported that the pandemic had taken a personal toll tended to back Biden. More than a third of all voters said they or someone in their household had lost a job or income over the past eight months, and most of those voters favored Biden.

Those who did not vote in 2016, a group that the Trump campaign said would be key to reelection, appeared to show up in significant numbers — but they mostly turned out to oppose him. First-time voters appeared to favor Biden by wide margins.

Far fewer said they knew someone who had died from the virus, but among those who did, the vast majority chose the former vice president.

Moderate voters also swung heavily for Biden, in a tacit rejection of the “radical” label that Trump had sought to pin on him. Throughout his term, Trump has alienated moderates with his rhetoric and was never seen favorably by most independent voters.

It was these voters at the center whom Biden had most aggressively targeted, using a message of unity and American tradition to offer voters a respite from the bombast of the current president, and to push back against the Trump campaign’s portrayal of the Democrat as a tool of the left.

For the first time, not one but two probability-based, scientifically sound voter surveys were conducted amid the election. The Edison exit polls, conducted on behalf of a consortium of news organizations, were carried out by phone with voters who had cast ballots early, and by in-person interviews at voting places.

The Associated Press also conducted its own voter survey, called VoteCast, using a panel of online respondents assembled by NORC, a research group based at the University of Chicago.

The overall trends in the results were consistent between the two organizations’ surveys, although the exit polls appeared to show Trump running strongly in more states than the VoteCast survey did. The two polls also asked different questions of their respondents; results from both are referred to in this article.

Pre-election polls throughout this election season had shown that roughly 4 in 5 voters held strong opinions on Trump and his leadership, and strong feelings on both sides continued to define this year’s election.

Among those voters who cast ballots for Trump four years ago, about 9 in 10 supported him again this time. But Biden held onto an even stronger share of Hillary Clinton’s 2016 supporters.

That group was one among many — including suburbanites and political independents — that Trump had narrowly won when facing Clinton, but whose support he had long since lost.

In certain key states, Biden appeared to fall short of Clinton’s support four years ago among Latino voters, particularly men. In Florida, the exit poll put his lead in the single digits with Hispanic voters, and in Texas he was barely winning 3 in 5. But elsewhere his margin among Hispanic voters was much stronger, and nationwide he ran ahead of the president by more than 2 to 1.