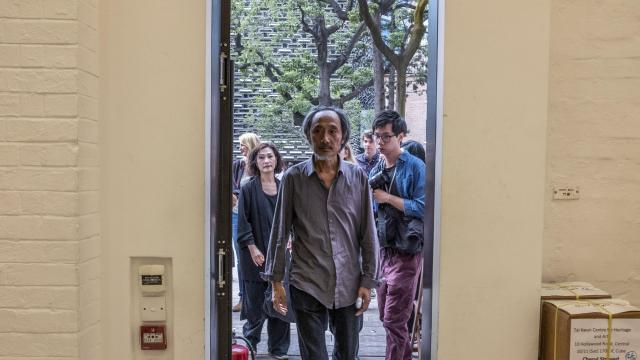 HONG KONG — An exiled Chinese novelist spoke at a literary festival in Hong Kong on Saturday, two days after his appearance had been briefly canceled in a move that was widely seen as the latest erosion of freedoms in the semiautonomous city.

The writer, Ma Jian, whose appearances at the Hong Kong International Literary Festival were reinstated at the last minute, said the reversal “proves the failure” of self-censorship.

Ma, a British citizen who lives in exile in London, said on Saturday that a robust literary culture helps to “safeguard the bottom line of our civilization.”

“Of course there is no way literature can resist a political force,” he told reporters at a hastily arranged news conference. But he said that “in fiction we find our real roots: the goodness of human nature.”

There had been concern that Ma might be taking a security risk by even traveling to Hong Kong, where a few booksellers who published titles critical of China’s Communist government have disappeared in recent years, only to turn up in custody on the Chinese mainland.

Ma’s appearances at the Tai Kwun Center for Heritage and Arts were thrown into doubt Thursday when the venue said it would not host them. Ma’s books have been banned in mainland China since 1987, and he says his new novel, the biting satire “China Dream,” is a political allegory of the country’s modern self.

“We do not want Tai Kwun to become a platform to promote the political interests of any individual,” Timothy Calnin, the center’s director, said in a statement Thursday. “We have therefore worked closely with the Hong Kong International Literary Festival to find a more suitable alternative venue.”

Tai Kwun reversed course on Friday, saying it had “reconsidered our position in light of the possibility that these events might be prevented from taking place altogether.”

Yet it was unclear Friday whether Ma, who previously lived in Hong Kong and has permanent resident status here, would even be allowed to enter the city when his flight landed that evening.

He later said on Twitter that he would be speaking at the festival as a novelist, “which is my only identity,” and that he was not a politician. “But anyone who has ever read me knows that my books are deeply political, and China Dream is no exception,” he added. “All literature is political, whether the writer intends it to be or not.”

Phillipa Milne, the festival’s director, told reporters on Saturday that its goal was to promote Hong Kong’s literary arts while also “supporting the principles of free speech by providing a platform for a diverse spectrum of inspirational local and international writers.” She did not take questions.

The festival came amid growing concerns about Hong Kong’s future as a haven for rule of law and civil rights in Asia. Last week, for example, the political cartoonist Badiucao, whose works satirize leaders of mainland China and Hong Kong, called off a solo exhibition in Hong Kong after receiving threats from Chinese authorities.

On Thursday, the Hong Kong authorities denied entry as a visitor to Victor Mallet, an editor at The Financial Times, a few weeks after he was expelled from the city. Mallet’s expulsion was widely seen as retaliation for his role in hosting a talk with a local independence advocate at the Foreign Correspondents’ Club of Hong Kong in August.

On Saturday, Ma declined to directly answer a question about whether he felt safe in Hong Kong, but he noted that he had informed the British authorities of his travel plans. “I know if I ever disappear, they will look for me,” he added.

Emily Lau, a former Democratic Party member of Hong Kong’s Legislative Council, said the back-and-forth over Ma’s appearances created an emotional “roller coaster” for many people in the city.

Lau said she believed the Hong Kong Jockey Club, which finances and operates the Tai Kwun center, had faced political pressure to cancel Ma’s visit, and that the reversal of the cancellation was not much of a victory because it had already set a damaging precedent.

“In Hong Kong we’ve never had democracy, but we enjoy freedoms,” she said. “Now it seems our freedoms are being taken away.”

A spokeswoman for the Jockey Club did not immediately respond to a request for comment on Saturday evening.

Ma, 65, has been barred from entering mainland China since 2011, and he spoke at the Hong Kong International Literary Festival as recently as 2013.

He was back this year to speak at a panel discussion on Hong Kong literature and to promote “China Dream,” whose title refers to the signature catchphrase of the Chinese president, Xi Jinping. The book, published in Britain this month, charts the disintegration of a Chinese official who is haunted by his violent past.

On Saturday evening, Ma told a packed auditorium that the totalitarian society that George Orwell had described in his dystopian novel “1984” had now been “completely and totally” realized in China. He also said he saw repression and propaganda in the Chinese mainland today that was eerily similar to that of the Cultural Revolution.

He said he feared that building the “China dream” that Xi envisions would require erasing China’s recent history.

“If we ignore history, what follows will be something even more horrible,” he said.