President Biden laid out the strategy for his American Rescue Plan during remarks on Friday afternoon.

He also signed several executive orders, including expanding food assistance to low-income families, and raising the minimum wage for federal workers and contractors.

This follows a flurry of COVID-related executive orders President Biden has already signed since taking office on Wednesday.

He again touted his call for Congress to pass his proposed $1.9 trillion COVID relief package.

The orders he signed Friday were aimed at helping Americans most at risk in the strained economy.

The new orders increased food assistance programs in the pandemic, helping more than 40 million adults and children in this country say they don't have enough to eat.

There are also provisions to increase protections for workers and guarantee a $15 dollar an hour minimum wage for federal workers and contractors.

"These are not the values of our nation. We cannot, will not let people go hungry," said Biden.

One of the orders also has a provision that calls on the Department of Treasury to identify and push out stimulus checks to 8 million people who were supposed to get them last year.

"Yesterday, we learned 900,000 more Americans filed for unemployment," said Biden, who said they join the millions of Americans already without jobs. Analysts estimate his American Rescue Plan will create 7.5 million jobs in 2021 alone.

Since his executive power only goes so far, President Biden will need to enlist Congress to help him establish broader​ reach.

'We have to move quickly:' Biden rolls out plan to speed vaccine rollout

The fate of the economic recovery is riding on President Joe Biden's mission to speed up the lackluster rollout of coronavirus vaccines.

While the development of vaccines happened faster than many had expected, distribution is lagging behind schedule, in part because of the chaotic presidential transition in the midst of the worst pandemic in a century.

Biden signed a slew of executive orders this week aimed at accelerating the distribution of vaccines and tests. It's a race against the clock, not just to save lives, but to keep the economy afloat.

"We won't see a strong economic rebound until we get broad distribution of the vaccine," said Kristina Hooper, chief global strategist at Invesco.

After a sizzling summer, the US economy slowed sharply at the end of last year as the pandemic worsened. The United States lost jobs in December for the first time since the spring. Another 900,000 Americans filed for first-time jobless claims during the final week of the Trump presidency.

Kevin Hassett, a former economic adviser to President Trump, told CNN Business the US economy is facing a "negative spiral" that could cause GDP to contract sharply in the first quarter, just like last year. 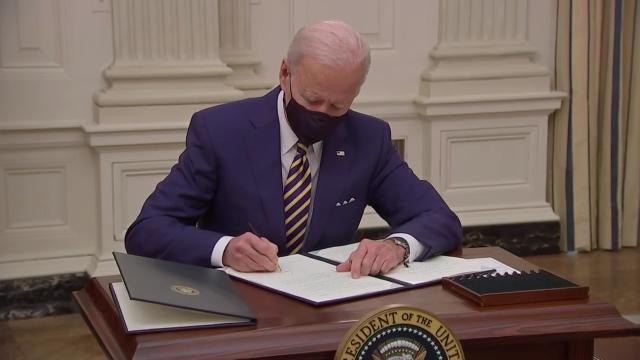 The pandemic has killed more than 400,000 Americans and the US health officials are warning the death toll could reach 508,000 by mid-February.

Rochelle Walensky, the new director of the Centers for Disease Control and Prevention, told NBC on Thursday that she doesn't think vaccines will be in every pharmacy in America by February, despite such predictions by Trump officials. Biden's goal is to distribute 100 million doses in the first 100 days — and the CDC official said that is still the plan.

The timing is critical because health restrictions and voluntary steps by Americans are crushing virus-sensitive parts of the economy, especially the service sector.

Millions of people whose jobs relied on restaurants, bars, hair salons, dry cleaners, movie theaters, cruise lines, hotels and countless other industries are out of work. The Back-to-Normal Index, designed by CNN Business and Moody's Analytics, shows the US economy is operating at just 81% of where it was in early March.

"The next leg of the recovery has to be driven by the service sector. Without it, we are going to stall out," said Aneta Markowska, chief financial economist at Jefferies. "You can't have a reopening of the service sector without putting the pandemic behind us."

'The vaccine has got to get here'

George Harman, a Winchester, Virginia, father of two, has sharply cut back on spending since going on unpaid leave from his job at a car dealership in early December. Harmanstopped working because he feared getting his elderly parents who live with him sick.

"I could physically go to work, but is it worth dying or infecting someone in my house?" said Harman, who has a history of heart disease.

Like countless other Americans, Harman is not eligible for unemployment and is running low on cash.

"The vaccine has got to get here," he said. "If I can get my parents vaccinated, I can risk it at that point. But I can't go into a place that I know has rampant spread of the virus and then take it home."

Biden plans to sign a series of executive orders Friday aimed at helping those in need, including a step that could help people in a similar situation as Harman. The White House said Biden will ask the Department of Labor to consider clarifying that workers who refuse unsafe working conditions can still receive unemployment insurance.

While executive orders will help, Biden needs Congress to pass legislation that would have a much bigger impact. Biden is asking lawmakers to pass his $1.9 trillion American Rescue Package, which calls for $1,400 stimulus checks to most everyone who makes less than $75,000, enhanced unemployment benefits, $350 billion in aid to state and local governments and $400 billion to defeat the pandemic.

Harman is hoping Congress acts — before he runs out of cash.

"We don't like to go trillions and trillions in debt, but you're facing a once-in-a-hundred years situation. You've got to do what is necessary," he said.

Wall Street is unfazed, for now

Although some economists and Republicans are worried about the size of Biden's proposal, Hassett, the former Trump economist, told CNN Business he broadly supports the $1.9 trillion package.

Markowska, the Jefferies economist, said the rescue effort will help but it won't solve the underlying problem.

"We've pushed the recovery as far as we can without the service sector. Without it, we just can't make progress — regardless of how much fiscal stimulus we put out there," she said.

At least so far, Wall Street is unfazed by the surging pandemic and sluggish vaccine rollout. The S&P 500 and Nasdaq finished at record highs Thursday, building on what was the best Election Day to Inauguration Day performance in the post-World War II era.

That's because markets are being juiced by emergency policies from the Federal Reserve that are forcing investors to bet on stocks. And investors are optimistic that the economy and corporate profits will fully recover, eventually.

"I don't think it matters to markets," said Invesco's Hooper, "but it definitely matters to the economy."


Copyright 2021 by WRAL.com and CNN. All rights reserved. This material may not be published, broadcast, rewritten or redistributed.