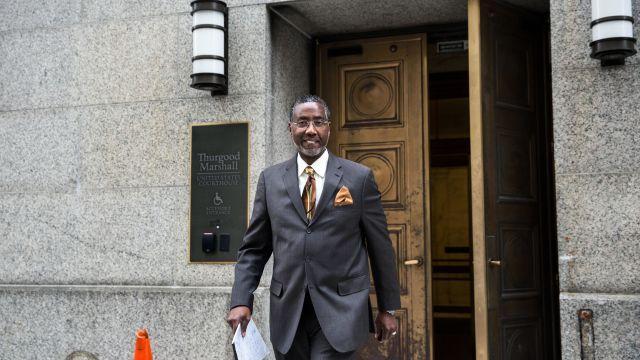 NEW YORK — Norman Seabrook, the once-powerful former leader of the New York City correction officers’ union, was found guilty of bribery and conspiracy on Wednesday in a case that cast a shadow over Mayor Bill de Blasio’s fundraising efforts and touched on corruption in the New York Police Department.

The jury returned a partial verdict in the afternoon. Jurors found Seabrook guilty of accepting a bribe but said they were deadlocked on a conspiracy charge. “Your job is not done yet,” said Judge Alvin Hellerstein, who presided over the case. “You have another count to consider.” An hour later, jurors returned to say they had found Seabrook guilty of conspiracy to take a bribe as well.

Federal prosecutors presented evidence that Seabrook, 58, steered $20 million of the Correction Officers’ Benevolent Association money into a risky hedge fund in exchange for a kickback potentially worth hundreds of thousands of dollars. It was the second time a jury heard evidence in the case: His first trial ended in a mistrial last fall.

When the first guilty verdict was announced Wednesday, some of Seabrook’s supporters began to cry. One woman shook her head and began to pray; a man held his face in his hands. “Don’t cry, baby,” Seabrook said to a supporter in the front row.

The verdict represented a remarkable fall from grace for Seabrook, who wielded significant power during the two decades he spent as the head of one of the most important public-employee unions in the city, with more than 20,000 members. He established himself as a blunt advocate for the city jail system’s rank-and-file and an unflinching defender of the Rikers Island jail complex. He was a master at using both charm and hostility to get his way in negotiations, and under his leadership, the city’s correction officers saw large gains in their salaries and pension benefits. At the same time, he accrued power and wealth, often outflanking mayors and correction commissioners in his influence.

As he left the courthouse Wednesday, a cigar in his mouth, Seabrook faced up to 20 years in prison for the convictions on one count of honest services wire fraud — or bribery — and one count of conspiracy. “I will be vindicated because God is still on the throne,” he said.

Much of the government’s case rested on the word of Jona Rechnitz, a wealthy real estate developer who both sides agreed was a prodigious liar with an unsavory history. “We are not asking you to like Jona Rechnitz,” a prosecutor, Lara Pomerantz, told the jury at the beginning of the trial.

Still, the prosecution relied on Rechnitz’s testimony to build a narrative that ultimately led to Seabrook’s conviction. Rechnitz, who pleaded guilty to fraud conspiracy and cooperated with prosecutors, said he brokered a deal between Seabrook and Murray Huberfeld, a family friend and the founder of the hedge fund Platinum Partners. Seabrook agreed to invest the union’s retirement money in Huberfeld’s fund, and in exchange, Huberfeld would pay him a cut of the profit, the government said.

Seabrook ended up investing $20 million in the fund, $19 million of which the union eventually lost.

It was a risky proposition for the prosecution to once again depend on Rechnitz, whose inconsistent testimony in the last trial seemed to lead to the hung jury. A juror in the fall referred to him as a “straight-up liar.” Prosecutors said that the bribe was delivered in a nearly cinematic scene: One December evening, Rechnitz took $60,000 in cash from a safe in his office, and crammed the bills into a handbag he had purchased from the Salvatore Ferragamo store, Seabrook’s favorite designer. He then delivered the bag to Seabrook before they attended a Torah dedication ceremony together.

Huberfeld, the fund manager, who was Seabrook’s co-defendant in the first trial, pleaded guilty to wire fraud conspiracy in May.

In this trial, Rechnitz was caught in fewer inconsistencies on the stand, and he seemed more prepared to answer the defense’s questions. He also spent less time talking about his relationship with de Blasio, testimony that dominated much of the first trial.

At that time, he said he donated tens of thousands of dollars to de Blasio’s re-election campaign in exchange for a direct line to City Hall, including the mayor’s personal phone number and email address. During the second trial prosecutors kept Rechnitz’s testimony more narrowly focused on his shady business dealings and on the payment to Seabrook.

The defense argued Rechnitz would say whatever he thought would help him get a more lenient sentence for his own crime. It was true, they said, that Rechnitz had showered Seabrook with expensive trips, fine cigars, fancy meals and flattery. But he did not betray his union in response.

“You can fault Norman Seabrook for falling for Jona Rechnitz’s act,” said Paul Shechtman, Seabrook’s lawyer. “But boy, was it a good act.” A few jurors wiped away tears as they left the federal courthouse. One said the verdict had been “emotionally raw.”

Richard Wade, a juror, said the panel had found Rechnitz credible. “The look in his eyes said that he was broken,” Wade said.

After the trial concluded, Geoffrey S. Berman, the U.S. attorney for the Southern District of New York, spoke in front of the courthouse. “As long as there are public servants who place self-interest ahead of the people they are sworn to serve, public corruption will remain a top priority for our office,” he said.

Seabrook, who had appeared to be in good spirits throughout the trial, sometimes invoking his trust in God with reporters, left the courtroom and — ever a politician — shook hands with Berman, congratulating him on his recent promotion.

“Look, I’m innocent,” he said later. He noted de Blasio himself had called Rechnitz a liar. “I feel disappointed, especially knowing that I did nothing wrong,” he said.

“There will definitely be an appeal,” Shechtman said. “Mr. Seabrook has fought these charges for two years and I don’t expect him to stop fighting now.”