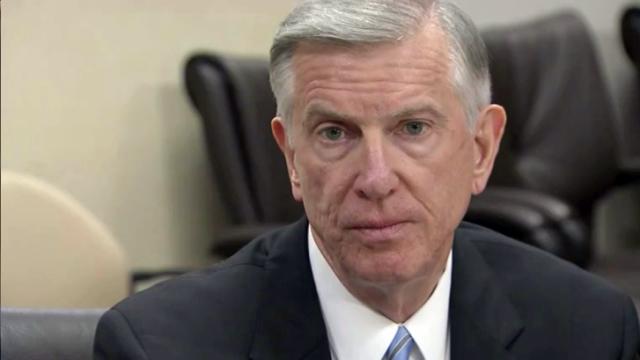 Durham, N.C. — Four weeks after being forced out as the president of the University of North Carolina system, Tom Ross has been named to a fellowship at Duke University’s Sanford School of Public Policy.

As the inaugural Terry Sanford Distinguished Fellow, Ross will focus on a variety of policy issues and will work with POLIS, Duke’s new Center for Politics, Leadership, Innovation and Service, to launch a bipartisan project aimed at improving how political district lines are drawn in the United States.

"Tom is one of our state’s most respected academic and civic leaders, and he is the perfect person to lead a project on districting processes across the nation," Frederick “Fritz” Mayer, associate dean at Sanford and director of POLIS, said in a statement. "We are excited to be working with Tom on this important issue."

Ross also will deliver a public Terry Sanford Distinguished Lecture and consult with faculty and students. His fellowship starts Monday and will continue at least through the spring semester, officials said.

"I am delighted to have the opportunity to work on important policy issues with the outstanding faculty, staff and students at the Sanford School," Ross said in a statement. "It is particularly meaningful to me to serve as the first Sanford Distinguished Fellow and to be associated with such a great university."

The Terry Sanford Fellowship and Terry Sanford Distinguished Lecture were created to facilitate visits to Duke by "men and women of the highest personal and professional stature" and are endowed by the William R. Kenan Jr. Charitable Trust.

Ross headed the 17-campus UNC system from January 2011 until the Republican majority on the UNC Board of Governors forced him to step down at the start of this year. Margaret Spellings, who served as education secretary under former President George W. Bush, has been named to succeed Ross at UNC.

Ross remains a tenured faculty member at UNC-Chapel Hill and plans to return to the School of Government there after a one-year sabbatical, officials said.