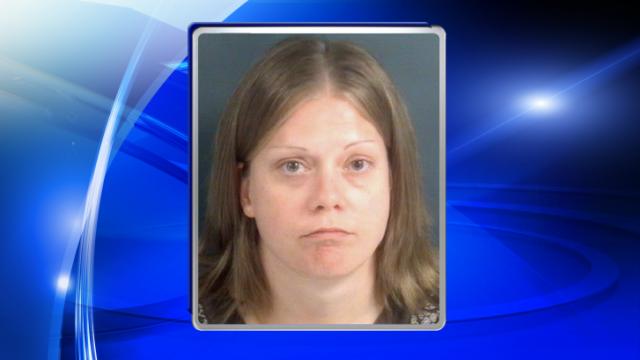 Fayetteville, N.C. — Cumberland County authorities arrested a former elementary teacher Tuesday night after she allegedly switched out medication prescribed to an 11-year-old child she had been babysitting.

Stacey Rademacher Kolmodin, 31, of the 5800 block of Rockfish Roads, Hope Mill was charged with one count each of misdemeanor child abuse, misdemeanor larceny, trafficking opiates and creating a counterfeit controlled substance.

Investigators said Kolmodin took Tylenol with codeine liquid out of a prescription bottle and replaced it with a liquid that was a similar color.

The child, who the Cumberland County Sheriff's Office said suffers from numerous medical illnesses, had to go to a local hospital after having an allergic reaction to what authorities called "the counterfeit medication."

Kolmodin was a first-grade teacher at Glendale Acres Elementary School until April, when she was arrested on drug charges after a school official discovered her allegedly snorting a "powdery substance up her nose" at her desk, the sheriff's office said.

Investigators said she also has a history of illegal drug activity that includes "doctor-shopping" to get prescriptions for Percocet.

In addition to the latest charges, Kolmodin was previously charged with four counts of felony trafficking opiates and two counts of obtaining a controlled substance by prescription misrepresentation.

She was in the Cumberland County Detention Center under a $31,000 secured bond Wednesday morning.