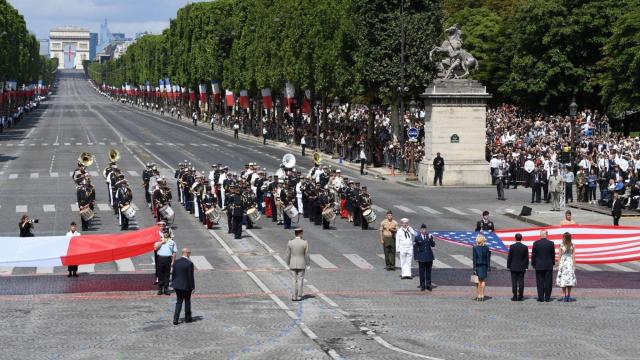 (CNN) — The former Navy SEAL who claims he fired the shot that killed Osama bin Laden is blasting President Donald Trump's desire for a military parade down Pennsylvania Avenue.

"A military parade is third world b-------. We prepare. We deter. We fight. Stop this conversation," Robert O'Neill tweeted Thursday.

'Neill was part of the military operation ordered by President Barack Obama that killed the al Qaeda leader in 2011. He also has been a guest host on a favorite morning show of Trump's, "Fox & Friends," and dined with the President at the White House last year.

Reports surfaced Tuesday that Trump asked the Pentagon for a parade that would rival France's Bastille Day celebration that he attended last year. Defense Secretary James Mattis said Wednesday that the Pentagon is preparing options for a possible military parade to send to the White House for a decision.

O'Neill's is just one voice in a chorus of concerns and criticism from veterans, former military leaders and lawmakers about the proposed parade. Some are uneasy over potentially high costs, while others question Trump's motives and argue that such a parade calls to mind displays of military power by authoritarian regimes such as North Korea or Russia.

The last major military parade held in the United States was in 1991 under President George HW Bush to celebrate victory in the Gulf War.