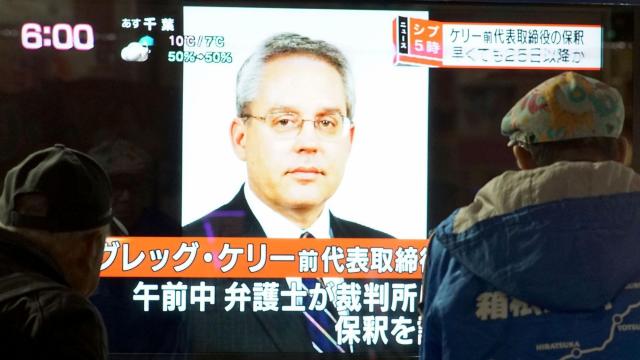 (CNN) — Greg Kelly, the US businessman accused of helping Carlos Ghosn under-report his income at Nissan, has been released from jail in Japan after being granted bail.

The Tokyo District Court set bail at 70 million yen ($635,000) for Kelly, who has been in detention since his arrest on November 19. An appeal by prosecutors was rejected and Kelly was released late Tuesday night in Japan.

Kelly did not have a comment on his release, according to his lawyers.

Kelly and Ghosn were indicted two weeks ago on allegations they collaborated to under-report Ghosn's compensation in Nissan's securities filings by about 5 billion yen ($45 million) over a five-year period ending in March 2015, according to prosecutors.

The accusations have rocked Nissan (NSANY), one of the world's top automakers, and strained its longstanding alliance with France's Renault (RNSDF).

Kelly denies any wrongdoing. His wife said he had been wrongly accused as part of a power grab by Nissan executives targeting Ghosn — an allegation Nissan disputes.

Ghosn also maintains his innocence, according to his Tokyo-based lawyer.

Nissan's board last month removed Ghosn as chairman and Kelly from his position as representative director.

Kelly's wife, Donna Kelly, said in a video statement last week that her husband was due to have surgery in early December for a spinal problem before a Nissan executive persuaded him to fly from his home in Tennessee to Tokyo for a board meeting.

When Kelly — who usually participated in board meetings by phone from the US — arrived in Tokyo, he was arrested. His wife said the back problem, known as spinal stenosis, has worsened during his weeks in jail.

Prosecutors rearrested Kelly and Ghosn two weeks ago on additional allegations of under-reporting Ghosn's income between 2015 and 2017, prolonging their detention. But last week, a court rejected a request from prosecutors to continue detaining the two men on those allegations, paving the way for them to apply for bail.

Ghosn's hopes of getting released anytime soon were quickly dashed when prosecutors arrested him on a new allegation of breach of trust. On Sunday, a court authorized extending his detention to January 1.

Kelly wasn't rearrested on the breach of trust allegation.

The maximum punishment in Japan for filing a false financial statement — the charge on which Kelly and Ghosn have been indicted — is up to 10 years in prison and a fine of up to 10 million yen ($91,000).