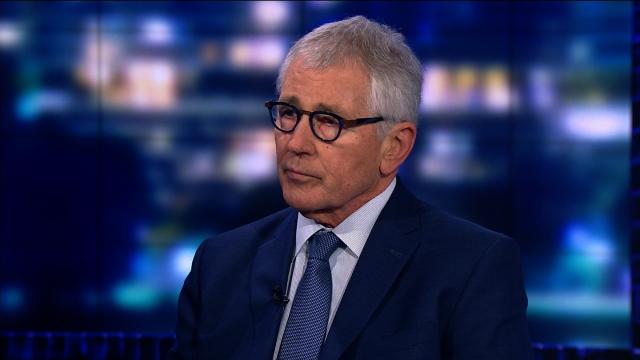 "This is folly. This is political distraction of the highest magnitude," Hagel told CNN's Jake Tapper on "Erin Burnett OutFront."

Hagel lambasted Trump's decision "taking thousands of American troops who are trained on the cutting edge all the time, and sending them down to a border where there is no need, no threat to an invasion of the hordes coming in from Latin America, which is a joke."

Hagel also cited the restrictions on military personnel at the border.

"They are of limited utility anyway because of the constitutional issues involved here as to what our active military can and cannot do," he added.

Federal law forbids "direct participation by a member of the Army, Navy, Air Force or Marine Corps in a search, seizure, arrest or other similar activity unless participation in such activity by such member is otherwise authorized by law."

Trump is "using our military and our troops in a very political way that ... really casts a lot questions about the competency of his leadership," Hagel said, adding that his own military service during the Vietnam War familiarized him with the hardship of the armed services.

"I know the kinds of sacrifices these men and women are involved with every day, and their families," Hagel said. "To use them as political pawns like this for a complete fabrication is really wrong."

Tapper also asked Hagel his thoughts on Trump's message to troops headed to the border that if migrants throw rocks at them, to "consider it a rifle."

"That's a wanton incitement of unnecessary violence," Hagel said. "It's a distraction, it's a distortion, it is of rank political purpose to use our military like this."

"Not in my lifetime have I ever heard those kinds of words from a president of the United States," he added.