Even with coronavirus vaccine distribution set to increase, upcoming months could be rough 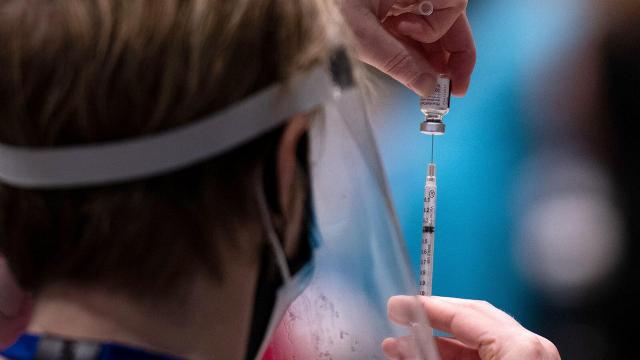 CNN — As the federal government promises more help against the coronavirus pandemic with better distribution of vaccines, the President is joining the chorus of officials reminding Americans they need to continue to wear face coverings and social distance for the rest of winter and spring.

"The brutal truth is it's going to take months before we can get the majority of Americans vaccinated. Months. In the next few months, masks, not vaccines, are the best defense against Covid-19," President Joe Biden said Tuesday while announcing the federal government would buy and distribute more vaccine doses from Moderna and Pfizer.

Biden has pushed for 100 million vaccination shots in the first 100 days of his presidency and for Americans to wear masks for that time.

People are wrong to think the worst days of the pandemic are behind them, CNN Chief Medical Correspondent Dr. Sanjay Gupta said.

"I think people, with all the talk about vaccines, you know, have started to look at this more in the rearview mirror," Gupta said. "The percentage of people that think the worst is behind us and in front of us is half and half. Half the country thinks the worst is behind us (but) some of the worst days may be in front depending on the (coronavirus) variants."

Health officials are "extremely" worried about the new coronavirus variants that have been detected in the United States and what they could mean over the coming months, one expert said.

"We've seen what happens in other countries that have actually had coronavirus under relatively good control, then these variants took over and they had explosive spread of the virus, and then overwhelmed hospitals," emergency physician Dr. Leana Wen told CNN's Anderson Cooper on Monday.

Some countries are struggling with an increase in new cases. The number of cases worldwide since the pandemic began topped 100 million Tuesday. More than a quarter of those cases have been reported in the United States.

How the new variants spread is a concern for health experts. Officials in Minnesota announced Monday they detected the P.1 variant of the virus in a traveler from Brazil. The variant is one of four being closely watched by the Centers for Disease Control and Prevention and appears to be more easily transmissible. CDC officials have also said another variant -- called B.1.1.7 and first spotted in the United Kingdom -- has been detected in more than 20 states.

While the United States seems to be heading in the right direction on infection rates -- with a vast majority of states reporting downward trends -- that progress could be erased if variants take hold, Wen said. Preventing that will mean extra vigilance.

"If there is something more contagious among us, if we thought that going to the grocery store before was relatively safe, there's actually a higher likelihood of contracting coronavirus through those everyday activities," she said.

"Wearing an even better mask, reducing the number of times that we have to go out shopping, or in indoor crowded settings, all of that will be helpful," Wen added.

Send us your questions for President Biden's Covid-19 team

6% of the US population has gotten a Covid-19 shot

So far, nearly 20 million people -- about 6% of the US population -- have received at least the first dose of the Covid-19 vaccine, according to CDC data. Nearly 3.5 million are fully vaccinated.

The numbers are a far cry from where some officials hoped the United States would be by now, but Biden said Monday he is hopeful the country could soon be administering 1.5 million vaccines daily. That's about a 50% faster pace than the goal of a million doses per day that he's promised since before inauguration.

Biden said he hopes to have most Americans vaccinated by late summer or early fall.

States will get a three-week notice of how many doses to expect, he said.

"I think the three-week forecast will make the biggest difference," said Dr. Ashish Jha, dean of the School of Public Health at Brown University. "When I have been talking to state officials, they get basically no forecast whatsoever. ... (A) three-week forecast will make it much, much easier for states to make sure that they have places staffed and ready to go and give people vaccines."

Across the country, health leaders and state officials have been working to enhance their vaccination strategies and boost the number of shots going into arms.

"We're definitely prepared and want to play a large role in helping to get the vaccine out there," he added. "Our internal goal is to have a capacity to perform 25 million shots a month or more."

California is switching to a third-party system instead of counties and hospitals running their own vaccination deliveries, officials said.

Officials from the state's health and human services agency and government operations agency said the new system will simplify eligibility, standardize information and data, and address the available supply of doses by streamlining the vaccination process.

West Virginia Gov. Jim Justice debuted a new online pre-registration system Monday, which allows residents to pre-register to receive a vaccine. Since the system's launch Monday morning, more than 32,000 residents had scheduled a vaccine appointment, the governor said. That will work alongside an existing hotline that residents can call to pre-register.

Illinois announced it was entering its next stage of vaccinations Monday, opening guidelines to people 65 and older and frontline essential workers including teachers, first responders and grocery workers. The governor added as more doses become available, more mass vaccination sites will open up.

Chicago will target 15 "high-need communities based on the City's COVID vulnerability index," the mayor's office said in a news release. The initiative will include "strike teams" that will reach "those who may be disconnected from more traditional vaccine administration channels," it said.

"Our city is two-thirds people of color," Mayor Lori Lightfoot said in a news briefing. "Yet we are falling woefully behind in the number of people of color who've been vaccinated today."

Lightfoot said that of the nearly 108,000 residents who have received their first vaccine dose, only 17% are Latino and about 15% are Black.

Minimal Covid-19 spread is possible at schools with the right precautions, study says

Students in K-12 schools can go back to classrooms with the right mitigation strategies, according to a study published Tuesday in the CDC's Morbidity and Mortality Weekly Report.

The study looked at more than 5,500 students and staff members at 17 schools in Wood County, Wisconsin.

Staff were told to wear masks, social distance and limit time in shared indoor spaces. If a student was out of school with Covid-19 symptoms, their siblings also were told to stay home.

Each student was provided with three to five double- or triple-layered cloth masks. Masks were required in schools and statewide, and more than 92% of students of all age groups wore them.

A total of 191 people tested positive for the coronavirus. The researchers found that Covid-19 case rates in schools were 37% lower than in the surrounding community.

Contact tracing and investigation determined that seven of those 191 cases were contracted in school. Three of the seven students who tested positive were from one elementary school class.

Moderna says its vaccine protects against some variants

The good news, Fauci told CNN in a separate interview Monday, is that current Covid-19 vaccines are likely to be effective against the new variants.

Moderna said Monday its vaccine created antibodies that neutralized Covid-19 variants first found in the United Kingdom and South Africa. There are concerns the vaccine may have a somewhat decreased efficacy against the strain first spotted in South Africa, and the company is working on a booster shot aimed at fighting it.

But as Covid-19 evolves, it will be important to prove "time and time again" that vaccines provide protection against new strains, Moderna president Dr. Stephen Hoge said in a panel discussion Monday.

"Until we've got this thing sort of fully suppressed and in control, and people are broadly vaccinated or seropositive and protected against it, it's going to be an ongoing battle for the next couple of years," he said.

Meanwhile, Johnson & Johnson's vaccine is being tested in South Africa, the United States and Brazil, and those results could provide insight into how well it works against emerging variants, one of its developers said.

Johnson & Johnson told investors Tuesday it expects to share further details on its Phase 3 Covid-19 vaccine study results by early next week. Alex Gorsky, chief executive officer and chair of Johnson & Johnson's board of directors, said the company is "hopeful" efficacy and safety data from earlier trials is a "good precursor" to the kind of data in the larger population in its Phase 3 trial.