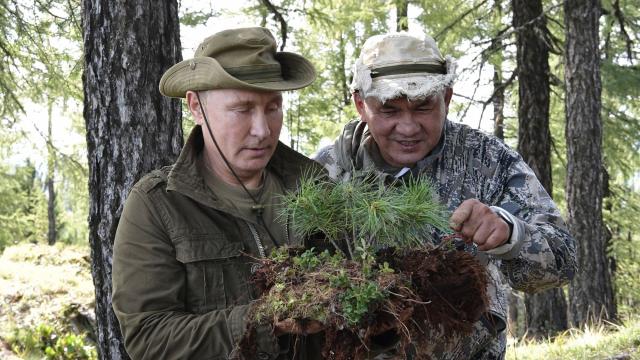 What is the best way to deal with dipping political ratings? If you are Russian President Vladimir Putin, it’s apparently to start a TV show featuring clips of you picking berries in the wilderness, staring at goats and being interviewed by teenagers.

On Sunday, Rossiya 1, a state television channel, aired the first episode of “Moscow. Kremlin. Putin.” — an hourlong show featuring highlights of the president’s recent travels around Russia, along with much studio discussion praising the president as a model of vigor and compassion.

In one segment he was shown picking and then eating berries.

“We should gather these and go to the collective farm market,” he said.

The show comes at a time of relative difficulty for Putin. Last month, he was forced to dilute a much-despised plan to save money on state pension by raising retirement ages. The plan has hurt his popularity, with his approval rating falling from around 80 percent to the mid-60s, its lowest level since he annexed Crimea in 2014, before rebounding to about 70 percent.

The show, which can be watched on YouTube, spent about a third of its running time on the pension changes, but largely to praise Putin for taking responsibility for making such difficult but necessary step now when he could have safely waited until the end of his term.

The Kremlin tracks the president’s ratings zealously, and if the past is any guide, Putin does best among supporters when he plays the “father of the nation” role. That seems to be the subplot in every sequence of the new show, including one about how he loves children.

In many ways, Sunday’s show was vintage Putin.

The Russian president has often been shown as an outdoorsman and in a heroic light. On past forays, he has tranquilized a tiger and appeared shirtless riding a horse in Siberia. He even seemed to quickly discover fragments of ancient Greek urns while scuba diving in the Black Sea. (It later turned out the discovery was staged.)

Sunday’s episode featured clips of Putin’s recent trip to the Tyva Republic in southern Siberia. He was seen hiking and taking a boat trip in which he looked at ibex — mountain goats — through binoculars. The show praised Putin’s physical fitness and his lack of fear of even the wildest of animals.

“Imagine, bears aren’t idiots,” Dmitry Peskov, Putin’s press secretary, a studio guest, said when asked if trips into the mountains were dangerous. “If they see Putin, they will behave properly.”

“Putin doesn’t only love children, he loves people in general,” he said. “He is a very humane person.”

The response to the show online has been scathing, at least among those who oppose Putin. On YouTube, the most liked comment mocks the show’s laudatory tone.

“Walking in the woods — it’s dangerous, but the tigers and bears behaved decently, they bowed and kissed Putin’s hands, expressed supportive words,” it reads.

The show is a “new genre of tele-icon-painting,” said Pavel Lobkov, a journalist, on TV Dozhd, an independent channel.

It was reminiscent of Leninist or Stalinist propaganda, journalist Dmitry Kolezev wrote in an opinion piece for Znak, a news website. But Kolezev did not think it would be as effective as past efforts.

“It is hard to imagine that in 2018, in the era of the internet, trolling and ubiquitous irony,” he said “even the most conservative part of the population will accept such narration at face value.”

Putin and his public relations people seemed to “continue to believe unconditionally in the magic of television,” Kolezev added.

Fans — and enemies — of the show do not have long to wait until the next episode. It will be shown this Sunday at 10 p.m.