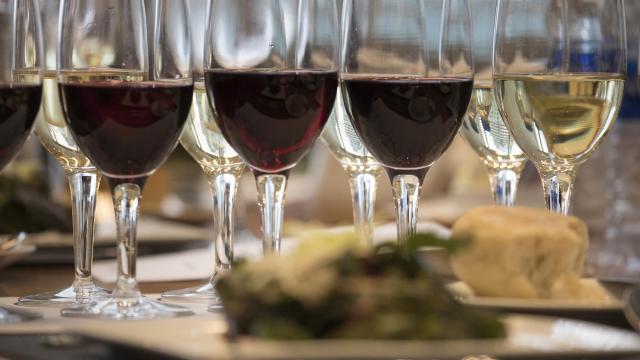 Somewhere in this great land on Thanksgiving Day, a guest on the corny side will arrive at the feast, grinning and bearing a bottle of Turkish wine.

“Turkey for the turkey,” he will say. The hosts will graciously accept the prize even as they groan inwardly. And yet, the jester might have it exactly right.

At the wine panel’s annual pre-Thanksgiving meal, where we test out wines to see what might go best with the turkey and sides, the guy who brought that wine was our tasting coordinator, Bernard Kirsch.

It was an $11 red, a 2017 Yakut from Kavaklidere, made largely of the little-known grapes okuzgozu and bogazkere, grown in the Eastern Anatolia and Aegean regions of Turkey. Bernie’s dad joke notwithstanding, the wine was excellent, dry and structured, with enough complexity in the flavors of myriad dried fruits to be interesting and refreshing.

Good Thanksgiving wines can come from anywhere, and anybody. They can be red or white, rosé or orange, sparkling or still. As widely as the wines might range, we have, in the panel’s many Thanksgiving run-throughs over the years, consolidated the characteristics that comprise the best Thanksgiving wines.

Here’s how our tasting works: Each member of the Thanksgiving panel — Florence Fabricant, Julia Moskin and Pete Wells, along with Bernie and me — brings two wines, a white and a red, each costing no more than $25.

We imagine an unruly feast, with lots of people, perhaps served buffet-style. For a big group, chances are nobody will want an exorbitant wine bill, hence our price cap.

If you are planning a sit-down Thanksgiving for six, by all means pick great, expensive wines, if you like. Offer a good Champagne to start, and follow with a fine white and a fine red. Use your most delicate glassware. Enjoy.

Our feast is festive, but maybe not so grand. We imagine, with a crowd, that stemware might not be an option. If not, glass tumblers are fine for these wines. If you must use plastic, beware the flimsy pretend stemware. The benefits are negligible and not worth the risk of spills. Opt for tumblers instead.

We emphasize that choosing wines for Thanksgiving is not an exercise in pairing. The meal — especially the sort of potluck buffet where guests bring all sorts of family favorites — is too complex and disparate to worry about precision matching.

Instead, we suggest picking versatile wines that go with many different sorts of flavors. And we are wary of wines that are more than 14 percent alcohol.

Some people argue that the alcohol level is meaningless, as long as the wine is balanced. I don’t buy that in general. But Thanksgiving in particular is a long, fatiguing journey, literally and figuratively: Many people travel over hills, dales and interstates to feast on the myriad filling dishes that cover the table. Don’t add to the languor with heavy, alcoholic wines.

We prefer wines that are nimble and energetic, that refresh the palate rather than enervate. Usually, these are wines with lively acidity, which snaps the mouth to attention and merges well with many flavors. While acidity is a friend, pronounced tannins, oakiness and unbalanced sweetness are not. Avoid them if possible. At Thanksgiving, no host would risk running out of food. The principle of Thanksgiving is plenty. The same is true of wine. Figure at minimum about one bottle per drinking guest. As with food, you will have leftovers. Give extra bottles as take-home gifts or keep them for yourself. But nobody will go wanting.

Have plenty of both white and red. As this is not an exercise in pairing, give guests a choice. Many people prefer one or the other, sometimes for reasons that may seem specious, but this is not the occasion to argue a point. It’s fine to add sparkling wine, rosé or another bottle to the mix as accents or extras. For a small gathering, you can serve these additional selections with courses as you see fit. But for a big group, red and white are the way to go.

As much wisdom as we have acquired over the years (by all means look up past columns for additional suggestions), our wine panel does not always adhere to it. My conjecture is that it’s no fun to bring the sure things: the Beaujolais and dry sauvignon blancs, the Loire reds and Italian whites, the barberas, Chiantis, pinot noirs and cabernet francs from the Finger Lakes.

The challenge is to add to the list. Julia succeeded admirably, at least with one of her wines, which turned out to be our top white. It was the 2016 Cuvée de O from Avancia, made from godello grapes grown in the Valdeorras region of Galicia, in northwestern Spain.

Godello is a grape that practically disappeared from Spain in the mid-20th century before it was resurrected, and this wine, with its texture, energy and touch of bitterness, showed why it’s now considered a rising star.

“It’s got great balance, and is perfect for people who like wines that aren’t fruity,” Julia said.

The grapes that make such wines are often described as “neutral,” not a word dreamed up in the marketing department. Yet these neutral wines, emphasizing texture and savory flavors over extravagant fruit, go beautifully at Thanksgiving. Another option to consider might be the chardonnays of the Mâconnais region of Burgundy.

Neutral would also describe our No. 2 white, the 2015 pinot blanc from the excellent Eyrie Vineyard in the Willamette Valley of Oregon. It’s a subtle, floral and mineral wine, which I brought and which Pete called “moody.”

Florence’s white, the 2017 Moulin de Gassac Guilhem Blanc from Mas de Daumas Gassac in the Languedoc, was actually a tried-and-true style, and it showed why. The wine, made about equally of sauvignon blanc, grenache blanc and clairette, was lively and pungent, and would be a crowd pleaser. At just $11 a bottle, it was also our best value among the whites.

No. 4, the 2015 Polarity from Heart & Hands in the Finger Lakes, was an oddball. Though made of pinot noir, it was vinified as a white, with the grape juice immediately whisked away from the pigment-bearing skins. The wine was still a bit pink, more rosé than white, and quite pleasant, if not memorable. Like a guest who tells you she is bringing Brussels sprouts but arrives with sweet potatoes instead, Julia brought a second white instead of a red. It was not her first offense. It was a demi-sec Vouvray, in which the wine is made with discernible sweetness, from Château de Montfort.

In theory, it should have been a great match, but this particular Vouvray was not an inspiring effort. “It’s excellent for people who don’t like wine,” Julia concluded.

That left Pete’s white, the Borealis from Montinore Estate in the Willamette Valley, a blend of Müller-Thurgau, gewürztraminer, riesling and pinot gris from multiple vintages. It seemed a bit heavy and unbalanced.

Pete said he was trying to demonstrate the utility of Alsatian-inspired wines, a point he made more successfully in 2014 when he brought an excellent gewürztraminer from Eminence Road, a good Finger Lakes producer. I should add that both pinot noirs and rieslings from Montinore have done well in previous Thanksgiving panels.

Among the reds, Bernie’s wine from Turkey was not only among our top choices but also our best value at $11. Bernie brought a second red, which we opened to compensate for Julia’s two whites. It also turned out to be one of our favorites, the 2014 Bebame from El Dorado County in the Sierra Foothills of California.

The wine was made mostly of cabernet franc, with some gamay thrown in, and was light-bodied and fresh, as might be expected from a project involving Steve Edmunds, who makes wonderful wines at Edmunds St. John.

No. 2 was my red, the lightly tannic, slightly funky, energetic 2016 Duc des Nauves from Château Le Puy in Bordeaux, a moderately priced cuvée from a committed biodynamic producer.

Our last two bottles were efforts by Florence and Pete to rehabilitate zinfandel as a go-to wine for Thanksgiving. It used to be highly recommended as the perfect all-American wine for this all-American holiday, and the impulse is not wrong. I have stepped away from recommending zinfandel, as most nowadays are too high in alcohol. Florence’s bottle, Cline’s 2015 Ancient Vines zinfandel from Contra Costa County, was bold and spicy, but also 15 percent alcohol.

Pete’s wine, the 2016 People’s Zin from the People’s Wine Co., was soft, jammy and a trifle sweet, with some spicy, licorice flavor. I don’t know what the alcohol level was, but it seemed lower than the Cline.

“Zin’s time will return,” he said. He was equally drawn, he added, by the wine’s red-white-and-blue label, and the fact that it donates a portion of its proceeds to nonprofit organizations like Farmworker Justice and Coalition for the Homeless.

That’s not such a bad way to give thanks.

Well-balanced, with subtle aromas and flavors of flowers and pears, and an underlying minerality.

Made of pinot noir, and more rosé than white, it is pleasant, with light mineral and herbal notes.

Straightforward — though a bit weighty and a touch sweet — with floral, citrus and clove flavors.

Bright and juicy yet well structured, with flavors of dried fruits. Made of the bogazkere and okuzgozu grapes. (The House of Burgundy, New York)

Soft and jammy, with lightly sweet flavors of baked fruits.

Bold, spicy and sweetly fruity, with a touch of heat.

Thanksgiving is the ultimate potluck moment. As we contemplated reasonably priced wines to serve with the holiday feast, I thought about something savory, appetite-whetting and not particularly filling to nibble with the drinks before everyone’s plates are loaded. I turned to “Potluck: Food and Drinks to Share With Friends and Family,” by the staff of Food & Wine magazine (Oxmoor House, $29.99). A recipe for drop biscuits, inspired by the Mexican street food elote, caught my eye. I amplified the heat of the recipe with chipotle powder, and instead of making full-size biscuits, I baked single bites. The drop biscuits can be made in advance or eaten soon after they leave the oven. Planners, take note: They freeze beautifully. Present them in a shallow basket lined with corn husks or a cloth napkin. A dip alongside? Stir a shot of lime juice and some minced cilantro into a cup of sour cream.

1. Line a baking sheet with parchment paper. Place the flour, baking powder, salt and chile powder in a food processor or in a large bowl. Pulse machine or mix by hand. Drop in the butter and pulse, or work in with your fingers until the butter is incorporated in tiny pea-size pieces. If using food processor, transfer this mixture to a bowl.

2. Add the cheese, corn, cilantro and lime zest. Mix with a large fork. Add the cream and stir until a soft, somewhat sticky dough forms. Line a baking sheet with parchment. Break off pieces of the dough and form into balls 1 inch or so in diameter. Place on the baking sheet an inch apart. Refrigerate for 30 minutes.

3. Heat oven to 350 degrees. Bake 25 minutes, until golden. Place baking sheet on a rack, cool about 30 minutes and serve. Biscuits can also be frozen, thawed at room temperature and warmed for 15 minutes at 250 degrees before serving.