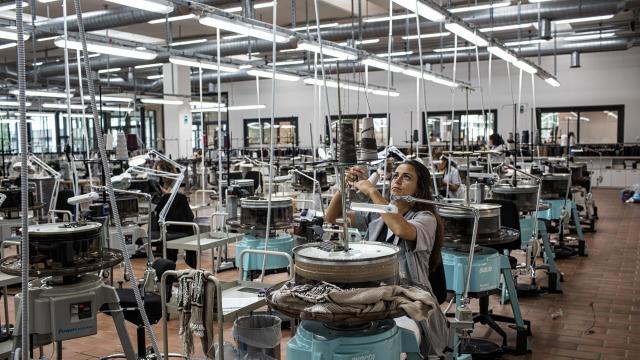 FRANKFURT, Germany — Economic growth in the eurozone has fallen to its slowest pace in more than four years, and Italy is not growing at all, according to figures released Tuesday. The snapshot is likely to sharpen political divisions in the European Union and make the region more vulnerable to the forces rattling financial markets.

The eurozone grew 0.2 percent from July through September compared with the previous quarter, according to the EU statistics agency. Separately, Italy’s government statistics office said growth during the third quarter was zero as manufacturing slumped.

Both numbers were unexpectedly poor. Eurozone growth in the quarter was only half as fast as it had been in the previous three-month period, and the rate of growth has fallen each of the last three quarters.

Italy’s stagnation is likely to heighten the dispute between the populist government in Rome and officials in Brussels. The European Commission has said that Italy’s proposed budget — full of debt-financed welfare programs — flouts spending limits that countries in the EU are supposed to observe.

One of the European Commission’s criticisms of the Italian budget is that it was based on overly optimistic estimates of future economic growth. Now those estimates look even less realistic.

Investors registered their disappointment by bidding up the market interest rate on Italian government bonds on Tuesday. That will only amplify the country’s problems.

The rates on government bonds serve as bench marks for the rates that Italians pay on business or consumer loans. Higher rates will squeeze spending and lead to yet slower growth.

“It’s a self-defeating cycle,” said Lorenzo Codogno, chief economist at LC Macro Advisors in London. “The government is shooting itself in the foot.”

But Codogno said he doubted that the populist parties governing Italy would retreat from their campaign promises, such as increases in pensions. To do so, he said, “would be political suicide.”

And Italy is not the only country in the eurozone facing political instability.

Germany is facing a difficult transition after Angela Merkel, the chancellor for 13 years, said on Monday that she would give up leadership of her conservative party in December and not seek re-election in 2021. The surprise announcement came after elections in the state of Hesse underlined a migration of voters from centrist parties to parties on the far left and far right.

The eurozone growth figure published Tuesday was a first estimate and contained no detail about what sectors led to the slowdown. Still, the causes are obvious enough.

They include the prospect that Britain’s separation from the EU will be disruptive; a trade war with the United States that has interfered with trans-Atlantic commerce; and rising interest rates as central banks roll back the stimulus programs they used to combat the last financial crisis.

Those risks are accumulating at the same time that financial markets are unusually nervous. Daily fluctuations in the prices of stocks, bonds, currencies and commodities like gold and copper are at their most extreme levels since 2008, when the last global financial crisis began, according to data compiled by analysts at the German bank Berenberg.

The one somewhat bright spot in the numbers Tuesday was France, which registered growth of 0.4 percent from the previous quarter. But, coming after two weaker quarters, even that above-average result was not enough to achieve the 1.7 percent pace of expansion that economists say President Emmanuel Macron needs to validate his program of business-friendly reforms.

The changes have not yet brought widespread economic gains or job creation, damaging Macron’s popularity with voters. The government needs the economy to expand by around 1.7 percent in each of the next four years if it is to maintain a pledge to cut unemployment to 7 percent, from more than 9 percent today, by the next presidential election, economists say.

The disappointing growth in the eurozone as a whole was partly caused by factors that are not likely to repeat, leaving room for hope that growth will pick up toward the end of the year.

For example, European car sales slumped 24 percent in September as auto manufacturers struggled to comply with new, stricter emissions standards. Cars were slow to reach dealers because of delays in getting regulators to certify vehicles for sale. Manufacturers such as BMW and Daimler have also been caught in the crossfire of President Donald Trump’s trade war with China.

The slowdown in the car industry rippled through the eurozone and was probably most pronounced in Germany, the Continent’s largest economy and motor of growth. Registrations of new Volkswagens slumped by nearly half in September, according to the European Automobile Manufacturers Association. The company at least temporarily lost its long-held status as the Continent’s largest auto manufacturer to PSA of France, the maker of Peugeot and Citroën cars.

The brake on growth caused by the auto industry should dissipate soon, “and the euro economy is likely to grow more strongly again,” Christoph Weil, an economist at Commerzbank in Frankfurt, said in a note to clients Tuesday. But many other risks will remain, particularly Italy and a government seen by investors as reckless and determined to defy Brussels. The ultimate question facing the eurozone, and the world for that matter, is whether the problems of Italy and the tremors in financial markets signal another crisis.

Bernd Meyer, chief strategist for wealth and asset management at Berenberg, pointed out that prices for tech stocks or real estate were not at the extreme levels that preceded past meltdowns.

During a meeting with reporters Tuesday, Meyer argued that market pressure on Italy will eventually force the government to relent on its spending plans. But, he added, “they will only back down when they are staring into the abyss.”

Others are less sanguine about the eurozone’s prospects. Nicola Nobile, lead economist at Oxford Economics, a consulting firm, noted that the European Commission’s survey of economic sentiment also slipped Tuesday, though it remains well above crisis levels.

“Recent surveys,” Nobile said in a note to clients, “are painting a rather bleak picture of eurozone growth.”