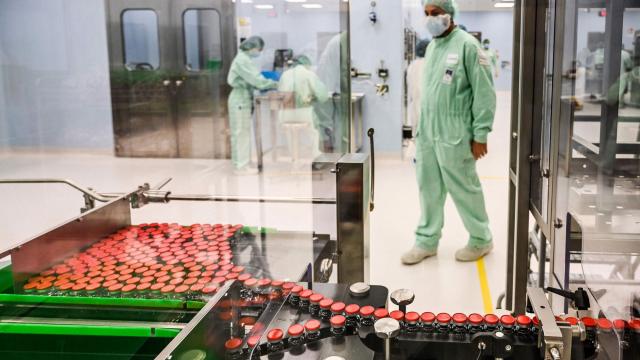 CNN — The European Union's medicines regulator on Friday recommended authorizing the Oxford-AstraZeneca Covid-19 vaccine for use among its 27 member states, capping off a turbulent week which saw the bloc attack the drugmaker over delays to supply.

The long-awaited decision from the European Medicines Agency came after several EU countries warned they were running out of vaccine doses, and as coronavirus deaths pile up across the continent.

For the past week, the EU and AstraZeneca have been locked in an acrimonious dispute over vaccine supplies. A week ago, the British-Swedish pharmaceutical giant said it would not be able to deliver as many doses as the European Union expected -- upending the bloc's vaccination plans.

The European Commission -- which ordered 400 million AstraZeneca doses on behalf of EU member states and is poised to start rolling the first ones out across the bloc -- said the delay was unacceptable, and the drugmaker must find a way to increase supply.

The EMA's authorization came a day after the German vaccine commission said it would not recommend the AstraZeneca vaccine for people aged 65 or over, citing insufficient data. The move further complicated distribution plans in Europe's largest economy.

In response, an AstraZeneca spokesperson said the latest analyses of clinical trial data "support efficacy in the over 65 years age group."

The dispute between Europe and AstraZeneca is playing out against a dire backdrop. EU countries including Germany were already running low on vaccines even before the AstraZeneca vaccine was authorized Friday. The US drugmaker Pfizer had previously slowed EU deliveries of the vaccine it developed with BioNTech while a manufacturing facility was upgraded.

In Spain, the regional government of Madrid stopped administering first doses of the vaccine on Wednesday for the next two weeks to ensure there is enough to provide second doses for those who already got their first shots.

Concerns over expected shortages of the Moderna and Pfizer/BioNTech vaccines means some French regions, including Paris, will push back or cancel appointments for first injections, the French health Ministry said in a press statement on Thursday.

The death toll from Covid-19 is mounting, and the slow rollout of shots across the bloc is threatening a very fragile economic recovery from the pandemic. This week only 2 out of 100 people received jabs in the EU, compared to 7 out of 100 people in the US and 11 out of 100 in the UK, according to figures from Our World in Data.

Earlier this week, AstraZeneca CEO Pascal Soriot told Italy's la Repubblica that at least three million doses would be shipped to Europe as soon as the vaccine was authorized, and that the goal was to deliver 17 million total doses by the end of February.

As the dispute continued to play out Friday, the European Commission published on its website the redacted contract signed with AstraZeneca for the purchase of its vaccine for all the EU member states.

The EU had asked AstraZeneca to publish the contract, signed on August 27, following the company's announcement of delays. The details of the vaccine delivery schedule have been redacted from the published document.

The United Kingdom, whose regulator approved the Oxford/AstraZeneca vaccine on December 30, has been administering doses to people older than 65 for nearly a month.

In its report, UK regulator MHRA said there was "limited information available on efficacy in participants aged 65 or over, although there is nothing to suggest lack of protection."