Specter of Car Tariffs Forces Allies to Give Ground in Talks 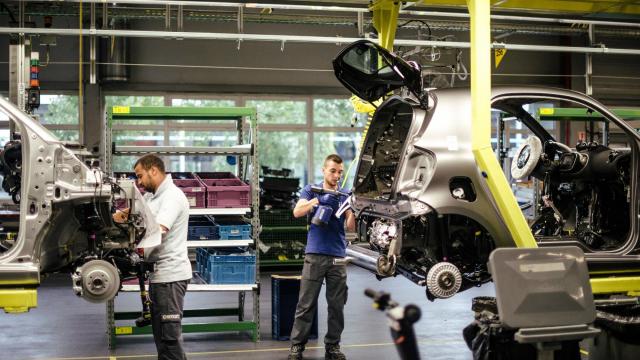 FRANKFURT, Germany — President Donald Trump’s threat to impose tariffs on imported cars is working, sending foreign leaders from Mexico to Japan racing to the negotiating table to make deals. But their offers may not satisfy a president who has shown a willingness to embrace trade tensions in an effort to extract more from American trading partners.

The European Union on Thursday made one of the most significant concessions, saying it would cut its existing penalties on automobiles to zero, provided the United States dropped its own tariffs. Although the president has called for something similar, Trump said he wanted Europe to go even further.

“It’s not good enough,” Trump said in an interview with Bloomberg News. “Their consumer habits are to buy their cars, not to buy our cars.”

If deals do not get done, the president’s combative approach to trade is risky, leaving U.S. companies vulnerable to both tariffs in the United States and retaliatory measures by other countries. Car manufacturers like General Motors and Ford depend heavily on a global supply chain. Tariffs could raise sticker prices and cost jobs.

But the cudgel, 25 percent levies on foreign-made cars, is a powerful one. Compared with the measures on steel and aluminum, they have the potential to do significant damage to a big, global industry that helps drive many economies.

Trump is betting that the United States has a stronger position that will force trading partners to blink. Europe is facing a slowdown, while the U.S. economy is surging ahead.

Against that backdrop, the European Union’s top trade official said Thursday that the bloc would be willing to remove all tariffs on cars and other industrial products as part of a limited trade deal with the United States, if America did the same. Europe had previously expressed a willingness to eliminate tariffs on industrial goods, but excluded cars, and said any deal had to be part of a broad free-trade agreement.

“We would do it, if they do it,” Cecilia Malmstrom, the European commissioner for trade, told members of the European Parliament on Thursday. “That remains to be seen.”

Trump could be angling for an offer that would more directly reduce the United States’ trade deficits. Although economists have criticized his use of the measure as a scorecard for trade, he has often criticized the EU for selling more goods, especially cars, to the U.S. than it purchases. In the interview with Bloomberg News, Trump likened the EU to China, which also runs a trade surplus with the United States.

Mexico, too, has been willing to deal. On Monday, the Mexican government agreed to effectively cap exports of cars, sport utility vehicles and auto parts into the United States, subjecting any exports above those levels to Trump’s tariffs if they go into effect.

Mexico, Canada and the EU initially insisted that they would not negotiate about trade “with a gun to the head.” But existing tariffs on steel and aluminum, and the specter of tariffs on automobiles, helped change their minds.

“The European Union’s original position was that they would not negotiate with the United States about anything to do with trade policy until the U.S. removed those tariffs,” said Joanna Konings, a senior economist at the Dutch bank ING who specializes in trade.

In the North American Free Trade Agreement negotiation, the tariffs — existing and threatened — have given officials another thorny issue to resolve. Trump said on Monday that he had struck a deal with Mexico, while threatening to leave Canada behind and hit it with auto tariffs.

“I think with Canada, frankly, the easiest thing we can do is to tariff their cars coming in,” Trump said.

Canadian officials responded by cutting short a trip to Europe and rushing to Washington, where they are working to reach an agreement.

Car companies, already paying higher prices for steel and aluminum, have been universally opposed to the prospect of further tariffs on cars and car parts. They argue that the measure would disrupt global supply chains and damage their ability to compete in foreign markets. Auto tariffs could affect roughly $350 billion worth of foreign automobiles and auto parts, more than three times the value of the foreign products currently subject to import taxes. The measure would fall heavily on U.S. allies: Roughly 98 percent of U.S. car imports come from the European Union, Canada, Mexico, Japan and South Korea.

U.S. carmakers would also suffer. They are among the biggest importers of foreign components. U.S.-made substitute parts will most likely be in short supply, if they are available at all, driving up costs.

General Motors has warned that Trump’s plan could increase vehicle prices by thousands of dollars and force the auto giant to shrink its operations.

Wielding the auto tariffs as a threat may also undermine the administration’s rationale for imposing the levies. The administration argues that imported automobiles threaten U.S. national security because they are degrading the industry. But critics say the argument rings hollow if those tariffs can be lifted for other concessions.

Still, the president appears convinced that the strategy is working. At a rally in West Virginia last week, he recounted how the threat of auto tariffs had brought the Europeans to the negotiating table.

“We’re going to put a 25 percent tax on every car that comes from the European Union into the United States,” the president said.

“That’ll take one little signature, Donald J. Trump,” he added. “And I got a call. Mr. President, when can we meet? We’d like to see you. And they came in very respectfully; we’re working on a deal.”

Europe’s willingness to compromise reflected the danger car tariffs pose, in particular to Germany, the Continent’s largest economy and a major automotive exporter.

In July, Jean-Claude Juncker, the president of the European Commission, the EU’s executive arm, struck a deal with Trump that called for talks on a broad deal, while postponing tariffs on cars. Europe and the United States also agreed to work on reform of the World Trade Organization.

On Thursday, Trump again threatened to pull out of the WTO if it does not “shape up,” saying the international body has not treated the United States fairly.

“If they don’t shape up, I would withdraw from the WTO,” Trump said in the interview with Bloomberg News.

Some analysts interpreted the agreement between Juncker and Trump as an attempt to reopen talks on a comprehensive free-trade deal, which stalled in the closing days of the Obama administration and died after Trump’s election.

But Malmstrom’s comments on Thursday signaled that the European Commission was willing to pursue a less ambitious pact in order to avoid further escalation of the trade war.

“We are not restarting TTIP,” she said, referring to the Trans-Atlantic Trade and Investment Partnership, the pact that foundered.

In Japan, the threat of auto tariffs is causing more severe anxieties.

Japanese government officials continue to resist the administration’s invitation to enter bilateral trade talks or offer any concessions. But Japanese auto industry leaders are increasingly concerned about the fate of the 1.7 million cars Japan exports to the United States annually. Analysts say that if the administration imposes a 20 percent tariff on Japanese auto exports, manufacturers’ costs could go up by $8.6 billion. SMBC Nikko Securities estimated that if automakers passed on such costs to customers, Japan’s car exports would decline by 200,000 units, cutting profits by about 2.2 percent.

When Prime Minister Shinzo Abe visited Trump at his Mar-a-Lago resort in Florida in April, he politely but firmly declined the president’s suggestion of a one-on-one trade pact, saying that Japan would prefer the United States to re-enter the broad deal among 11 countries known as the Trans-Pacific Partnership. Trump withdrew the United States from the partnership his first week in office.

After visiting Washington earlier this month to speak with Robert E. Lighthizer, the U.S. trade representative, Japan’s minister of economic revitalization, Toshimitsu Motegi, told Japanese reporters in Washington that “the discussions will continue, and there are individual areas to be discussed further.”

In South Korea, the threat of auto tariffs has also shaken a trade pact that it recently entered into with the United States. In March, the Trump administration announced that it had reached a deal with South Korea to revise its existing trade deal, which Trump had often criticized.

As part of that pact, South Korea agreed to give U.S. carmakers more access, while the United States was able to extend a tariff that it charges on foreign trucks. But those pledges have been thrown into question by the threat of new measures on Korean automakers. The deal has not yet been authorized by South Korean lawmakers. South Korea thought it had put trade tensions with the United States behind it with the conclusion of its agreement, said Troy Stangarone, senior director of trade at the Korea Economic Institute.

“That hasn’t turned out to be the case,” Stangarone said.