Essential tremor - the movement disorder people aren't talking about, but should be 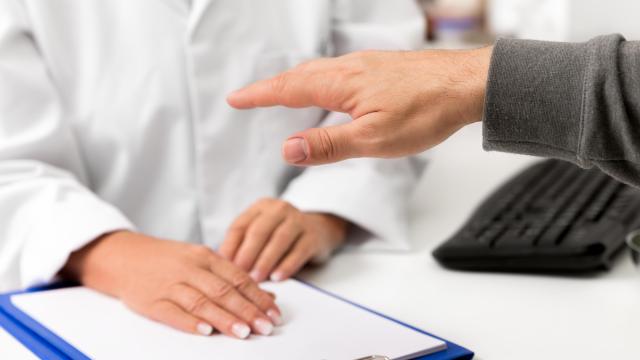 This article was written for our sponsor, Essential Tremor Products.

Imagine trying to do simple tasks like buttoning a shirt, stirring a cup of coffee or brushing your teeth, but being unable to do so with ease, if at all.

For many of us, these are functions we perform daily without a second thought, but for 10 million Americans suffering from essential tremor — these are habitual hurdles to overcome.

Essential tremor is a neurological disease that causes tremors or shaking in different parts of the body, usually in the hands. The tremor is typically triggered when an individual attempts voluntary movements like pouring a drink or tying a shoelace.

ET, which is often mischaracterized as Parkinson's Disease — a similar neurological condition that results in rhythmic shaking — can make eating, dressing, bathing, writing and other tasks challenging. Recently, breakthrough research has also revealed that ET can be linked to emotional and cognitive symptoms as well.

Symptoms of ET may include, but are not limited to:

ET is often differentiated from Parkinson's Disease due to the nature of the tremor. ET patients typically experience tremors when using their hands while Parkinson Disease patients have visible tremors even when their hands are in a resting state. Additionally, those with Parkinson Disease have been known to also experience a shuffling gait and stooped posture, while ET isn't usually associated with other physically presenting health issues.

In addition to the tremor, which is the main symptom, other symptoms, such as cognitive issues and emotional disruptions, have been linked to ET, according to Dr. Karen Sullivan, a board certified neuropsychologist.

Sullivan is the owner of Pinehurst Neuropsychology and creator of I CARE FOR YOUR BRAIN, a program "founded on the belief that successful cognitive aging is more than just brain health" and is rooted in other physiological and social factors as well.

"ET was thought of as just a movement disorder for a long time, meaning it was really just one symptom — that people had a tremor," Sullivan said. "Within recent years, we're finally acknowledging that this is a very heterogeneous neurological disorder. It is not mono-symptomatic as we thought, meaning it is not simply an action tremor. Of course, the involuntary and rhythmic shaking that goes on along with essential tremor is a primary symptom, but that's not all there is to it."

She added, "It can absolutely affect people all over the body. Additionally, the part of the brain linked to ET, the cerebellum, also impacts other things, like cognitive and emotional functions."

Researchers have traced the origin of ET to the brain's cerebellum, most known to control our balance and stability. It's been discovered the cerebellum also engages in reciprocal connections with the frontal lobes and the brain stem, which accounts for additional symptoms related to sleep patterns, mood and cognition.

"Once you understand the neuro-function of the cerebellum, which is where ET really sets up house in the brain — like many other parts of the brain, it doesn't just do one thing. There's typically a physical function, a cognitive function and an emotional function of almost every part of the brain," Sullivan explained. "One of the rules of thumb in neuropsychology is that whatever you see happening physically is typically happening in a very symbolic way in the cognitive and emotional systems as well."

"There is now a consensus that acknowledges the 'soft signs' that go along with ET. Mainly, mild memory issues, retrieval issues, attention issues and maybe some mood dysregulation," Sullivan continued. "Scientists are excited because they feel like they're understanding the disease more, but there are millions of people — ET is the most common 'movement disorder' — who live with this brain who have known that there are non-motor symptoms, specifically when it comes to cognition and mood."

Sullivan said for many of these patients, this breakthrough science and medical acknowledgment is validating. Patients who have been advised to have a "more positive attitude" about their condition or those who are sent to different specialists for other symptoms beyond the tremor are now able to link their moods and cognitive impairments to essential tremor.

Causes of Essential Tremor & Who it Affects

But what causes ET in the first place?

The cause of essential tremor is largely unknown, though there seems to be a contributing genetic component as 50 percent of cases appear to be the result of a genetic mutation that is passed from a parent to a child. Autosomal dominance of ET means a defective gene from just one parent can pass on the condition.

"If you have a parent who has the genetic mutation for ET, you have about a 50 percent chance of getting it," Sullivan explained. "That being said, the other half of people who get ET are idiopathic, meaning they have no genetic mutation that we know of."

While the majority of ET patients do not experience the onset of symptoms until the age of 40 or older, essential tremor can occur at any age — even in infants. However, if you have the genetic form, you're much more likely to experience an earlier onset of symptoms. Additionally, the severity of symptoms vary from individual to individual and progress just as variably.

At this time, there is no cure for essential tremor, but there are ways to manage and treat ET.

Options include things like medication, surgery, natural remedies and lifestyle modifications, which are meant to address ET symptoms when they become too challenging to live with on a daily basis. It's important to note patients should always discuss the best treatment options with their healthcare provider.

Symptoms of ET are quite variable. The time of day, how tired someone is, how stressed someone is, temperature and blood sugar can all play a role in symptom presentation.

"Things like stress management are super important. You really have to take relaxation seriously because stress has such a big part in it. Avoiding caffeine or any kind of stimulant, and maintaining blood sugar levels, like eating regularly throughout the day, can also really help," Sullivan advised.

While there is still a lot to unpack about ET, Sullivan is optimistic about where the research and discovery is headed. A self-described "patient-centered doctor," Sullivan said the key lies in listening to patients.

"Essential tremor is really leading the way for a new trend in brain repair and brain science. We have to listen to patients. We have to respect that the brain does multiple things. And we need to go deeper than just looking at what can be measured or visualized objectively. We have to start to respect the subjective things that patients are telling us," she said. "I really hope that we're moving towards listening more, respecting the expertise that patients and their families bring into the consultation room, and not just assuming we know it all because we read about it somewhere in a journal. ​We really need to be partnering with patients in order to move brain science forward."

This article was written for our sponsor, Essential Tremor Products.