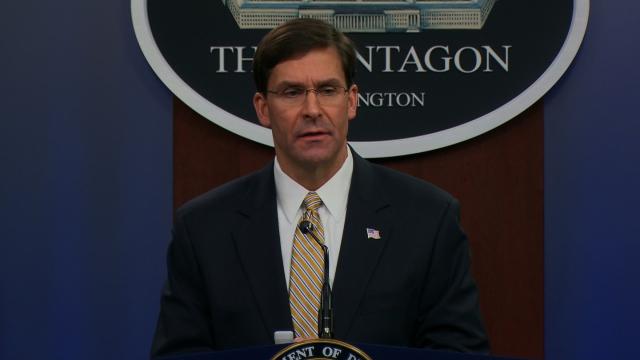 CNN — Secretary of Defense Mark Esper said Wednesday that he does not support using active duty troops to quell the large-scale protests across the United States triggered by the death of George Floyd and those forces should only be used in a law enforcement role as a last resort, comments that came after President Donald Trump recently threatened to deploy the military to enforce order.

Esper's attempt to distance himself from Trump's view on using the military to restore order went over poorly at the White House, where he was already viewed to be on shaky ground, multiple people familiar with the matter said.

"The option to use active duty forces in a law enforcement role should only be used as a matter of last resort, and only in the most urgent and dire of situations. We are not in one of those situations now. I do not support invoking the Insurrection Act," Esper said during a briefing at the Pentagon.

Esper also addressed the killing of Floyd, calling it a "horrible crime" and said "racism is real in America, and we must all do our very best to recognize it, to confront it, and to eradicate it."

"The officers on the scene that day should be held accountable for his murder. It is a tragedy that we have seen repeat itself too many times. With great sympathy, I want to extend the deepest of condolences to the family and friends of George Floyd from me and the Department. Racism is real in America, and we must all do our very best to recognize it, to confront it, and to eradicate it," he said.

Trump and other top officials, including national security adviser Robert O'Brien, are "not happy" with Esper after his Wednesday remarks, three people familiar with the White House's thinking said.

In the press conference, Esper also distanced himself from a maligned photo-op outside St. John's Church.

One White House official said aides there did not get a heads up about the content of Esper's remarks, including most notably Esper's decision to publicly break with the President on the use of the military to address unrest in US cities.

Esper's comments Wednesday came after defense officials told CNN this week that there was deep and growing discomfort among some in the Pentagon even before Trump announced Monday that he is ready to deploy active duty forces if local leaders fail to ramp up enforcement efforts.

As tear gas wafted through the air in Lafayette Park across from the White House, Trump announced from the Rose Garden that if state or city leaders refuse "to take the actions that are necessary to defend the life and property of their residents," he will invoke the Insurrection Act, an 1807 law that allows a president to deploy the US military to suppress civil disorder.

Esper and Gen. Mark Milley, chairman of the Joint Chiefs of Staff, have faced a flurry of questions and criticism in the wake of Trump's comments, pressure that culminated in Esper's appearance in the Pentagon briefing room Wednesday where he attempted to distance himself from the President's rhetoric and clean up some of his own.

Asked about his use of the word "battlespace" when discussing quelling violence on the streets amid civil unrest, Esper attempted to explain that it was "something we use day in and day out ... it's part of our military lexicon that I grew up with ... it's not a phrase focused on people."

"In retrospect I would have used different wording," Esper said.

Sentiments inside the White House toward Esper had been gradually souring before this week's episode, with both Trump and O'Brien viewing Esper as not entirely committed to the President's vision for the military.

One person suggested the White House was reluctant to fire Esper given the current crisis and the fact that there are only five months left before the election. Another person suggested Trump could leave Esper in place and push blame his way. The President has a history of letting top officials languish in positions long after he's lost confidence in them.

For months, the President and O'Brien have been losing faith in Esper's ability to lead the military and his tendency to avoid offering a full-throated defense of the President or his policies, according to multiple administration officials.

O'Brien, in particular, has spoken to the President about Esper's television remarks, which the White House has viewed on repeated occasions as problematic or off-message. On at least one occasion, O'Brien presented the President with print-outs that compare his own public remarks on a topic to those of Esper to highlight the contrast.

Trump has privately expressed frustrations with Esper in recent weeks, which aides believe would likely be accelerated by his comments about the ongoing nationwide protests. He vented about Esper at length during a recent weekend at Camp David, according to multiple sources.

Those complaints have raised questions about Esper's future at the Pentagon should Trump win a second term, but his comments from the Pentagon briefing room Wednesday have prompted speculation that the timing of his departure could be moved up, the source said.

"I think this is the end for him," they added.

A US official close to Esper and familiar with White House thinking said the secretary is being "skewered" by those inside the White House for coming out Wednesday to express his views.

"(I'm) not sure who thought that was a good idea," another official told CNN.

In December, Esper sat for an interview with Fox News' Bret Baier at the Ronald Reagan Defense Forum and when asked what it was like to work for Trump, he responded, "he is just another one of many bosses I've had and you've had your time that you learn to work with."

The remark irritated the President, who tends to expect lavish praise from his Cabinet, according to two administration officials. O'Brien, by contrast, almost never breaks with the President in his public remarks. O'Brien, who took over as national security adviser last September, is said by multiple administration officials to have expressed some level of interest in the job of either secretary of state or secretary of defense, should either of those positions become available.

On Tuesday, White House officials scratched their head at an interview Esper gave to NBC News claiming he did not know he was walking to St. John's church on Monday with the President. Officials said the plans were clear inside the West Wing and that Esper's explanations made little sense. Esper clarified on Wednesday that while he knew they were going to the church, he did not know the movement would turn into a photo opportunity.

In the hour after his press conference ended, Esper was seen arriving at the White House alongside Milley and Attorney General Bill Barr.

The trio stood together, all wearing masks, for a few moments before entering the building.

On Tuesday, the Democratic chairman of the House Armed Services Committee, Rep. Adam Smith, called on both Esper and Milley to testify before the panel in an open hearing next week and "explain this domestic engagement to the American people."

"I have serious concerns about using military forces to respond to protestors. The role of the US military in domestic US law enforcement is limited by law. It must not be used in violation of those limits and I see little evidence that President Trump understands this fundamental premise," he said.

But while Esper attempted to clarify his view on using active duty troops to rein in protesters Wednesday, Milley was notably absent during the press briefing.

When asked why he was not present, a defense official told CNN it is because Milley believes it is up to the political and civilian control to explain the current situation.

Milley was at the White House on Monday in his battle fatigues and walked over to St. John's church with Trump's entourage but did not participate in the actual photo-op that occurred.

Later Monday night, Milley traveled the streets checking on protests and the security response. The Military Times caught up with Milley who talked about the right of people "to protest, but protest peacefully."