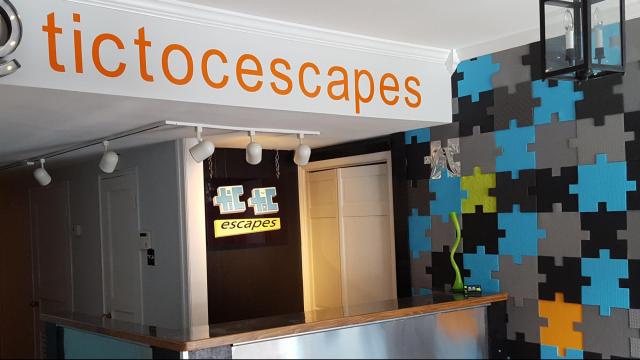 Raleigh, N.C. — You are handed a clue before the door is shut. You are locked in a room with only an hour to figure out how to get out.

Well, welcome to the concept of an escape room. They are popping up everywhere and are actually pretty fun. The Triangle boasts three escape room concepts now - Cipher Escape in Morrisville, Raleigh Room Escapes in Raleigh (which offers the Trapped in a Room with a Zombie escape) and now Tic Toc Escapes in Raleigh's Five Points.

Tic Toc is the brainchild of the Lawrence family, who develop each escape room's puzzles themselves.

The family describes itself as a "mix of personalities and skills that make a balanced team."

Tic Toc held a blogger night, and I was lucky enough to join a few of my favorite local writers in trying to escape "The Green Room." The scenario is that you are a music group who needs to get on stage in one hour, but you are locked in the green room. This room requires a minimum of three people. There can be up to eight players, but it isn't that big so five or six should probably be your goal if you are going with a group of friends.

I can't reveal much about the puzzles in "The Green Room," but I can tell you the pitfalls we ran into and how to, hopefully, avoid them:

At this time, there is one other escape option at Tic Toc - "Night at the Mausoleum," which is a little more spooky than the "Green Room." The game is for two to four players.

Reservations for can be made online for either room. Admission is $30 per person. There is a promotion going on through the end of the year that will save you 18 percent on one game in the "The Green Room." Just use code: NKOTB when you make a reservation.

Overall, the adrenaline of being an escape room and the brain power it takes to try to get out equals a pretty fun way to spend a date night. Just in time for the holidays, Tic Toc will open its third escape room - "A Very Tacky Christmas." Owners say the room scenario will be that Santa is stuck in the chimney and you have one hour to help him out so he can get back on track with the gifting.