Erwin, N.C. — Authorities in Harnett County tell WRAL News that the woman shot Monday while out running errands has died.

Officials said Margie Pipkin, 72, was hit by gunfire at an intersection in Harnett County.

Shortly after Harnett County Sheriff Wayne Coats held a press conference on Wednesday, Artis Elliott surrendered to authorities in connection with the crime.

"We do have warrants for first degree murder and they are on Artis Lewis Elliott of Beaver Dam Road," Coats said.

Coats said Elliott, 29, and his attorney had agreed he would turn himself in on Wednesday morning and did not, making him a fugitive at that time. Artis later turned himself in at the Harnett County Detention Center.

By Wednesday afternoon, he was being held without bond.

"[For her to be] going about her daily duties and get caught up in something like this is disturbing," Coats said. "There are no words I can say to ease the pain of the children."

Coats said the shooting is part of an ongoing feud in the area. Authorities said they do not believe Pipkin was the intended target. The shooter was aiming for someone in a another vehicle, according to Coats. 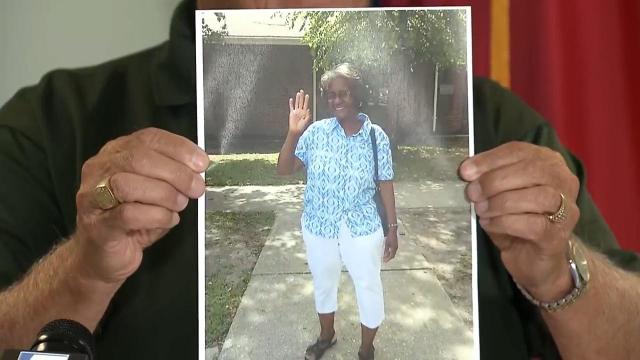 The shooting happened on Beaver Road in Erwin. Pipkin was going out to do her daily chores when she was hit while in her pick-up truck. She died on Tuesday night.

"She was loved by the community," Coats said. "That's what really set me off, was the innocent bystander."

Coats said the shooting was the result of "two idiots acting foolishly just shooting, and she got hit.

"Thinking about it, I can't really fathom what happened. It's disturbing when you think about it," said Dominique Smith, the victim’s cousin. "This could have been anybody."

Five other shootings have happened in the same area this year, Coats said. Four of the shootings were in June, all of them remain unsolved, and two resulted in death.

Coats said he does not know if this shooting was gang- or drug-related, and also is not sure if the previous shootings were connected to Monday's shooting.

Witnesses say that two cars were involved in the shooting, a black sedan and a tarnished Mercury Marquis.

Coats is asking that anyone with information about the recent shootings call his office's tipline at 910-893-0300.