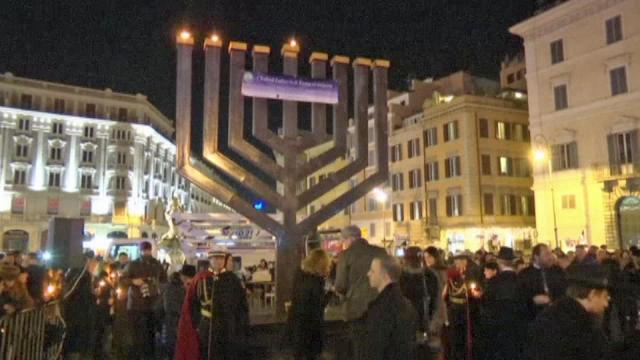 EDITOR'S NOTE: Eric Solomon, a congregational rabbi in Raleigh, can be followed on Twitter @rebericsolomon.

A few years ago, my assistant, a devout Christian, reminded me about a meeting scheduled for later in the day.

“Rabbi, you are set to meet with a minister from a large congregation just outside of Raleigh. I don’t believe you have met before but he was familiar with your work. Knowing how committed you are to interfaith dialogue, I figured you’d be up for it. I know it is a really busy week. Is it still ok?” My assistant asked.

What transpired next was one of those experiences that happens all-too-often to non-Christian clergy in our rapidly changing corner of the Bible Belt.

The minister, crisply dressed and with a Bible in hand, smiled widely as I welcomed him into my office. He promptly took a seat on the couch.

“I know you are busy, Rabbi, so I’ll get to the point. I had a dream a few weeks ago that my Lord and Savior was calling on me to save a soul and bring him to Jesus just in time for Christmas,” he explained.

“Oy vey. … So much for interfaith dialogue,” I murmured to myself.

“And, God asked me to find not just a Jew, but a rabbi. So, I googled “Rabbi” and “Raleigh” and your name came up first. That’s when I knew I had to come here and bring you on the right path.”

I admit I was annoyed, really annoyed. I was busy serving my congregation and preparing for the Hanukkah holiday. The utter chutzpah (nerve).

It had been years since someone had tried to convert me to Christianity. One of my most searing memories happened when a kid on my middle school soccer team decided to tell me that I couldn’t participate in the pre-game prayer because “I was going to Hell.” He didn’t say it in a mocking way; it was matter-of-fact. I was stunned.

I have always been exceedingly proud to be Jewish and never considered converting for a moment but I confess that the thought arose in my young heart, “Does he think there is something wrong with me simply because I am a Jew?” The thought alone shook me. We never spoke again.

Most Jewish Americans, especially those who live outside of the big cities, have had experiences where earnest Christian friends try to share their religion with a concern for our souls. There is something kind-hearted about it, but there is something anti-Semitic about it too.

It assumes that there is a flaw in the billions of human beings who are not Christian and who will never become Christian. Doesn’t our shared scripture declare that all human beings are created in image of God?

I once asked one of my congregants, a Holocaust survivor, what was most difficult about being a Jew in Poland before the war.

“The worst time of the year, bar none, was Easter. A few days prior, when they would re-enact the Passion Play, the youth would come out of the churches looking for Jewish kids to beat up. All the Jewish parents made their kids stay at home,” he said.

It’s a very slippery slope from thinking a person’s soul is going to Hell to actually sending him there. Take it from me. My people knows.

Sadly, two newly-elected North Carolina politicians have brought this issue to the fore. Lt. Governor-elect Mark Robinson who engaged with a minister in an internet dialogue where anti-Semitic canards were shared, and Congressman-Elect Madison Cawthorn who professed his zeal in a recent interview for converting non-Christians, especially Muslims and Jews. Both are passionate Christians. With that, I have no quibble.

But when these public servants’ views spill over into targeting the Jewish community for either conspiratorial hate speech or proselytizing, they must be called out.

Gentlemen: if you wish to represent North Carolina and all of its Muslim, Sikh, Buddhist, Hindu, Bahai, Jewish and atheist citizens, then you must embrace all of us for who we are, not who you wish for us to be.

This week, Jewish families throughout North Carolina will gather to light their Hanukkah menorahs. The Sages once debated: Should we light eight candles on the first night and decrease each successive night or should we start with one candle and increase?

Their two-thousand year old answer: “We rise in holiness and we never go down.” Hanukkah must be about adding candles of light to the world in a time of darkness. Religion, at its best, is about adding holiness, never subtracting it.

When proselytizers, even well-meaning ones, openly target people of other faiths, the message is clear: Non-Christians must be subtracted from the world.

In quick order, I escorted the minister out of my office and past my assistant’s desk. From my look, she could tell that the meeting did not go well. Her face turned sullen.

“Oh, Rabbi, I am so deeply sorry. You know that there are millions of Christians like me who are abiding in our faith but would never try to convert you. We focus on our own spiritual lives, our failings, and practice ‘Love your neighbor’ as our main principle.”

I nodded in agreement as I know that many American Christians do not see Jews as broken souls in need of fixing.

And yet, Mark Robinson and Madison Cawthorn apparently do. Therefore, I turn to my Christian brothers and sisters for help.

Instead of focusing on people like me, I urge you to turn your energy towards your two brothers serving our state. Help them to realize that Christianity is at its best when it is about adding more love and respect for one’s neighbor, not subtracting it.

When I light the Hanukkah menorah with my family this week, I’ll add in a special prayer for these two leaders.

Don’t worry. I will not pray that they abandon their religion. That’s not the Jewish way.

Instead I will pray that God will help them in this holiday season to focus more on healing their own souls and less, supposedly, on healing mine.

Like the Rabbis explained about the Jewish Festival of Lights:

More light every night, not less.