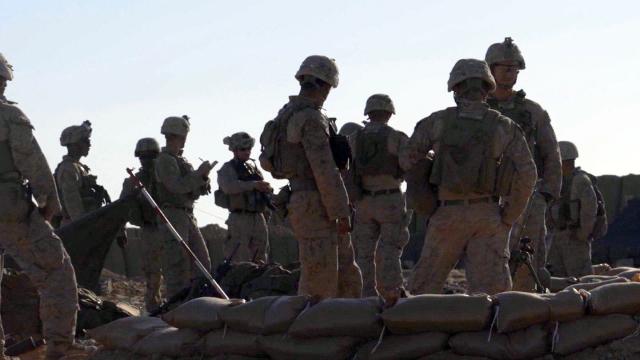 (CNN) — US National Security Advisor John Bolton made "a serious mistake" telling reporters that the United States would only pull out of Syria if Turkey pledged not to attack its Kurdish allies there, Turkish President Recep Tayyip Erdoğan said Tuesday.

"Bolton's remarks in Israel are not acceptable. It is not possible for me to swallow this," Erdogan said during a speech in parliament. "Bolton made a serious mistake. If he thinks that way, he is in a big mistake. We will not compromise."

The extraordinary public rebuke comes as the US has been sending starkly divergent messages on Syria and signals further tension in the US-Turkey relationship. President Donald Trump announced late last month that the US had defeated ISIS in Syria and was pulling its 2,000 troops out of the country "now."

But Bolton -- who is currently on a four-day trip to Israel and Turkey -- appeared to add several conditions to Trump's announcement, saying over the weekend that the withdrawal was contingent upon preventing ISIS from reviving itself and on obtaining security guarantees from the Turks for US-backed Kurdish fighters in Syria.

And White House sources say the President himself agrees with Bolton.

The new US conditions -- five of which Bolton presented to Erdogan, according to a State Department official who would not reveal what the conditions are - along with the physical requirements of a withdrawal, mean the US presence could be indefinitely extended, effectively reversing the agreement that Trump made with Erdogan about a withdrawal.

"We don't think the Turks ought to undertake military action that's not fully coordinated with and agreed to by the United States at a minimum so they don't endanger our troops -- but also so that they meet the President's requirement that the Syrian opposition forces that have fought with us are not endangered," Bolton told reporters in Jerusalem on Sunday, Reuters reported.

Turkey considers several Kurdish groups -- including the People's Protection Units, also known as the YPG -- to be terrorist organizations. The YPG is the backbone of the Syrian Democratic Forces, which is the main US partner on the ground in the battle against ISIS and has controlled a large swathe of northern Syria for the past several years.

Trump's initial withdrawal announcement blindsided US allies -- not least the Kurds -- but was praised by Erdogan, who launched an operation in northwest Syria last January to clear the border area of Kurdish fighters.

Now, people familiar with the President's thinking say Trump's position has shifted so that he feels that he and Bolton are on the same page on Syria -- even as Bolton all but reverses Trump's earlier order for an immediate withdrawal of troops.

One source says Trump's briefing with commanders in Iraq on December 26 was a pivot moment in his thinking. They advised him that ISIS was not entirely eradicated in Syria and that withdrawing all US troops there would have a negative effect. Before this, Trump had only heard that from administration advisers like Bolton and former Defense Secretary James Mattis.

Hearing it from uniformed brass on the ground drove home the message and changed his thinking, according to this person familiar with the matter.

Trump has been furious at Bolton in the past over steps he believed were meant to circumvent him. When the national security adviser floated the idea of a military intervention in North Korea, as the US did with Libya, Trump privately asked his team what Bolton thought he was doing and said as much to Bolton in person, according to multiple people familiar with the matter.

This time, the only frustration Trump feels is about the perception that he's being walked back by advisers, which he does not believe is the case, sources tell CNN. One person familiar said they thought the difference this time may be Bolton's ability to bend the President's ear and convince him he's still fulfilling his promise, just going about it differently.

No surprise this time

And unlike the comments on North Korea, Bolton's remarks in Israel and Turkey did not catch the President off guard. But they are set to further strain ties with Turkey, which is deeply sensitive about the Kurdish issue.

In late December, the YPG announced it was withdrawing from the flashpoint town of Manbij, and called on the Syrian government forces to protect the area from an incoming Turkish attack.

"We completed our military preparations. We are determined to take steps on YPG. We will soon move to eliminate terror groups in Syria," Erdoğan said Tuesday.

US National Security Council spokesman Garrett Marquis did not respond directly to questions about whether Erdogan had cancelled an appointment to see Bolton while the national security adviser was in Turkey. In a statement, Marquis said that Bolton had a "productive discussion" with Erdoğan's senior adviser Ibrahim Kalin on Tuesday.

"They had a productive discussion of the President's decision to withdraw at a proper pace from northeast Syria, identified further issues for dialogue, and emphasized the strong bilateral relationship between the US and Turkey," said Marquis.

"The US looks forward to the ongoing military-to-military consultations today on our cooperation in Syria," Marquis said.

The Syria announcement handed victories to Russia and Iran, betrayed Kurdish allies on the ground, undermined Israel, appalled lawmakers and triggered resignations from Defense Secretary James Mattis and the senior State Department official in charge of the anti-ISIS campaign.

Trump's agreement with Erdogan also undercut a central administration goal of containing and beating back Iran -- a primary focus for both Bolton and Pompeo.

Pompeo, on his own trip through the region, insisted during a press conference in Jordan that the planned US withdrawal from Syria does not affect the anti-ISIS coalition's ability to pursue the terror group or push back on Iran. He did not answer a question about the Turkey's role given Erdogan's rebuke of the Trump administration.

The coalition is "just as effective today as it was yesterday," Pompeo said, adding that he is hopeful it will become increasingly effective in the future.

"This is not just about a particular tactic that we take amongst the coalition. This is about a combined understanding that the most significant threat to the region is Daesh and the Islamist Revolution and their revolutionary efforts in the region," Pompeo said.

"There is enormous agreement of the risk that poses to Jordan and to other countries in the neighborhood, and that'll continue," the top US diplomat said. "So our President's decision to withdraw our folks from Syria in no way impacts our capacity to deliver on that."

And Pompeo hinted at further economic sanctions against Tehran. "You'll see in the coming days and weeks we are redoubling not only our diplomatic, but our commercial efforts to put real pressure on Iran to achieve what we set out for them back in May," he said.

Pompeo has repeatedly refused to put a timeline on the US withdrawal, creating another source of uncertainty for US allies.

Kalin, Erdogan's senior adviser, said Tuesday that Turkey's main concern is "the future of American bases" after US troops withdraw from Syria.

"We are happy with Trump's withdrawal decision, but what will be left behind -- the future of American bases, logistical centers and heavy weapons are important for us," Kalin told a press conference from Ankara.

"The important issues for us is what will happen to arms delivered to PYD/YPG and how and when America will finish their engagement with the YPG. Complete seizure of arms is Turkey's main expectation."