Epsilon is now a Category 3 Hurricane 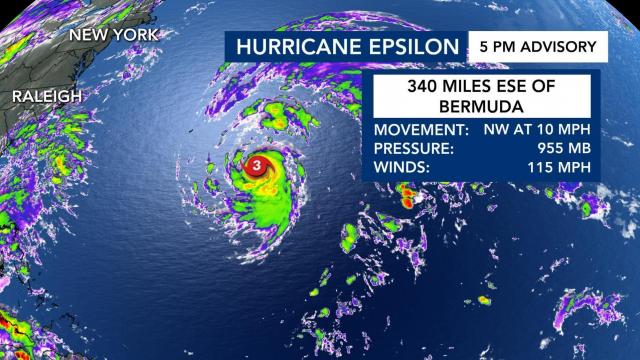 The National Hurricane Center upgraded Hurricane Epsilon to a Category 3 storm Wednesday evening, noting that it was quickly gaining strength as it approached Bermuda.

“Epsilon has continued to defy expectations and rapidly intensify this afternoon,” the National Hurricane Center said in a statement. The storm now has sustained winds of more than 115 mph, making Epsilon the fourth major hurricane of the season, which still has more than a month to go.

Epsilon was moving northwestward over the central Atlantic at about 10 mph, according the center’s 5 p.m. Eastern advisory.

It was about 315 miles east southeast of Bermuda, where a tropical storm warning was in effect, meaning that tropical storm conditions are expected somewhere within the area within 36 hours. Hurricane-force winds from Epsilon extended outward up to 25 miles from the storm’s center and tropical-storm-force winds extended outward up to 450 miles, mainly to the north of its eye.

The storm was expected to turn toward the north-northwest Thursday and was forecast to make its closest approach to Bermuda that afternoon or evening, the center said. It could also strengthen over the next day or two. The storm is not expected to make landfall in the United States'

Epsilon is also forecast to create large swells that could affect Bermuda for the next several days, the center said, and they are likely to cause life-threatening surf and rip-current conditions.

Hurricane Paulette was one of the most recent storms to affect Bermuda, knocking down power lines but causing only minimal property damage when it made landfall there Sept. 14. The storm hovered over the island longer than the Bermuda Weather Service had predicted. Hurricane Teddy passed to the east of the island Sept. 21, triggering tropical storm conditions in Bermuda.

Dennis Feltgen, a spokesman and meteorologist with the National Hurricane Center in Miami, has called the 2020 hurricane season “hyperactive” compared with the average hurricane season, which typically produces 12 named storms, including three that develop into major hurricanes.

“This is a large storm,” Feltgen said, noting that Epsilon was expected to come close enough to Bermuda to cause tropical storm conditions on the archipelago.

In May, NOAA predicted an above-normal season in the Atlantic, but in August, government scientists updated their outlook.

In recent decades, scientists have seen increased hurricane activity in the North Atlantic, by a measure that combines intensity with characteristics like duration and frequency of storms. Climate scientists say there are links between global warming and at least the intensity of hurricanes. As ocean temperatures rise, hurricanes grow stronger as warm water serves as the fuel that powers them.

The previous hurricane, Delta, brought floods and destruction to an already battered Louisiana. The storm made landfall some 20 miles from where an earlier hurricane, Laura, touched down weeks earlier, intensifying the devastation the state had experienced during a brutal hurricane season.